A Late Arrival – Playing with our New Toys

Ah, it’s great to be back in beautiful Sri Lanka!  Arriving at the Colombo airport, severely sleep-deprived after the two-day journey, the tropical heat and light washes over you.  It’s difficult to imagine there are ice storms anywhere, even in late February.  The trip into downtown is a riot of color and a cacophony of street sounds; buzzing and beeping tuk tuks, motorcycles weaving through stalled traffic, buses bullying their way, clearing the road with claxon blasts.  Brightly colored saris flash here and there, and gaggles of uniformed school children gleam in bright white.  Tropical trees crowd the too-narrow streets between rows of crumbling stalls lining the way. 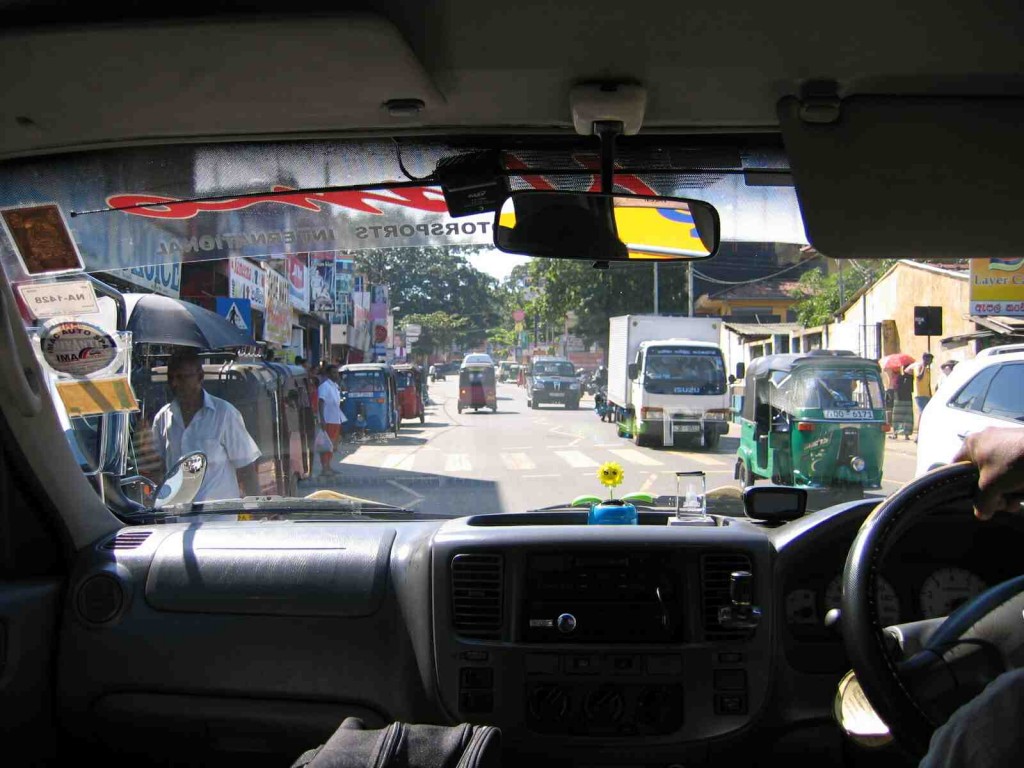 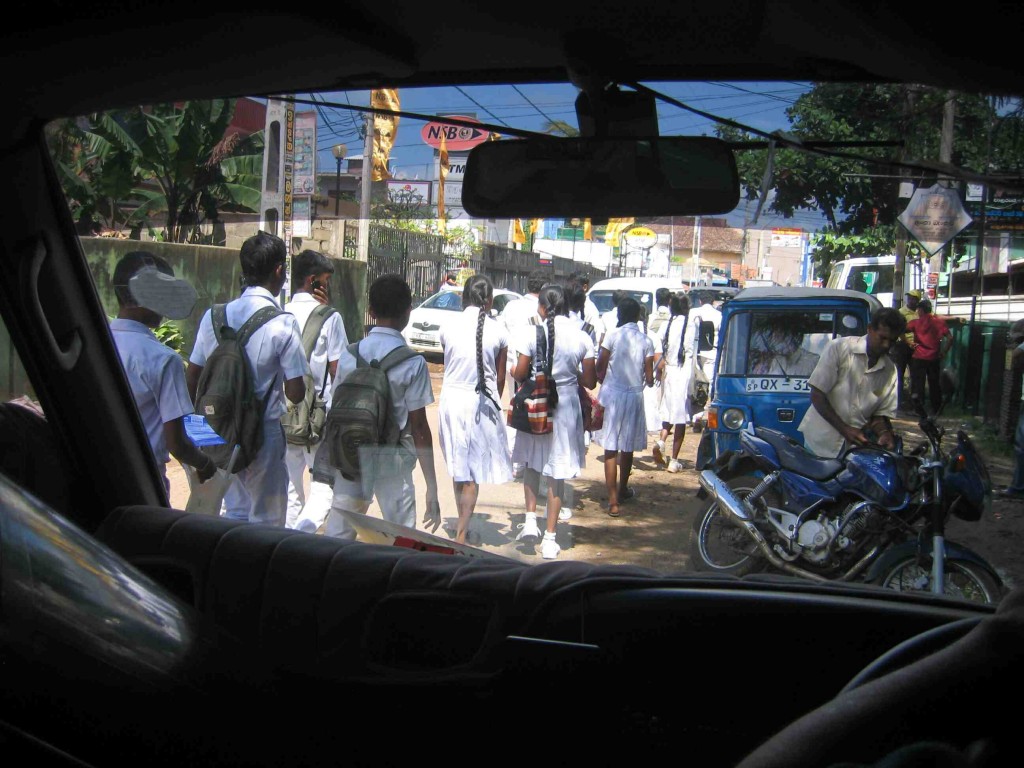 The Grand Oriental Hotel is reached at last, in its tarnished but persistent glory, at the heart of the port city, with its views of the cranes and tugs and container ships busy about their work.  If you’re lucky, you get a few hours of sleep in a prone position before heading out of Colombo once more on the long, hot ride to the south coast.

The final couple of hours of the road trip wind along the southwest coast, past glorious beaches shaded with coconut palms, surf shops and beachfront hotels.  Beautiful blue water curls in waves onto pale sands or black rocks.  Tourists surf out at the breakline, while traditional Sri Lankan fishermen perch atop their poles in the shallows like strange, gigantic wading birds. 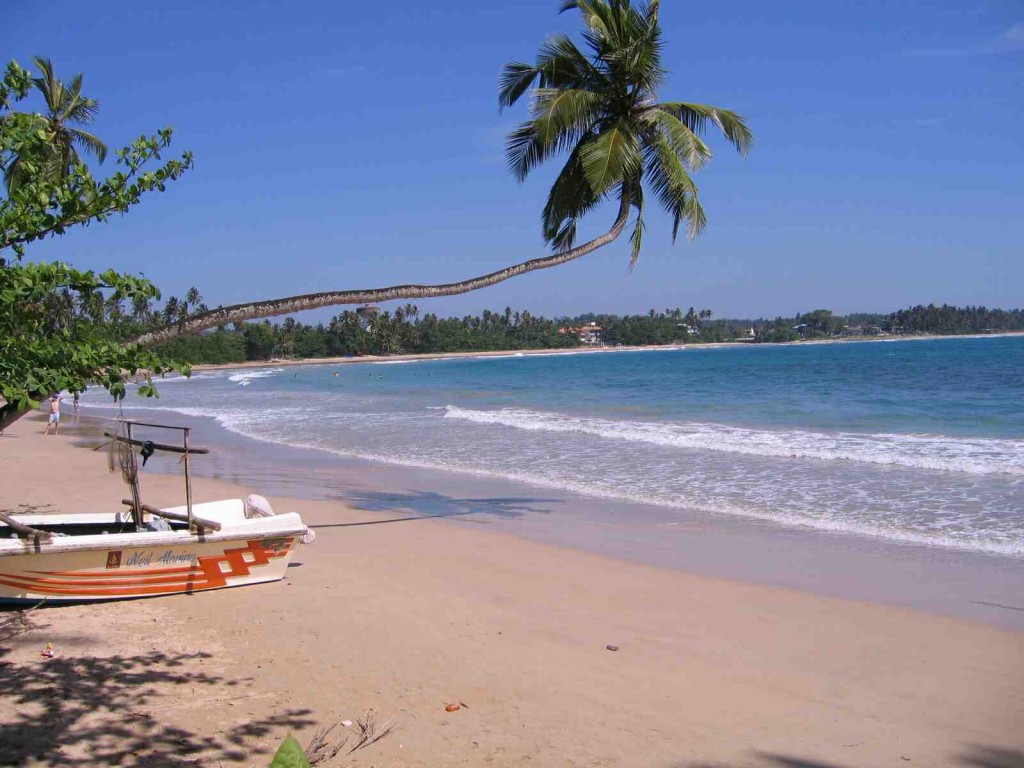 Our adopted little village of Ambalantota is within walking distance of a couple of such beaches, and is crowded with palms and mimosas, loud with parrots, ravens and peacocks.  There are monkeys in the trees, monitors in the swamp behind the house, and two young cats on the veranda, demanding food and attention.  The weather this time is drier, and the house does not have the pervasive damp of last year.  For the last three days, there has been a funeral going on down the street.  Crowds of people and vehicles choke the road, which is also festooned with white banners above and on both sides, and a loud speaker goes for hours at a time, with a strident male voice proclaiming on and on in a language we do not understand, no doubt reciting the virtues of the dearly departed, and/or delivering admonitions to better behavior by the living.  Every time we need to venture into town or to the harbor, we feel we are interrupting the solemnities, for our only way out is through the middle of it.

But on to the task at hand.  Having learned from last year how inefficient it can be to rely upon the equipment available locally, we have shipped a freight container here, with most of what we will need for the project.  The container’s chief cargo is a recompression chamber mounted within, freshly re-fitted, with its integrated air and oxygen banks, the whole thing conveniently shaded by the container itself.  It is a thing of beauty.  The container also holds 16 large diving cylinders to extend our bottom times, a couple of inflatable boats with outboard motors to support diving operations, and an assortment of everything else that could be squeezed in to outfit the house and support the project.  Of course, getting the container from the port in Colombo to the port in Hambantota was a considerable challenge, not the simple logistics of loading it on a truck and unloading it again, but the bureaucratic nightmare of clearing it through customs in Colombo and obtaining permission to place it and ourselves within the secure area of the Hambantota port.  That took a surprisingly long time to accomplish.  Well, it would have been surprising, had we not experienced so many similar challenges last year.

At last our beautiful container was on the ground in the harbor and available to us, and opening it up was like Christmas.  The locals were not shy about displaying their curiosity, gathering around as the seals were broken.  Household goods and diving gear were transported to the house to be sorted out and to make room for the chamber and boats to be accessed.  The obvious immediate need was for all the gas cylinders, that had to be transported empty for safety reasons, to be filled with the required gases; the oxygen bank had to be filled with O2, the air bank with air, and the diving cylinders with nitrox 32, so that is what we are working on now.

The six large oxygen cylinders, required to run a recompression treatment in the unlikely event that one is required, have fittings that do not match the Sri Lankan oxygen delivery systems, so those are now being changed, by our ever-resourceful and seemingly infinitely capable welder, of course.  Once those valve fittings are changed, the cylinders will have to go to Colombo to be filled. 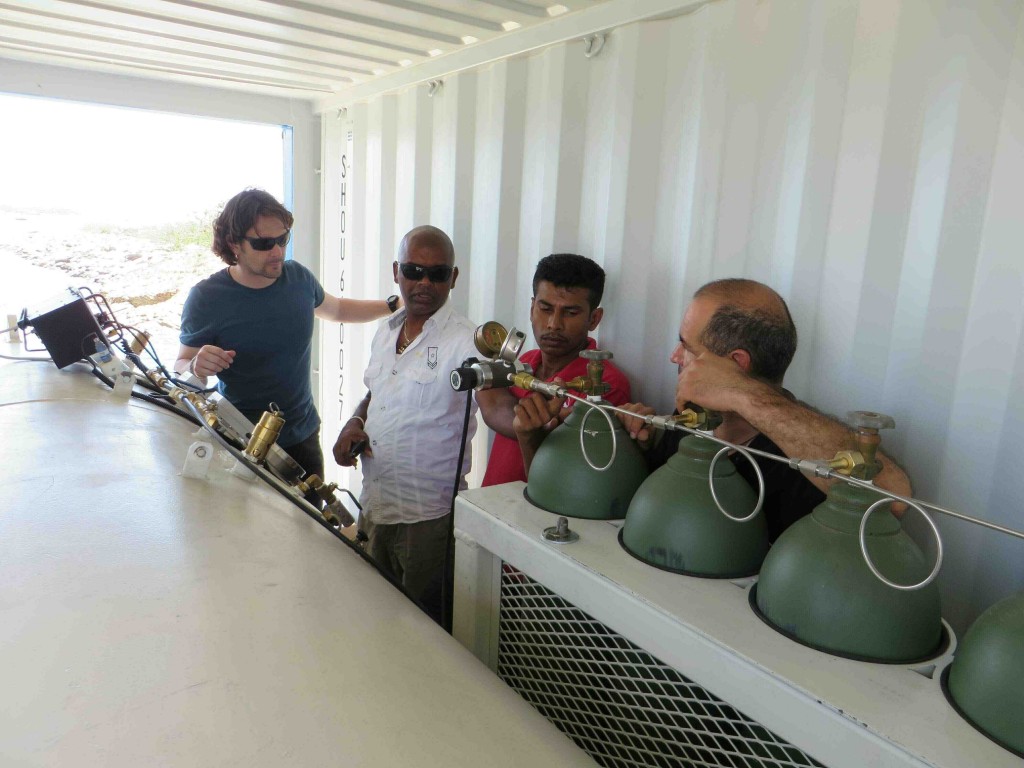 From left: Orkan, Preminda, the welder and Zafer discuss how to fill the chamber’s O2 bank. Photo by K. Trethewey.

On a side note, while at the welder’s shop working on the fitting changes, another technician was busy adjusting a vintage prosthetic leg he had brought in tied to his bicycle. In the end he removed the foot and sawed a bit off the top, and the knee and ankle appeared to articulate adequately when reassembled. Off he then went with it again tied to his bicycle. In our experience and observation, there is little that the welding shop cannot accomplish. 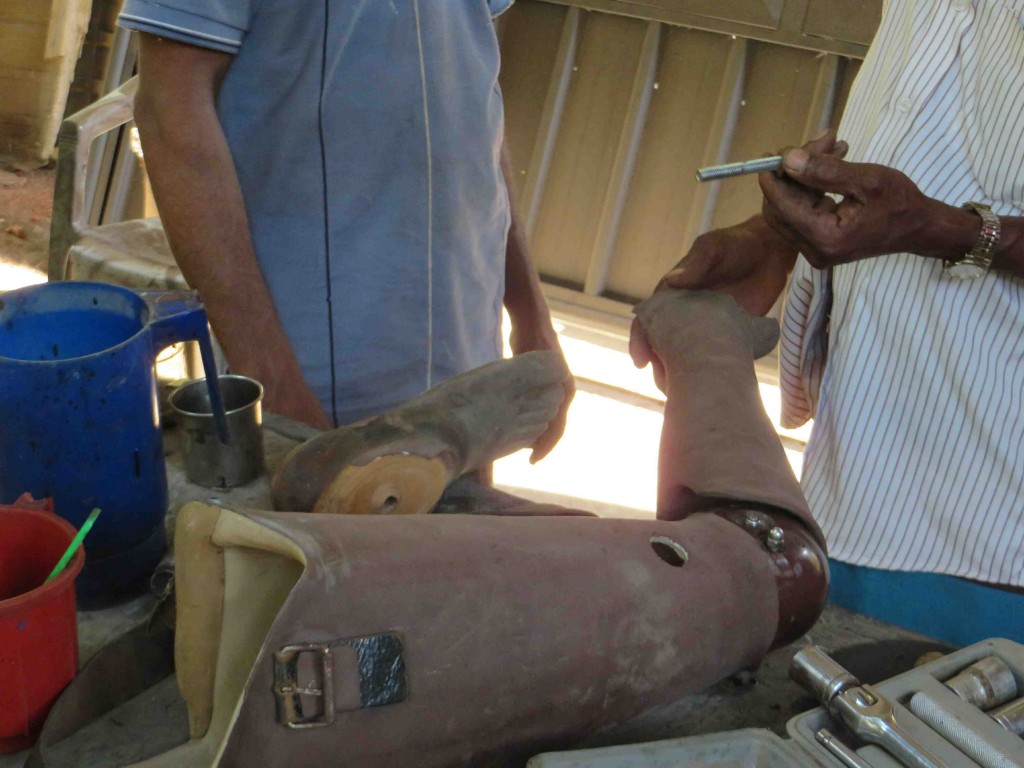 The welding crew adjusts a prosthesis. Photo by K. Trethewey.

The chamber’s air bank, used to pressurize it to simulate the sea’s pressure at depth for an injured diver, we can fill ourselves, once we get our compressor up and running.  It is a loaner, but seems to be in far better condition than the one we were lent last year.  It runs on diesel, so powering it in the harbor will not be a challenge such as we faced last year with our electric compressor that required non-standard voltage.  It does, however, have a leaky diesel fuel tank, as we experienced intimately on our six hour ride in the van with it from Colombo to Ambalantota.  So we will have to have that mended before we can fill the air bank.

The diving cylinders we will also be able to fill ourselves, as we will make nitrox with air and bottled oxygen and pump it with the diesel compressor.  We will obtain the oxygen in Sri Lankan standard cylinders from the welder without an issue.

And finally, our medical oxygen bottles, used on the boat in case of emergency, also need to be re-filled after transport. We have not yet sorted out how and where that will happen, as they have a different fitting again from both of the other O2 cylinder types we will be using.

Once all the cylinders are filled, the boats will be the next challenge, assembling and inflating those still in their cartons, and outfitting the fishing boat for diving operations at the site.  And that raises the spectre of the mooring.  Last year, of all our seemingly interminable series of challenges, the chief among them was the issue of mooring the surface support platform over the site easily and reliably every day so divers could work safely in deep water in rough conditions with strong currents.  We have a different vessel hired this year, with a different crew, so we can only hope that our experience with that challenge will be different this year, but it is difficult not to look out past all these present issues we are steadily overcoming and not fear the big one waiting for us upon their resolution.

Meanwhile, just like last year, we are managing two or three or four logistical challenges inherent in working under water in a developing country at any one time, and working our way toward getting onto the site and doing the discovering we all came here to do.  Angie, a dear friend from excavations past in Turkey, is here cheering us all with her enthusiasm for adventure, sunny disposition and marvelous food.  A breakfast visit from a particularly large monitor began our day, and reminded us for the thousandth time of just how cool it is to be here. 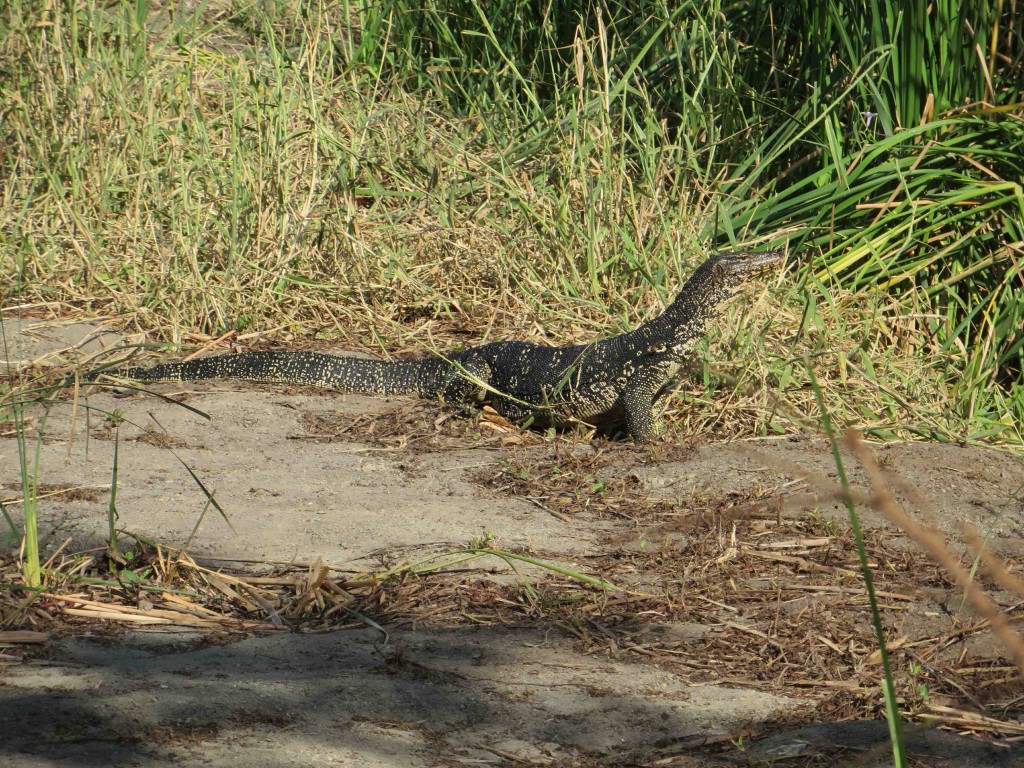