During WWII there was a small, emergency airfield for allied aircraft on the island of Vis in Croatia. In December of 1944 a US B-24 Liberator was trying to make the landing strip after being attacked by German aircraft when it lost power and crashed into the sea close to the island. The aircraft, known as Tulsamerican, is notable because it is the last B-24 bought and produced by the Tulsa, Oklahoma community in their local Douglas aircraft factory. The aircraft is a community icon, highly photographed and with many personal stories. This project was a viability survey of and analysis of this aircraft for inclusion into a field school, which will part of a regional survey and focus on the documentation and possible partial recovery of sections of the wreck.

Tulsamerican hit the water at an angle at a high rate of speed with the bomb bay doors open and gear down. This caused the fuselage to wrench apart into two sections, the aft section sinking into deeper water at 180 feet. The forward center section remained intact, but the cockpit area completely disintegrated, forcing the cockpit and nose turret to become detached from the rest of the forward section, but all three pieces are at 130 feet depth. The aircraft was discovered in 2010 and placed under protection by the Croatian Conservation Institute (CCI). They also removed some artifacts from the wreck along with a data plate for identification. The aircraft is war grave, whose three missing persons fall under the jurisdiction of the Joint POW/MIA Command, and the aircraft itself belongs to the US Air Force. The site is under the jurisdiction of the Croatian Ministry of Culture, and archaeological activities require permitting. This survey did not require an archaeological permit due to the fact that all proposed activities were allowed under a normal diving permit. Still, I notified the Ministry and Conservation Institute of my intent and kept them informed at all times during the survey.

Megan Lickliter-Mundon arrived in Croatia on September 23rd, 2014. There she met two representatives from the Croatian Conservation Institute at their warehouse for artifacts in Split. Lickliter-Mundon examined and documented the artifacts brought up in 2010 which were as follows:

1x Perspex lens for it 1x data plate from cockpit

bullets in clip from 50 cal

Enough photos of the flak jacket and radios were taken to attempt a 3D model and the rest of the items were photographed with a scale. A quick conservation assessment of the metal finds was performed as well. All the pieces, except the data plate and the signal torch, had been allowed to dry out and were kept in open air. The data plate had been conserved and the torch is being kept in fresh water.

Megan Lickliter-Mundon travelled to Vis, which is about two hours south by ferry from Split. She was joined by Bridget Buxton from University of Rhode Island and Donat Petricioli, a Croatian native who has dived on the B-24 site and knows the region very well. They stayed with representatives from VideoRay, a company that manufactures, sells, and rents small ROVs. Due to the depth of the site future survey will include ROVs to reduce the number of dive hours and the danger of the project. They dived the wreck twice for around ten minutes a dive, the first time for site orientation and some metal analysis, the second dive was to acquire images to make a trial 3D model of the lowered landing gear. Megan Lickliter-Mundon also took video of both the forward and aft sections of the wreck for conservation analysis and stills. 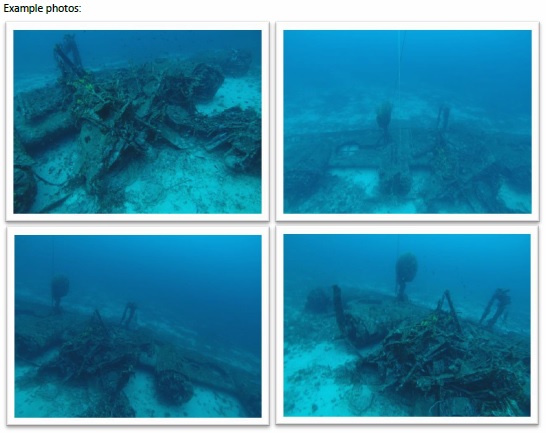 While in Vis, Lickliter-Mundon met with two local dive agencies, the one they dove with and another on the island, and local accommodation contacts for the future survey work. After returning to the US Lickliter-Mundon has been able to run the photos through Photoscan software to test the results. Results so far have been encouraging and suggest that a full 3D model is possible. This first test run of photos through the software will inform the process in the future, especially camera orientation and timing. 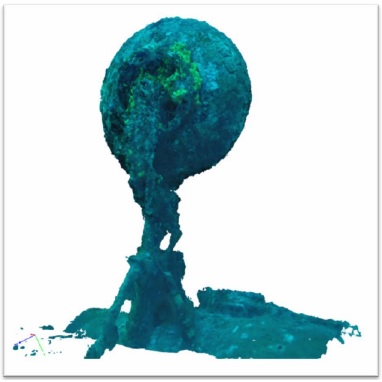 The landing gear of the B-24 Tulsamerican wreck site after rough modeling in Photoscan software (Photo: Megan Lickliter-Mundon).

Work Remaining to be Completed

This imaging and conservation analysis survey is part of two larger projects, one a larger-scale survey of the same site, and the other as part of a regional survey of all cultural remains around the island. Data obtained from this preliminary survey is around 50% processed and must be fully studied to accurately plan a larger survey. Megan Lickliter-Mundon will fully finish processing 3D models for two areas of the wreck and study the results to better plan photo acquisition in the future survey. The conservation analysis and feasibility assessment of the site has proved successful as well. The metal is intact enough the attempt recovery of small items, if permitted, for conservation and display at Tulsa Air and Space Museum.

If funding allows, Bridget Buxton, an associate professor at University of Rhode Island, and Megan Lickliter-Mundon will undertake the regional survey in late 2015. At the moment the only planned additional project is the complete survey of the B-24 site, which will be in May of 2015.

She plans to present one of the models at the Underwater Intervention conference in New Orleans in February 2015. There are currently no plans to publish the results of this preliminary survey outside of her dissertation.