The Anaxum Project has two main goals for the 2014 field season: 1) continue the work of recovering the cargo and 2) recording the remaining structures of a Roman bridge. Although the cargo immediately on top of the Stella 1 shipwreck was excavated in the 1990s, the entire site contains a large debris field which extends to the north for 60 meters.

Last year, in 4 weeks, a 8 x 8 meter area of this debris field was excavated and raised. The recovered materials during 2013 weigh 1.993,2 kg, in which embrices and bricks represent  78% of the total.  Of all the artifacts recovered, 400 show a significant historical and scientific value (amphorae, terra sigillata, fine pottery, coins, etc.), which we are studying now. 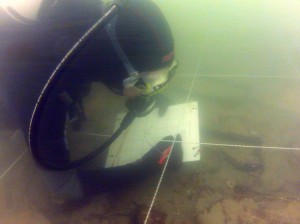 It is the goal of the 2014 field season to record and recover several more meters of finds from the shipwreck site. All artifacts are sketched in situ and raised by a 2 x 2 meter square area. Once on the surface, the artifacts are rinsed, sorted, and weighed by this same 2 x 2 meter square area, allowing for interpretation of the tonnage of material that the wreck (or possibly wrecks) was carrying.  This is the same methodology that was used for the 2013 field season. 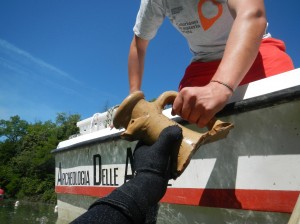 Diving commenced on site on June 23rd and by June 26th, the first artifacts of the season reached the surface. The team is currently working on recovering the artifacts from the area immediately near and atop the Stella 1 boat so that the wreck may be re-opened for additional analyses. Once this task is completed, the team will move on to the task of recording and recovering the artifacts from the Stella 1 shipwreck site as described above. During the final part of the excavation season, the team will return to the site of the Roman bridge and continue recording these interesting and varied structures.

The fourth campaign of the Anaxum Project, directed by prof. Massimo Capulli (University of Udine) will end on August 10 and include students from Italian universities (Udine, Firenze, Padova, Sassari, Trieste) and Texas A&M.