The on-deck generator sputters and dies. The computer screens all go black. There is a hanging moment of silence, and then a controlled pandemonium breaks out in the cabin.

One-hundred and eighty meters below, the ROV’s lights blink out and the propellers go silent. Lifeless, it begins to fall through the darkness toward the ship below. 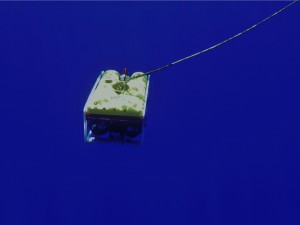 On deck, Ishay is shouting “pull her up, pull her up” in Hebrew. Megan and Leor are coiling the umbilical as quickly as possible. I drop my camera (I had been filming) and run to the swim step. Leor tosses me the cable and yells “pull, pull, pull!” I began hauling it in hand over hand, while Megan and Leor spool the slack as quick as I can drag it in. It is essential to get the ROV to the surface as quickly as possible – it could become entangled with the gun, railing, holes in the hull, and the drapery of lost fishing nets and line. At that depth, it would be either incredibly expensive or nearly impossible to recover the ROV. 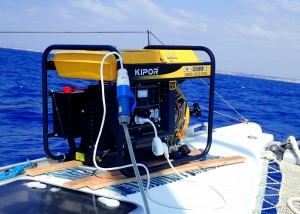 As the ROV struggled in the current, it drew more power than our generator could handle.

The screen flickers as Mike gets the generator started again. The computers reboot, and we can see what the ROV is seeing – a great expanse of featureless blue water. This is good, because we can tell that it is not tangled with the ship. However, we no longer have positional data – no pitch, roll, depth, or heading – i.e., we have no idea where the ROV is, or where it is headed, except that it is somewhere below us hanging on a 100+ meters of cable. We pull on that cable as fast as we can. 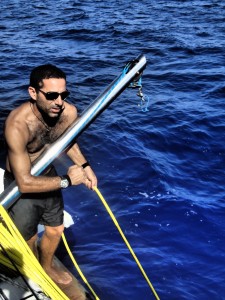 Leor hauls in the umbilical as fast as he can (Photo: Douglas Inglis).

My arms are exhausted by the time we get the ROV back on board. Ishay immediately begins running diagnostics. A reboot restores communications with the ROV, but not all is well. Though we don’t know it at the time, somewhere in the Seaeye’s control station, the PCB circuit board (which integrates the heads-up display) has fried. Nothing Ishay does can restore the heads-up display. Either we can see the orientation data from the ROV, or we can see what it sees, but not both at once. This is the equivalent of barreling through traffic and having your car’s windshield go completely black every time you look at a map, phone, road sign, or your speedometer. With no progress on fixing the problem after 45 minutes, we call it a day. It’s too risky to operate in these conditions. 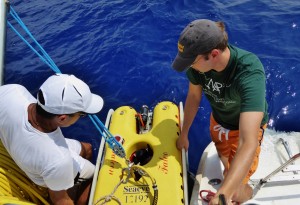 Leor and Doug pull the disabled ROV back aboard Sea King.

The mood on board is strange. The silhouette of the ship has us all excited. What was it? Did we really see a stern-mounted gun, or was it the encrusted boom of a deck crane? However, the ROV’s problems are a major source of consternation – if we can’t get it fixed, our survey project is shot. It could mean costly repairs as well. 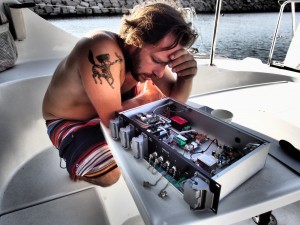 Unfortunately, SeaEye tech support is unable to resolve the problem in our control station, even when they pass us off to one of their engineers – so it comes down to jerry-rigging a solution. Thankfully, Ishay is an electrical engineer. He breaks the control station down, tests the circuit boards, and reroutes a few cables. Working late into the night, he is able to bypass the PCB board and split the SeaEye’s operational data and video stream across multiple screens. It’s not pretty, but it works!

We’re back in business! 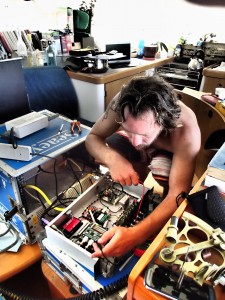