Ocean King returned to dock as the sun departed. While Ishay frantically tried to fix the ROV’s control system, our team of archaeologists started searching for clues to the ship’s identity. We were too absorbed to cook – so dinner was whatever was in the fridge. We sat, glued to our laptops, in the open air cockpit of the Lagoon 410 catamaran. 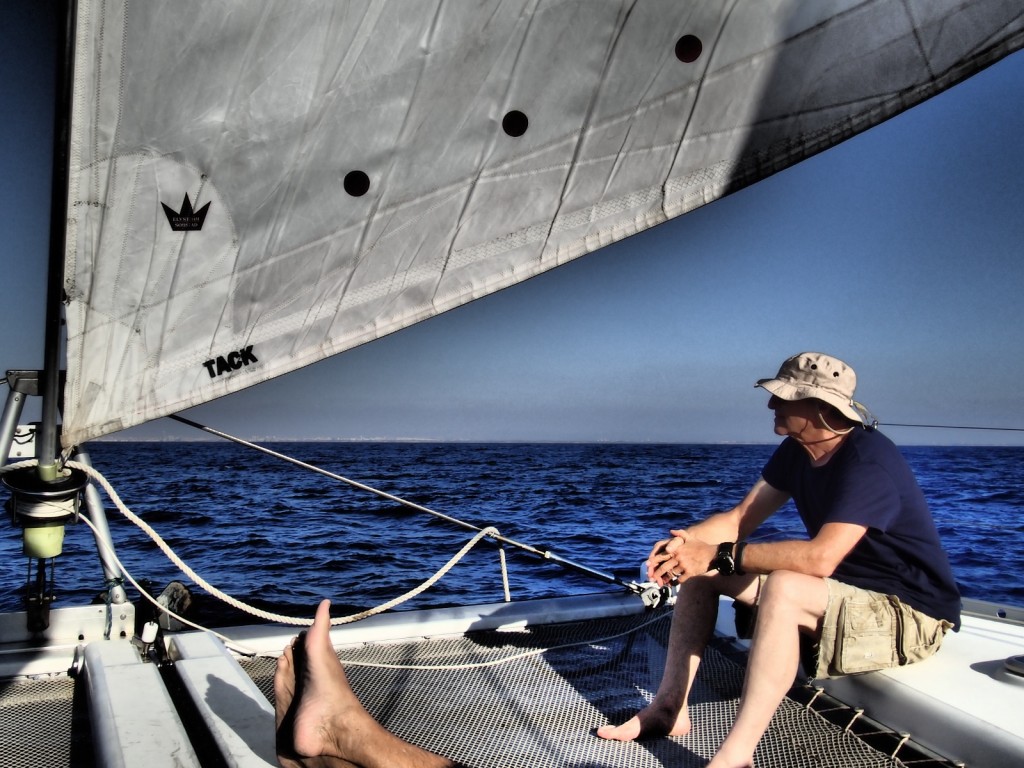 The first task was to narrow down the possibilities. The brief glimpse I had of the ship made me think that the vessel was built in the first third of the 20th century. In the moments before we lost power, we saw a second, possibly asymmetrically positioned gun turret on the starboard side of the vessel, meaning that the ship was definitely a gunboat. This narrowed our search to vessels built for service during WWI, or similarly aged vessels that were subsequently re-purposed and utilized during WWII or the following conflicts in Palestine. 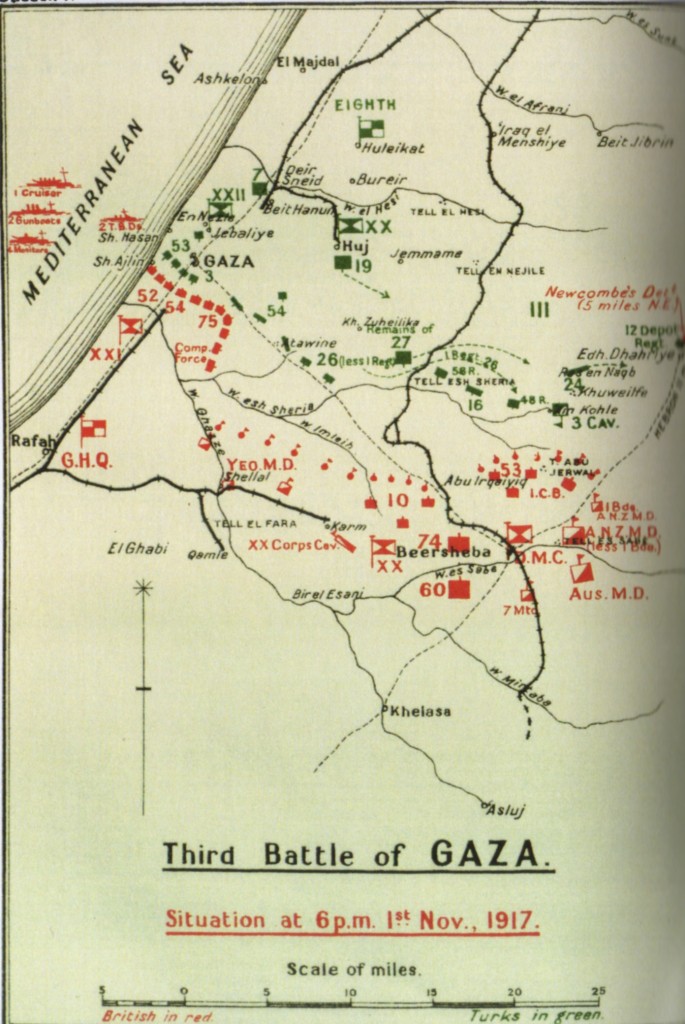 Falls’ 1930 Map of Gaza to Beersheba Line on 1 November 1917, from History of the Great War Based on Official Documents by Direction of the Historical Section of the Committee of Imperial Defence Military Operations Egypt & Palestine from June 1917 to the end of the War, Vol. 2, Pt 1

I pulled up Royal Navy records for British ships lost during WWI off the coast of Palestine, identifying two. Both were lost following the Third Battle for Gaza (November 1st – 2nd, 1917), during the Southern Palestine Offensive. At the beginning of November, forces directed by General Edmund Allenby broke through the defensive line that ran from Gaza to Beersheba, forcing the Yildirim Army Group to withdraw northwards up the coast – bringing the end to a long stalemate between British and Ottoman armies.

The Royal Navy had been relentlessly hammering Ottoman positions along the coast of Palestine. By the second week of November, Allenby’s rapidly advancing army had moved beyond the range of naval support. The shore bombardment vessels anchored within a line of defensive nets used to deter submarines. These precautions were not effective, and on November 11, 1917, the German U-boat U-38 penetrated the defensive perimeter, sinking two vessels, the HMS Staunch and HMS M15.
As I pulled up a blurry newspaper photo of the of the HSM M15, my pulse quickened and I said “Guys, I think I’ve found our ship!” 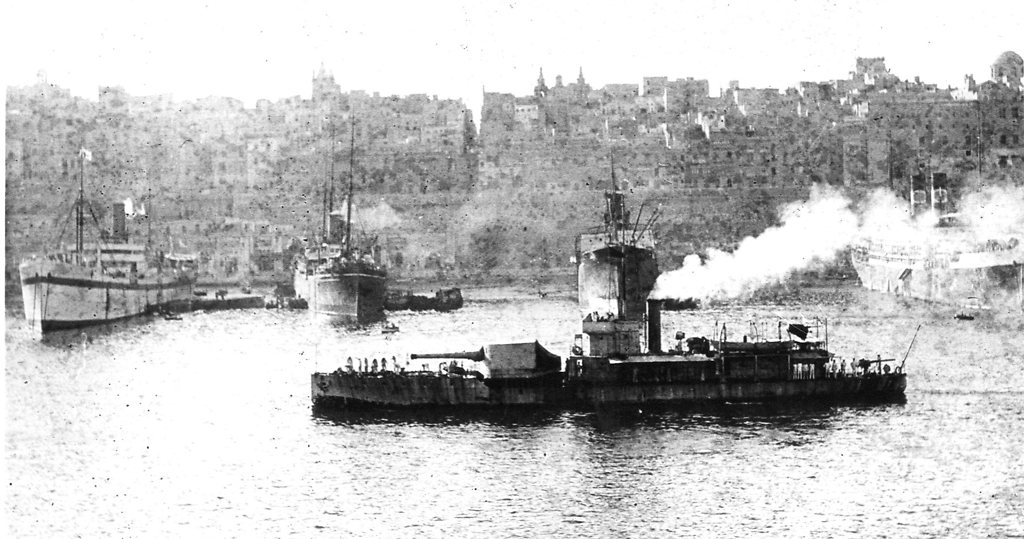 HMS M15 was a Monitor class warship, a type of shallow drafted vessel built for coastal patrol and bombardment. She was 54 meters long with a 2 meter draft. HMS M15 was armed with a foreword mounted 9.2″ Mk X gun for shore bombardment, as well as a 12-pdr. and a 6-pdr. anti-aircraft gun at the stern. As I looked at photos of one of the M15’s sister ships, the stern configuration seemed familiar. At 54 meters long, the HMS M15 was close to the bottom range of Ishay’s 60-80 meter estimate, (made from examining the sonar). Had we really found our ship?

A second ship was lost that day – the HMS Staunch. Could it also be a possibility?

The HMS Staunch was a 750 ton Acorn Class destroyer. Staunch was armed with two 21″ in. torpedo tubes, fore and aft 4 in. guns and two 12 pdrs. mounted on its port and starboard beams, directly behind the bridge. The vessel was 75 meters long, which fit well within Ishay’s estimates of 60 to 80 meters based on the sonar display. The mention of port and starboard-mounted guns intrigued me – we had seen a turret on the starboard side of our wreck. However, our vessel seemed like a smaller ship. Holly did some digging and pulled up historic photos and specs of the ship, confirming our suspicions – the HMS Staunch was nothing like the vessel we had seen 187 meters below the waves.

Cautiously excited, we turned to the SeaEyes’ video recordings to look for more clues. We hadn’t had a clear look at the wreck before the ROV lost power. Megan had just finished processing our additional Go-Pro footage, providing us with a HD look at the vessel. The six of us crammed around her computer, watching as ship came into view. The elliptical stern, railing system, and anti-aircraft gun matched the photos, but the video raised more questions. Despite my enthusiasm, I had nagging doubts over the shape of the rudder and asymmetrical turret which did not match plans of M15 class vessels that I had found online.

The only way to test our hypothesis was to return to the ship.