The aim of this 2012 project is to survey and record the remains of a Roman bridge over the Stella River (ancient Anaxum) and inspect a number of anomalies detected in a survey conducted in 2011 with a team from the University of Trieste. The Stella 1 Shipwreck is a 1st-century A.D. sewn boat, sunk in 5 m of water in the Stella River (Palazzolo dello Stella, UD). With a grant from ProMARE, excavation was begun in 2011.

This ship, built at the beginning of the Roman Imperial Age using archaic techniques, was carrying a cargo of Roman tiles when it sunk, Dressel 2/4 and Lamboglia 2 amphorae, along with iron carpenter’s tools. Different types of stamps appear on several tiles, which may help us identify the ateliers of their production in the area. In 2011 we focused on recording the extant hull structure for the purpose of reconstructing the vessel. This reconstruction will hopefully help us understand the construction technique used on this boat type, as well as the historical context of its loss. 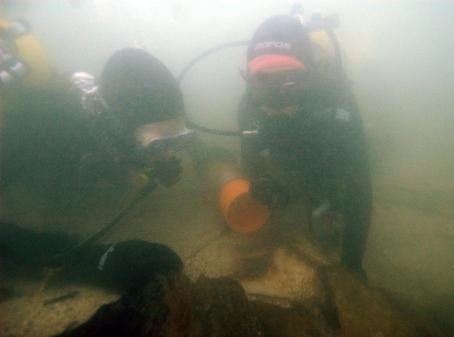 ABOVE: The survey and excavation conducted on the 2011 field season resulted in the creation of a partial reconstruction of the shipwreck. All extant timbers were recorded and a corresponding timber catalog created.