Teams of four Italian divers lived for a week at a time inside a pressurized chamber on the training ship Corsair, and were lowered in this pressurized PTC (personnel transfer capsule) to the wreck, where they could work outside for hours without daily decompression.

In a unique collaboration, the Institute of Nautical Archaeology worked with saturation-diving trainees from Sub Sea Oil Services of Milan (SSOS) to investigate a 3rd century BC shipwreck lying in 60 meters of water.  During the summer of 1977, eleven SSOS trainees spent a total of 157 man-hours excavating the wreck site under INA’s archaeological direction. 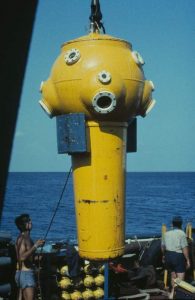 The Capistello shipwreck lies on a very steeply sloping bottom, averaging about 45 degrees, approximately 300 meters off the south-east coast of the island of Lipari and 200 meters from the Capistello reef.  The wreck was first found in the 1960s and a large number of artifacts were looted, although these were all confiscated by Italian authorities in 1967.  After this initial disturbance and illicit removal of over 30 amphoras and hundreds of examples of Campanian A black-glazed pottery, an expedition to survey the site was launched in 1969 by the German Archaeological Institute at Rome.  However, again, in 1971, the site was looted.

In the summer of 1976, SSOS and INA joined together to survey the site.  The project was directed by INA’s first vice-president, Michael Katzev.  As part of a deep-diving training course that would ultimately qualify the students to work at depths of 240 meters, ten SSOS mixed-gas diving trainees spent one 20 minute dive on the shipwreck.  Furthermore, INA archaeologists documented the site with photographs by diving in a pressurized diving bell.  While in saturation, which might typically last a week, divers did not undergo the radical changes in pressure which removed the problem of lengthy decompression stops following dives.  This allowed divers longer time on the seabed.  Rather, a very long decompression is completed at the conclusion of the saturation dive.  During the entire saturation period, the divers breathed a helium-oxygen mix to avoid nitrogen narcosis.  INA and SSOS returned to the site the following year to complete the documentation of the site. 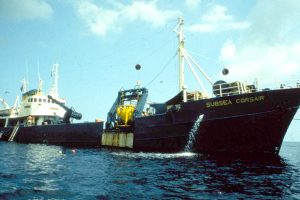 The training ship “Corsair” which was used during the investigation.

As excavations on the site continue, it became increasingly evident that the relatively flat ledge over the wreck site was caused by the cargo of the ship trapping sand flowing down-slope, rather than being the reason for the ship lodging in its present position.  The length of the ship (bow to stern) lied perpendicular to the slope, and was partially propped up by a rock outcrop in antiquity.  A large portion of the hull remained intact, and a portion of the ship’s cargo rolled down the slope.

During the first season, three saturation dives were completed and these ranged from three to nine days.  At the end of each diving period a decompression period of 33 hours was completed by each diver.  The SSOS trainees worked in teams of four, divided into pairs and rotated between morning and afternoon dives, with an average bottom time of two hours per dive.  Continuous communication with the surface was maintained for the duration of all saturation periods, however due to technological constraints, communication was mainly limited to yes/no questions. An SSOS submersible was also employed which had high maneuverability and allowed a close view of the excavation progress, a diving bell was also used.

After the removal of the amphoras, the hull remains were visible by the second season in 1977.  Photographs were taken of the remains, with the use of a purpose built, portable photo tower that allowed time exposures of several seconds with the lens closed on the smallest aperture. A second tower was used for close-up photographs which resulted in teh first view of the mortise-and-tenon joints that held together the hull strakes.  A photomosaic of the site was completed during the third field season.

Sand was removed with hand-fanning and a small airlift.  Excavation was completed after first laying down two 2 x 4 m grid squares.  Amphoras were removed, and the hull’s light frames and planking were exposed.  Six lead Roman anchor stocks and one iron anchor were scattered around the wreck. 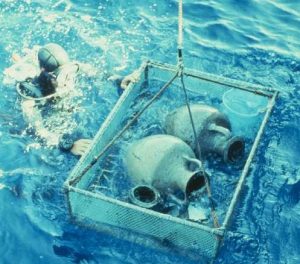 Amphoras being raised from the wreck site.

Over 80 amphoras were recorded on the shipwreck, found in uniform rows of four to six amphoras each with the toes pointing up-slope.  Fifty-two of these intact vessels were raised from the wreck.  These amphora were found to be uniform, all being 0.62 meters tall and 0.36 meters in diameter at the shoulder.  Some of these jars had impressed stamps on both or one of the handles, the shoulder or the body.  Their interiors were all coated in pitch, and likely mean that they were transporting wine.

The cargo also included a significant number of black-glazed pottery identified as pre-Campanian and Campanian A.  This pottery came from two main areas: one towards the bow and one towards the stern. The majority of these pieces belonged to bowls, although sherds of six kylikes, two fishing plates, and portions of two lamps were also found. 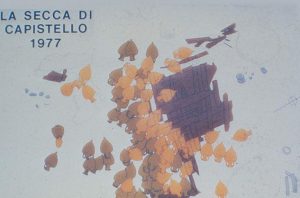 Roughly six square meters of the hull were exposed during the excavation, and it is believed to have continued under the sand and outside of the two excavation grid squares.  The main section was made of eight to ten contiguous strakes, eight frames above them, and three interior planks over the frames.  The frames were relatively large, moulded 10 centimeters and sided 16 centimeters.  The strakes on average were 20 centimeters in width and 4.5 centimeters thick.  The strakes of the hull were joined by pegged mortise-and-tenon fastenings which were widely spaced.  The average mortise was cut 5 centimeters wide and 6 centimeters deep.

The frames were laid in a pattern of floors and futtocks alternating with half-frames, and the half-frames were sometimes made of separate timbers scarfed together.  Frames were attached to strakes using copper nails that were then clenched over the inside of the frames.  The average distance between frames was 15 centimeters.  A large timber ran longitudinally on top of the six frames and likely provided strength to the hull.  The possible remains of ceiling planking were also discovered.

The 1976 and 1977 investigations of the Secca di Capistello Shipwreck added a great deal of information to what was known about the ship and its cargo.  While details of its origin are still unknown, future analysis of wood samples and amphora contents might yet still provide answers.