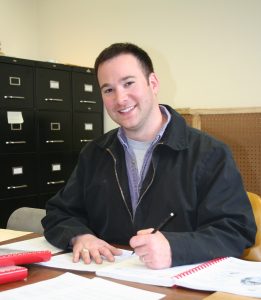 In 2009, the U.S. Army Corps of Engineers (USACE) organized the recovery of wreckage from the Civil War gunboat USS Westfield in advance of a major dredging operation planned for the Texas City Ship Channel in Galveston Bay, Texas. This project resulted in the largest archaeological salvage ever conducted in Texas waters. Over 8,000 artifacts were recovered and sent to the Conservation Research Laboratory (CRL) at Texas A&M University (TAMU). Although conservation was originally the main objective, in time, the project grew into a major exhibit at the Texas City Museum. This project was realized by both undergraduate and graduate students from numerous disciplines working together to achieve a common goal in bringing Westfield‘s story to the public. 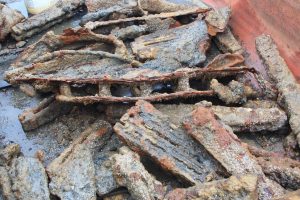 When the Civil War broke out in 1861, the Union Navy sought to blockade all southern ports as a means to strangle the economy of the newly formed Confederacy. However, the Union soon realized that they were ill prepared to fight naval battles in their own backyard, much less establish a blockade. The warships in service were heavy, deep-drafted vessels that could not navigate the shallow bays and twisting rivers of the southern states. This led the Navy to purchase hundreds of shallow-draft civilian vessels, including Westfield, which were converted into warships.

Westfield was originally a New York Staten Island ferryboat, built for Cornelius Vanderbilt. As a ferryboat, the vessel was equipped with an identical bow and stern so it could travel in either direction. This feature allowed Westfield to operate in very confined spaces in New York Harbor. Additionally, Westfield was built to carry heavy loads of passengers and horse teams, a design aspect that was reutilized by the Navy for carrying heavy artillery and other armament.

After aiding Admiral Farragut in the successful capture of New Orleans and participating in numerous operations on the Mississippi River, USS Westfield was made the new flagship for Union efforts along the Texas Gulf Coast. Her mission was to maintain the blockade, and to isolate or capture major port towns. As the largest port in Texas, Galveston was captured by Union forces aboard USS Westfield on October 9th, 1862, and subsequently used as a base of operations to conduct raids up and down the Texas coast. The Union held this city until the Battle of Galveston on January 1, 1863. In the early hours of New Year’s Day, Confederate forces under the command of General John B. Magruder launched a joint land and naval attack on the city. During this battle, Westfield was run aground while trying to cut off enemy steamers. Facing capture, Westfield’s commander, William B. Renshaw, made the difficult choice to destroy the vessel rather than let her fall into enemy hands. After evacuating the crew, Renshaw, his officers, and several other men stayed behind to prepare the vessel for destruction. Unfortunately, something went wrong, and the charges detonated prematurely. A witness described the event:

The decks were saturated with turpentine, and the last of the crew, with Commodore Renshaw, were just about to leave the ship. The gig was ready and the commodore was the last to descend. The torch was applied – a bright flash ran along the deck… It was a moment of surprise and of perfect silence, and it was only a moment; then there was a flash of blue smoke and a fearful explosion. The shells of the magazine, rising in the air, burst far up. There was a plunging noise in the water, such as is occasioned by the falling of a heavy body, and then for a radius of four or five hundred feet there was a shower of fragments which sounded like falling rain. Westfield was seen to part or burst out    forward, like a chestnut burr, and when the smoke was cleared away there was no sign of life about her. Forward she was blown into fragments down to the water; but the machinery had not (yet) been destroyed, as the singing of the steam was distinctly heard   after the explosion. The Commodore’s boat and all in it were annihilated in the terrible catastrophe – scattered through the air in fragments. The smoke-stack and the after part of the ship lay in a black mass in the water for ten minutes, when there was another flash, and she was speedily wrapped in flames”.

The second flash marked the destruction of the boilers exploding under pressure. Westfield‘s stern burned to the waterline and slipped beneath Galveston Bay, leaving the top of the twisted machinery exposed and thirteen men dead. By the end of the battle, Galveston lay in Confederate hands, and the remaining Union ships fled the bay. The loss of both Westfield and Galveston had a long-lasting impact on Union operations in Texas. Galveston remained a Confederate port for the duration of the war and Westfield’s visible wreckage served as a continuous reminder of the Confederate victory over a stronger adversary. 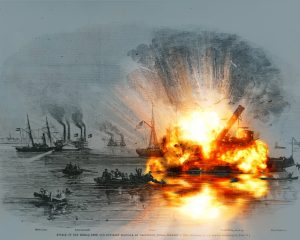 The remains of USS Westfield were located 47 ft below the surface in one of our nation’s busiest shipping lanes; closing down the channel for a scientific excavation was not feasible. Although carefully planned, Westfield‘s recovery was purely a salvage operation that had to be conducted quickly and efficiently in just over one month. The remains of the vessel consisted of little more than a disarticulated debris field (GOOD SPOT TO USE SONAR IMAGE). These artifacts were recovered using a clamshell digger. To help determine provenience, a 15 x 15 ft digital grid was laid over the site remotely using multibeam data to display the 3d surface of the site and an integrated dredge positioning system to provide the operator a real-time view of the grid and clamshell position. After each clamshell grab, archaeologists logged the grid number of the artifacts contained within.

Following the excavation, the artifacts were sent to CRL at TAMU. Conservation lasted approximately five years, after which, a curation problem arose. Like the wreck site, the conserved collection consisted of thousands of disarticulated fragments that would be difficult to present to the general public. This difficultly inevitably turned many museums away. Very little survived that could be developed into a meaningful museum exhibit and it began to look as if most of the collection would be relegated to into permanent storage. 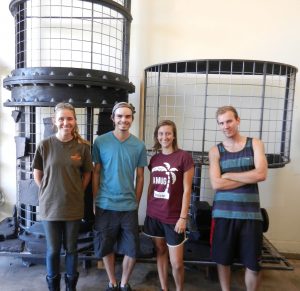 Before conservation was complete, the author, together with fellow Nautical Archaeology Program (NAP) graduate student Jessica Stika, began to work toward a curation solution. Individually, these shattered artifacts meant nothing, yet, if they could be combined and exhibited together, Westfield‘s story could be told. We started to design concept models that utilized skeletal structures to reconstruct the original size of Westfield‘s machinery and began mounting the surviving artifacts onto those structures. Before long we realized that there were enough artifacts to reconstruct Westfield‘s massive engine cylinder, one of the two boilers, and one of the bearing block assemblies that once supported the engine’s walking beam. After presenting concept models of these three components to the Texas City Museum, the idea was accepted, and the USS Westfield Reconstruction Project was formed.

Professional ship modeler Glenn Grieco of the Center for Maritime Archaeology and Conservation (CMAC) took the engine cylinder concept and redesigned it into a structurally sound plan that could support the weight of the heavy cast iron artifacts. Using Grieco’s plan, Dudley May, from the Texas A&M Transportation Institute completed the first skeleton by welding the framing components. The structure was assembled at the CRL, where undergraduate students from both TAMU’s Anthropology Department and TAMU Galveston assisted in determining the final placement of many artifacts.

In their original form, Westfield‘s boilers were very complex with many internal spaces created by the firebox areas, flues, and the encircling water compartments. Because the artifacts were twisted from the explosion, the boiler design required modification throughout the planning process. Recent NAP Ph.D. Kotaro Yamafune recreated the boiler in digital form and NAP alumna Karen Martindale helped the author modify the plan until the bulk of the boiler artifacts were included. To facilitate presentation and interpretation, the boiler exhibit was split down the middle, with one side a full reconstruction, and the other a skeleton showing the surviving artifacts mounted in position.

The Automated Fabrication & Design Laboratory, or “Architecture Ranch” at TAMU’s Department of Architecture trains undergraduate and graduate students who made suggestions about how to build the boiler components in an economically and structurally sound way. Architecture Ranch students reworked the boiler plan to include the vertical stability of the structure, the weight capacity to hold the artifacts, the aesthetic need to hide the main structural frame, electrical lighting, and most importantly, safety, since this structure would be placed in a public museum.

Finally, Architecture Ranch students constructed the skeletal portions of the boiler using cattle-panel and reinforced steel bars and tubing. Although considerably smaller than the other components, the bearing block proved to be no less impressive in both planning and construction. The top portion of the bearing block weighs 765 lbs., while the bottom portion weighs 350 lbs. Without the wood beams that were originally integrated into the structure, students at the CRL were puzzled by how the great weight of this component would be supported. The students from Architecture Ranch found a solution – a heavy frame hidden within faux beams designed to mimic the originals. 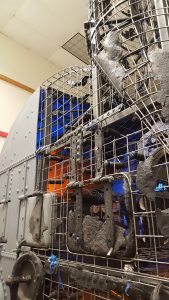 Reconstruction of the boiler before final painting

The process that led to this reconstruction proves that even the most scant archaeological artifacts can be an educational asset if utilized properly. While USS Westfield is only 150 years old, the design of the machinery is now largely forgotten or misunderstood. Collaboration between conservators, museum staff, and students of Anthropology, Architecture, and Engineering generated creative solutions through shared expertise. As a result, large portions of USS Westfield‘s machinery were reconstructed, allowing the vessel’s story to be presented to the general public in one of the largest shipwreck exhibits in the state of Texas.