For more than three decades, INA surveys and excavations in Turkey were supported by Virazon, a 25-meter-long U.S. Army T-Boat built in 1953 for the Korean War and purchased by INA in the 1980s. Refitted with a double-lock recompression chamber, diving compressors, and all necessary equipment for underwater excavation, Virazon was utilized on numerous INA surveys and excavations at Uluburun, Tektaş Burnu, Pabuç Burnu, Kızılburun, and Cape Gelidonya 2010 before her retirement in 2015.

In 2016, INA was given a precious opportunity to design our next research vessel, Virazon II.   Working with naval architects at NAVTEK Marine Technologies in Istanbul, Turkey, INA archaeologist and sailor Orkan Köyağasıoğlu, who comes from a family of boat builders, applied the lessons we had learned over many decades on Virazon to design the world’s first-ever classed Archaeological Research Vessel (ARV).

ARV Virazon II is 24.95 m long, 8.10 m in beam, and built from 70 tons of steel.  She is equipped with a Nitrox blender, 1-ton winch, and 5-ton A-frame for lifting INA’s two-person submersible, Carolyn. The ship is also home to a recompression chamber, high and low-pressure compressors, and can accommodate a full complement of 19 people. The Christening of Virazon II occurred in conjunction with the opening of the 2016 Eurasia Yacht Show in the ViaPort Marina outside of Istanbul. In attendance were INA officers, staff, directors, and numerous friends and supporters.

Virazon II has a tonnage of 170 m3 and a cruising speed of 10 knots, thanks to twin 425 HP engines. The main cabin on the lower deck accommodates 16 individuals, apart from a two-person VIP cabin with en-suite bathroom and shower. The captain’s cabin is adjacent to the wheelhouse and multi-station offices next to the galley on the main deck. The ship also has attachments for side-scan and bottom-scan sonar for remote-sensing surveys. Since her launching in 2016, Virazon II has surveyed in Albania and Turkey, and supported the 2019 excavation team at Kumluca, Turkey. 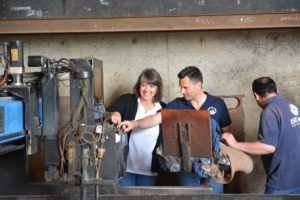 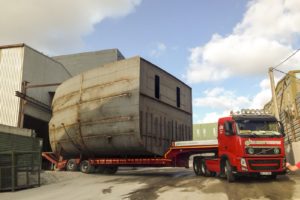 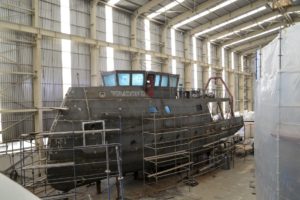 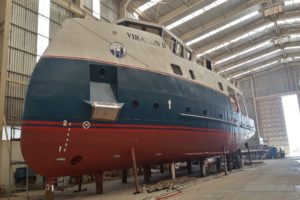 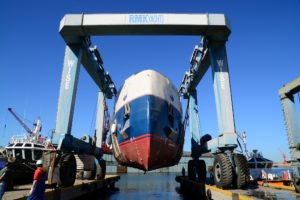 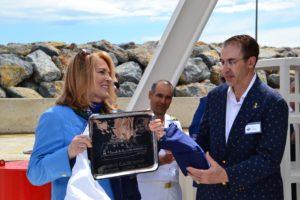 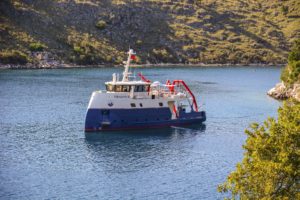 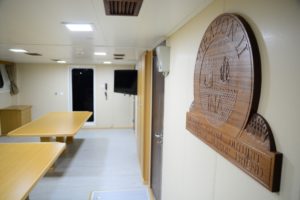 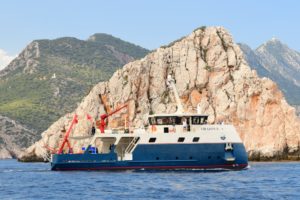