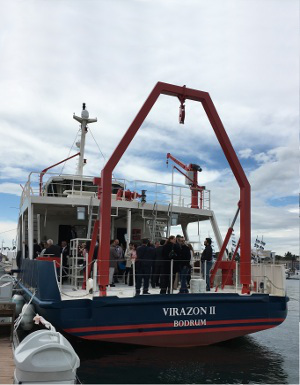 Virazon II, INA’s newest research vessel, was designed by INA archaeologist Orkan Köyağasıoğlu and naval architects at NAVTEK Marine Technologies of Istanbul, Turkey.  The vessel is 24.95 meters in length with a beam of 8.10 meters.  Built from 70 tons of steel, Virazon II also has a 5-ton A-frame for lifting INA’s 2-person submersible, Carolyn.  The ship also houses a recompression chamber, high and low-pressure compressors, and has space to accommodate 19 crew and passengers.  The ship was launched in May of 2016. The Christening of Virazon II took place in conjunction with the opening of the 2016 Eurasia Yacht Show in the ViaPort Marina outside of Istanbul. In attendance were INA officers and members of INA’s Board of Directors, staff of INA’s Bodrum Research Center, and numerous friends and supporters of INA. > Read More

Virazon II has a tonnage of 170 m3 and has a cruising speed of 10 knots, thanks to twin 425 HP engines.  The main cabin on the lower deck accommodates  16 bunk beds with two full bathrooms, and there is also a two-person VIP cabin with an en-suite bathroom and shower.  The captain’s cabin is adjacent to the wheelhouse and multi-station offices next to the galley on the main deck.  The ship also has attachments for side-scan and bottom-scan sonar, which will assist INA researchers during shipwreck surveys. Virazon II is housed in Didim D-Marin. 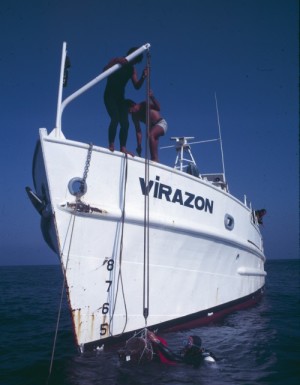 Virazon, or T-502 as she was known to the U.S. Army, is a 20-meter (65-foot) steel-hulled ship constructed in New Orleans in 1953 by Higgins, Inc. as a Korean wartime transport/tug vessel. In 1964 the Navy agreed to transfer Virazon to a young George Bass in order to test equipment in the newly emerging field of underwater archaeology. Her first job was at the Yassıada Byzantine Shipwreck Excavation in 1964, where she was to simply tow the submersible Asherah back and forth to the site. After that she served as a survey vessel. Upon the completion of the 1967 season, Dr. Bass, thinking he was finished with underwater archaeology, arranged for her transfer to an American Air Force base in Izmir, Turkey in 1969.> Read More

On 16 May 1979, Virazon was officially transferred back to INA.  Her berths were remodeled by Oxford University student Mensun Bound and she was outfitted with a double-lock recompression chamber. A darkroom was put in place of one of the bathrooms and an eight-foot drafting table was installed on top of the recompression chamber. Jay Rosloff spent very hot days overhauling everything in the engine room. All necessary diving compressors and equipment were installed, she was repainted, and a deeper keel was added to reduce much of the roll that was common on open water, thus transforming her into a formidable research vessel that would allow annual coastal surveys and excavations. She was immediately returned to archaeological service for the last season of excavation at Serçe Limanı.

Successful surveys from aboard Virazon were conducted in 1981 and 1982, including an exploratory dive to the 14th-century B.C. shipwreck at Uluburun. A more formal survey took place in 1983 and full-scale excavation began in 1984. Since that time, Virazon has been utilized on excavations at Bozburun, Pabuç Burnu, Tektaş Burnu, Kızılburun, as well as the return to Cape Gelidonya for the 50th-anniversary excavation in 2010. Since being retired by INA, Virazon has served as a dive boat for Barakuda Diving School in Bodrum. 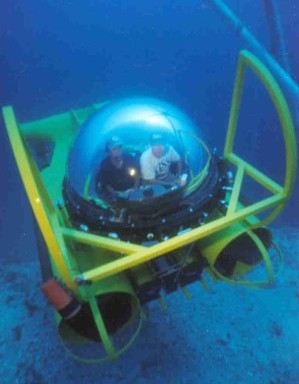 In the early 1990s, after visiting submersible manufacturers in Europe, Asia, and North America looking for a suitable submersible, George Bass came to consider the SEAmagine Hydrospace Corporation of Claremont, California, which was building SEAmobiles for the tourist market. At the time, the SEAmobile dove 50 feet deep, piloted by a scuba-equipped diver on the outside, with two passengers (pilot and observer) inside. INA needed a model capable of diving to at least 150 feet, with controls inside. The company complied and with funding from the Institute for Aegean Prehistory (INSTAP) the result was the two-person submersible Carolyn, named after the wife of Malcolm Wiener, founder of INSTAP.> Read More

Carolyn is essentially a large acrylic sphere attached to pontoons. She is 15 feet long and 8 feet wide and can be transported upon a ramp located between Millawanda’s two pontoons near the stern. When she is ready for use, the pilot and passenger enter the submersible, which is then lowered into the water on the end of the ramp by means of overhead cables connected to Millawanda’s deck winch. Carolyn is retrieved at the end of each dive by reversing the procedure. Thus, occupants never need to enter or exit the submersible while it is afloat, although they could do so if necessary. A wireless communications system allows contact between those in the submersible and those on the catamaran. When a wreck or possible wreck is located, the submersible’s occupants call for divers on Millawanda to descend along the buoy line in order to examine the site more closely.

For added safety, Carolyn is purposefully buoyant. If there is a loss of power, the SEAmobile floats safely to the surface. Other safety features include inflatable soft tanks to increase buoyancy should a battery pod flood, a weight release mechanism for the same purpose, and a closed-circuit re-breathing system that filters carbon dioxide out of the air while replacing it with new oxygen for up to 72 hours. 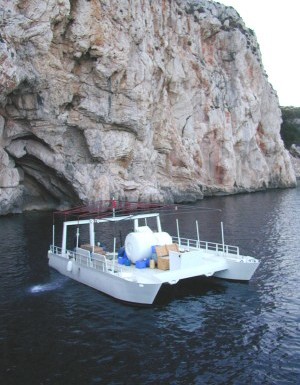 Millawanda, the 45-foot, twin-engine catamaran, shares her name with the Hittite name for the ancient coastal city of Miletus, located close to Bodrum (ancient Halicarnassus). She was designed by naval architect Merih Karabağ, who had participated in INA’s first diving survey in 1973, to transport and tend the submersible Carolyn. Since their joint launchings in 2000 many INA excavations in Turkey have also utilized Millawanda as a diving platform. She is equipped with four low-pressure compressors for operating air-lifts (underwater vacuum cleaners), used to remove sand and substrate from a wreck site, and a high-pressure compressor, used to fill SCUBA tanks on-board while divers continue underwater work.> Read More

Additionally, she has a four-ton winch used to raise and lower the submersible and other heavy objects from the sea. Millawanda was sold in February 2014, and has since been in service in Yalıkavak.