The Remains of the Day

Dr. Sheli Smith and Sean Adams have returned home to Ohio and Vancouver, and I am back in Nelson BC awaiting the arrival of several hundred pounds of field gear from Whitehorse. Sorting and cleaning gear by yourself is perhaps least appetizing phase of any field project, but at least nothing expensive failed or was lost on this trip.
I will try to summarize the accomplishments and observation from a generally successful trip. 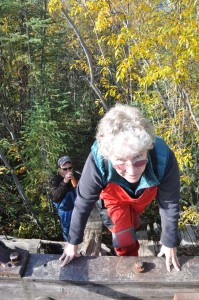 Dr. Sheli scrambles up the stern of Schwatka at West Dawson

Mapping of Schwatka proved more complicated than anticipated due to the irregularities in construction attributed to the multitude of repairs required over her twenty +/ _ years of service on the lower Yukon River. It took several days before we could discern the original chine design. We also had only three mappers (due to an illness) vs. our normal contingent of four. The resultant slower production was offset by Dr. Smith’s expertise, my familiarity with the Yukon hull designs, and the use of Bosch rangefinders and video to capture detail in the more complex sections of the hull. In the end we obtained measurements and drawings for a plan view, five transverse cross-sections, and three longitudinal cross-sections over ten days. Only one section of hull on the port side was inaccessible because of safety issues.
Schwatka did not disappoint. The vessel’s design differed substantially from the many other late 19th century sternwheelers we’ve documented over the course of the Survey. The most notable design variation was a novel turn-of-bilge that would be classified as a standard chine except the builders omitted the longitudinal bilge clamp or bilge keelson. There was extensive use of large transverse timbers (e.g. carriers) to support the boilers and a central line of hog posts (e.g. king posts or braces). These carriers were the largest timbers in the vessel, and were supported by up to nine longitudinal strength members (e.g. stringers or keelsons) that in turn supported two additional lines of hog posts to port and starboard, the engines and cylinder timbers, and deck beams. 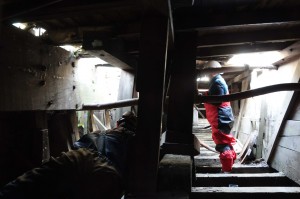 Additionally we documented the single remaining boiler, the mud drum, and the steam drum lying in the remains of a heavily salvaged western rivers style, two-boiler battery. At the stern, a slaved four-tiller system was almost entirely intact, complete with the sweep for the two master tillers, and blocks for the main and monkey rudders.  And at the heavily-constructed bow are the remains of two towing post assemblies. 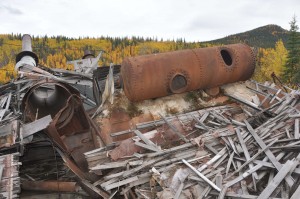 Elsewhere we had less luck. The visibility at Steamboat Slough never improved enough for us to use the drop cameras to investigate several sonar targets in the area where the steamships Mona and Glenora burned in 1901. The Slough had zero vis for the entire duration of the trip. One new hull was located and confirmed as a 120′ barge. Downstream of this barge concentrations of firebrick and salvaged steam pipes were found lying on shore in the vicinity of the 2013 sonar targets, as well as a small cast-iron paddlewheel flange from a vessel estimated to be 10 m in length.

An abundance of evidence suggests the river bottom at Steamboat Slough will be a complex assembly of wrecks associated with the debris and trash discarded from the dozen or more large steamboats that routinely over-wintered at this location. Efficient investigation of this site and its associated sonar targets, will require a window of moderately clear water.  Given the “consistently inconsistent” conditions on the Yukon River, we can only try again based upon the best local advice…..and hope we have a bit more luck.

In summary, it was another productive trip to Dawson.  We managed a thorough assessment of one hull, and yet again additional and complex possibilities have arisen for the future.