Hello from the Yukon Territory, Canada.

Well it’s happening…….we arrived the afternoon of Sept. 7 in Whitehorse and the next day drove 530 km north to Dawson City with a full van-load of groceries and field gear. The road trip was uneventful but spectacular….we encountered a prime 4-5 year old black bear, a golden eagle and deer as we drove thru hundreds of km of uninhabited wilderness and past some magnificent lakes. 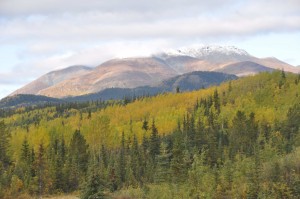 Fall Foliage and Snow on the Peaks

Our base in Dawson is the Whitehouse Cabins – a funky historic group of buildings only 20 minutes from the old shipyard at West Dawson, and run by old friends Doug and Ashley Cotter. We have small kitchenettes, showers, electricity and heat. From the cabins it is a 2 minute drive to the ferry that crosses the swift Yukon River, and then another 3 minute drive to a trailhead. On go the packs and we hike a short distance downstream to reach Schwatka, some 40 m from the river bank. The 44 m 1898 stern wheel steamboat is the innermost vessel in the upstream group of four ships abandoned at the old shipyard……and another three (!) lie downstream in a second cluster. 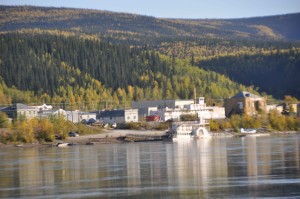 Dawson City and the Yukon River

Day one on Schwatka involved sizing up the job, and numbering frames within the hull. As expected the superstructure has collapsed on top of the hull, and the foredeck has collapsed into the hull as well. Nonetheless the hull is three dimensional from frame 15 to the transom (83), the main deck overhead is intact, and most of the structural components of the hull are in situ. Within the hull headlamps and helmets are a must, and there are five large carriers – large transverse timbers supporting hog posts and the boilers – that you must crawl under.   There are also up to nine longitudinal keelsons and bulkheads that limit travel across the ship, and a complex system of steam pipes, so we spend  a lot of time crawling over and under obstacles.

Over the last three days we’ve been developing a plan view of the hull using a baseline measurement system, aerial (drone) photography at the bow, and hand held video to record construction details. We are roughly 50% finished with the plan view, and intend to complete it by Sunday after which the longitudinal and transverse cross-sections are our next priority.   The job has NOT been as straightforward as previous ships, as Schwatka appears to have been built in a unique and slipshod manner. We have found great variation in chine construction, and there is a general lack of symmetry in the framing. Accordingly every frame has required additional work to document.

It’s been a good start. For an aerial overview of the upstream cluster of hulks, please see our YouTube clip.   http://youtu.be/c8ADO1gNro0 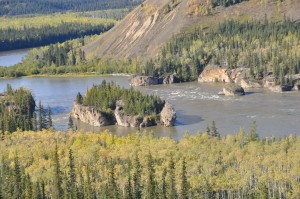 Five Finger Rapids – one of the many dangerous areas on the Yukon River between Whitehorse and the gold fields of Dawson.