Stella 1 shipwreck: start the study of the cargo

The Anaxum Project began as a partnership between the Department of History and Preservation of Cultural Heritage at the University of Udine and the Superintendence for the Archaeological Heritage of Friuli Venezia-Giulia, in a jointly with Texas A&M, the Center for Maritime Archaeology and Conservation, and the Institute of Nautical Archaeology.

The main goal of the project is to reconstruct the history of the area, focusing on the relationship between man and the landscape of the Stella River, the most important waterway in this area of the Friuli plain  (north east of Italy) that provided access to the Mediterranean.

The third campaign of the Anaxum Project, directed by prof. Massimo Capulli (University of Udine) finished on the first days of August.  This year students from Udine and Texas A&M university worked together with students from other universities, such as Universities of Kiel (GER), Padova (ITA) and Pisa (ITA). 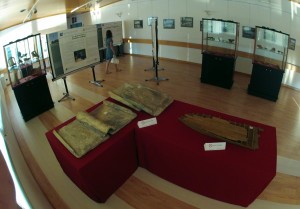 In addition to the setting up of the archaeological exhibit “Sotto Sopra” dedicated to the Anaxum river, this year the Project focused on the Stella 1 Shipwreck artifact dispersion area, which is situated to the north of the hull remains.  The area surveyed is 8 m wide and extends 60 m upstream.  The artifact collection observed and recorded is composed mostly of building materials, such as embrices, tegulae and bricks, similar to those recovered during the 1990s campaign.

The recovery and inventory of the artifacts begun this summer, aiming at understanding if all the finds come from the Stella 1 cargo, and at getting more data pertaining to the size of the boat.  A study of the hull remains, aiming at their reconstruction, is underway at the Universities of Udine and Texas A&M, under the direction of prof. Filipe Castro. 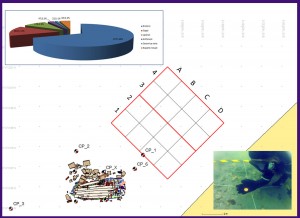 The 2013 campaign lasted 7 weeks.  Alongside with the always time consuming daily work, a considerable amount of time was dedicated to teaching, permitting the students to improve their underwater skills, to understand the excavation planning, and to learn how to use some of the underwater excavation instruments, such as the water dredge.

During this summer 64 square meters of the dispersion area were surveyed and excavated. The recovered materials weigh 1.993,2 kg, in which embrices and bricks represent 78%.  Of the totality of the artifacts recovered, 400 showed significant historical and scientific value (amphorae, terra sigillata, fine pottery, coins, etc.), and will be studied this winter.