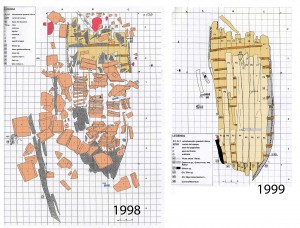 In 2011 we focused on the remains of a small Roman barge, dated to the 1st quarter of the 1st century AD, found in 1981 on the Stella River, at Palazzolo dello Stella, about 600 meters from the Piazza del Porto of the village of Precenicco, Udine.

This vessel was excavated in 1998, during a one-week long campaign carried out by IDRA s.n.c., under the scientific direction of Dott.ssa Serena Vitri from the Soprintendenza per I B.A.A.A.S. del Friuli-Venezia Giulia.  The work was directed by Arch. Giuseppe Franca and Dott.ssa Francesca Bressan.  The cargo was recorded and partially recovered.  In 1999 the archaeologists to recorded the hull remains during a two-week campaign, and covered the hull with geotextile and sediment.  Several publications followed the excavation reports, including a detailed analysis of the cargo.

In 2011, during a period of six weeks, we uncovered the site and recorded the hull in as much detail as possible.