The Rivers of Friuli Venezia Giulia 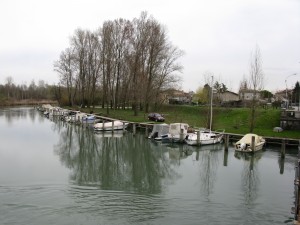 Named Anaxum in Roman times, the Stella River has been inhabited since long.  Archaeological materials dated to 2300 BC have been found on its margins.  It is part of a network of rivers, man-made canals, and lagoons that connected the populations of the southern base of the Alps to the sea.  Its meandering course crosses a complex and varied landscape and connects the mountains to the adjacent coastal plain, the lagoon, and the North Adriatic Sea.   On its path, the River Stella is crossed by the old Via Annia, the Roman road built in the late 2nd century BC to connect Adria to Aquileia.

The story of this river is the story of the Mediterranean worlds described by Fernand Braudel, where people farmed the land and raised animals, shaped and fired the excellent clay of the region into roof tiles or pottery items that are found as far away as Rome or the Roman military camps of Germany, conducted their herds to different pastures according to the seasons, fished, traded, and fought wars with many invaders.

We are interested in the lives of these people and the way they used the Stella River: the works on the margins, the bridges, the docks, and the watercraft.  As Eric Rieth said, these vessels were very different from those designed for long voyages.  They were conceived to sail on a landscape, stop often, load and unload their cargoes, peoples, and ideas along the river and between the mountains and the sea, the villages and the country, the plain and the foot of the mountain.