After installing our Christmas gifts (the dive ladder and tank rank) onto the Puffin, our artic bird* began to have troubles in the tropics. One of our newly installed battle buoys was crushed by water pressure as it was dragged beneath the waves, straining to moor the boat at the bow. When we deployed the anchor in place of this mooring, the hydraulics failed (dousing several of our team members with oil) and we had to leave the anchor on the ocean floor as we could not use the windlass to haul it back onto the boat. Fortunately, our good relationship with the local welder meant that bright and early the next day the issue with the hydraulics was fixed. Furthermore, since the day was calm, even though we had to spend three dive teams recovering the lost anchor and setting up our decompression stop, we were finally able to start laying the perimeter of our archaeological site! 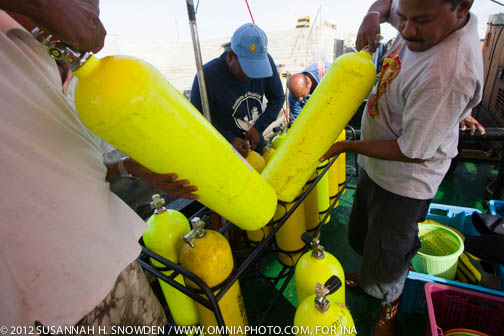 The tank rank is loaded on the Puffin. Photo by Susannah H. Snowden.

This momentary high did not last long as on the very next day, the diesel we had ordered to be delivered at 7 AM that morning wound up being scheduled for 7 PM. After only a few hours delay, we were able to find a small amount of diesel locally to get the ship to site. However, once we arrived at the site, we learned that the captain did not feel comfortable using the anchor to moor the boat and needed us to retrieve the original mooring line that was lost with the first battle buoy. Several dive teams were sent out to find the captain’s lost mooring line, but alas, with no success. Daunted but still hopeful, the team began the next day fresh and eager for a turn of the tide. However, after another boat malfunction spewed diesel fuel over the stern area (including near where we store our oxygen tanks!) and a sudden storm snapped the newly laid moorings and ripped out the decompression stop, it was clear we needed to regroup and rethink the best solution that would insure both safe and productive archaeological diving on this site. Today was spent looking at a multitude of different options – from replacing the Puffin’s anchor to appraising other potentially available boats. 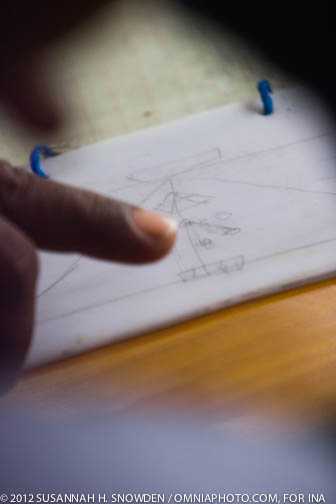 One of the many drawings of possible mooring solutions. Photo by Susannah H. Snowden.

While these details were being ironed out, a small group negotiated with a local hotel for the use of their pool to calibrate the cameras that will be used to map the site. Susannah Snowden, our professional photographer who has worked on five INA excavations, trained me and fellow student Arianna DiMucci, in the second year of her Master’s degree in the Nautical Archaeology Program at TAMU, to take the necessary underwater photographs of a calibration board. With crates full of gear and two scuba tanks, we walked through a wedding reception to reach the pool where we managed to calibrate three cameras! And with a lot of resourcefulness and continued perseverance, our team is still determined to uncover the wreck’s secrets in the two weeks we have remaining. 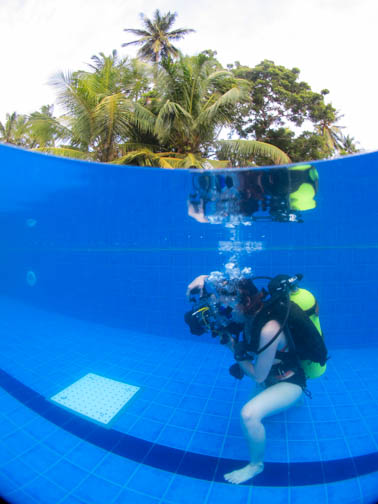 Arianna calibrates one of the cameras in the local hotel pool. Photo by Susannah H. Snowden.

*A “puffin” is an artic bird similar to but at opposite poles from a penguin.