Working under water always presents challenges to the archaeologist accustomed to working on land, the limited time on site being one of the biggest challenges.  While diving Nitrox has allowed us to drastically increase our bottom times (see earlier post), each diver still only gets 47 minutes per day to work in their square if we have good weather.  This requires the underwater archaeologist to work quickly and efficiently while still maintaining good archaeological practice.

Beyond time limitations, the underwater archaeologist also must face unique obstacles dependent upon the sea conditions of individual sites.  For us, excavating in the Indian Ocean, one of these unique obstacles is the constant presence of surge on the seabed.  Trying to excavate in one’s square is often like being submerged in a wave pool at a water park, with the surge moving you several meters back and forth across the bottom.  Sometimes, this can be used to the excavator’s advantage.  While cleaning up a portion of my square, I was able to place a basket several feet away from the open excavation area and use the surge to transport me back and forth between the excavation zone and the basket, picking up rocks and dropping them in with each push and pull.  However, quite regularly the archaeologist needs to remain in one place to work on a specific task or area. There are a few ways to accomplish this in surge – if you are lucky enough to have a large rock in or near your excavation area, you can anchor onto this with one hand and excavate with the other; if you have no anchor, then it is often necessary to find a safe location devoid of artifact debris and anchor with your knees on the seabed so that you can work in one location.  The most important thing, however, is to keep your fins up!  Fins are often the most destructive force on an archaeological site.

At most INA excavations, fins are absolutely banned on site.  Divers typically remove them on their descent and clip them off or store them somewhere near site.  However, the persistent surge on the bottom and often intense currents in the water column and on the surface make the removal of fins on the Godavaya shipwreck site too dangerous; INA has an impeccable safety record that we intend to continue in Sri Lanka! 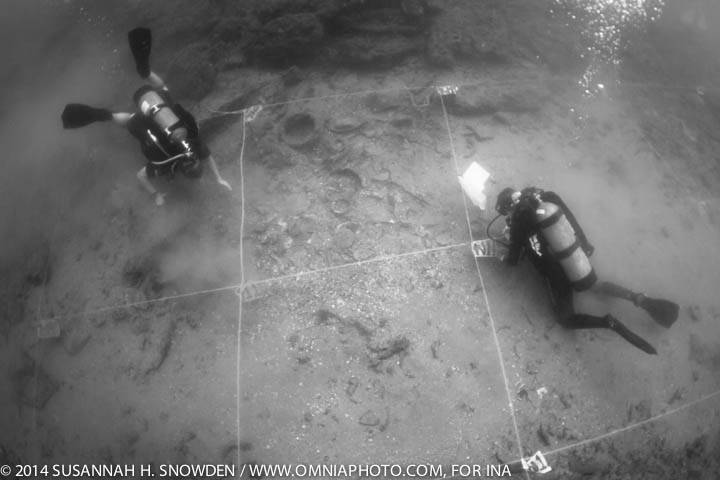 Laura and Staci excavate and sketch in their respective grid squares. Photo by Susannah H. Snowden.

Despite the ups and downs of Mother Nature, we have been able to make steady archaeological progress on site.  Each of the archaeologists on the team has been assigned a specific square of the grid to excavate.  The non-archaeological divers on the team have been trained as our mapping team.  And over the past two weeks, we have removed the surface layer from the excavation grid and started plotting the position of artifacts on the site plan.  In the past week, several more interesting artifacts have come to light after over 2000 years on the seabed.  Two of the more striking finds include a small blue glass disc and a metal (likely bronze) spearhead! 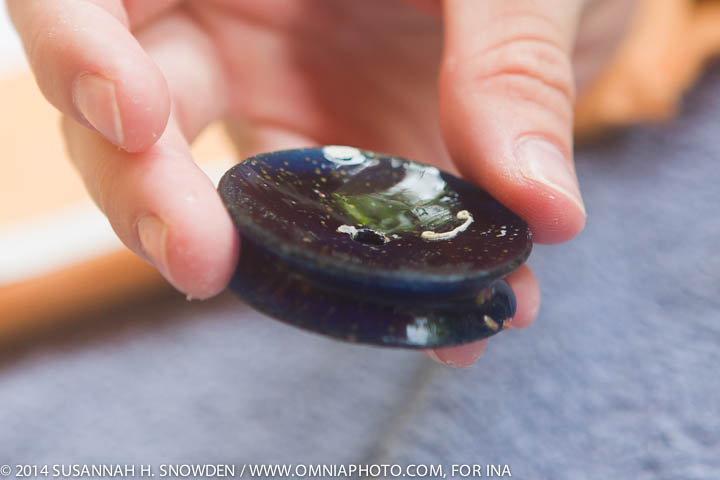 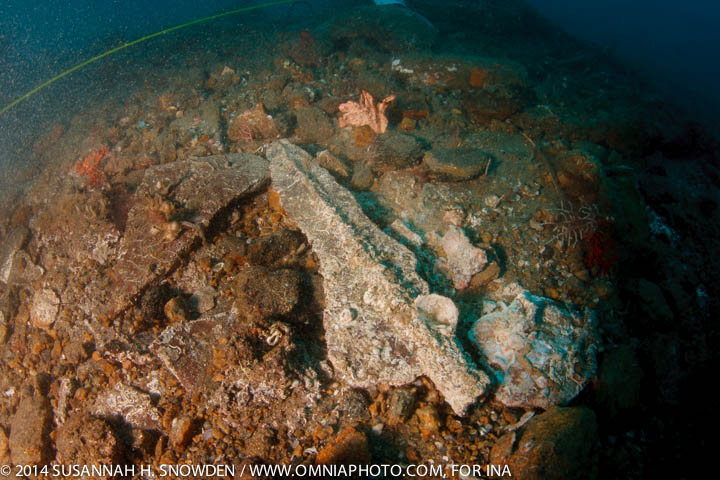 The spearhead found by Palitha. Photo by Susannah H. Snowden.

Refined glass ingots have been recovered previously from the site, but this is our first glass artifact that appears in a finished state.  Weapons aboard ships is of course not uncommon, but the presence of a spearhead will certainly add to our understanding and interpretation of this ancient ship’s purpose and cargo.  Each day on site, as we continue to move sand and pull back layers of time, we uncover a little more about this incredible ship and the trade relationships of the ancient Indian Ocean.