One of the greatest challenges of being an underwater archaeologist is the limited time that one can spend on site. This limitation exists for two reasons: first, practically speaking, there is a limit to how much air a diver can bring with him to site in scuba tanks. Second, breathing air under pressure causes a buildup of dissolved nitrogen in the bloodstream, and if a diver stays at depth too long or ascends too quickly, they are at risk of bringing nitrogen bubbles rapidly out of solution in the tissues of the body, resulting in a dangerous condition called Decompression Sickness (DCS) or “the bends.” To combat DCS on long dives, divers are required to do decompression stops, waiting at specified depths for nitrogen to be released from the bloodstream before ascending. To speed this process, decompression is often conducted on pure oxygen, and indeed, INA pioneered the use of oxygen decompression on archaeological dives.

Last year on site, we experienced tremendous challenges due to both of these limitations! Traditionally speaking, INA uses large tanks or double tanks on deep dives like this to allow for longer bottom times, and also uses oxygen decompression after air dives to allow divers to stay at depth longer and still have short, safe, decompression times. Unfortunately for us here in Sri Lanka, the only tanks available for our use were standard aluminum cylinders with capacities of 80 cubic feet, and the lurching seas and difficulties mooring made it impossible to run the types of surface-supplied oxygen decompression that we always had in the past.

Luckily, the tides have turned this year in our favor, both literally and figuratively! First, this year we brought with us in our shipping container large, 121- and 108- cubic foot diving cylinders that were purchased in Texas. Knowing the difficulties we face with high surface current, we are also filling these cylinders with 32% Enriched Air Nitrox, and running a dive schedule that allows us longer dives with short nitrox decompression stops. 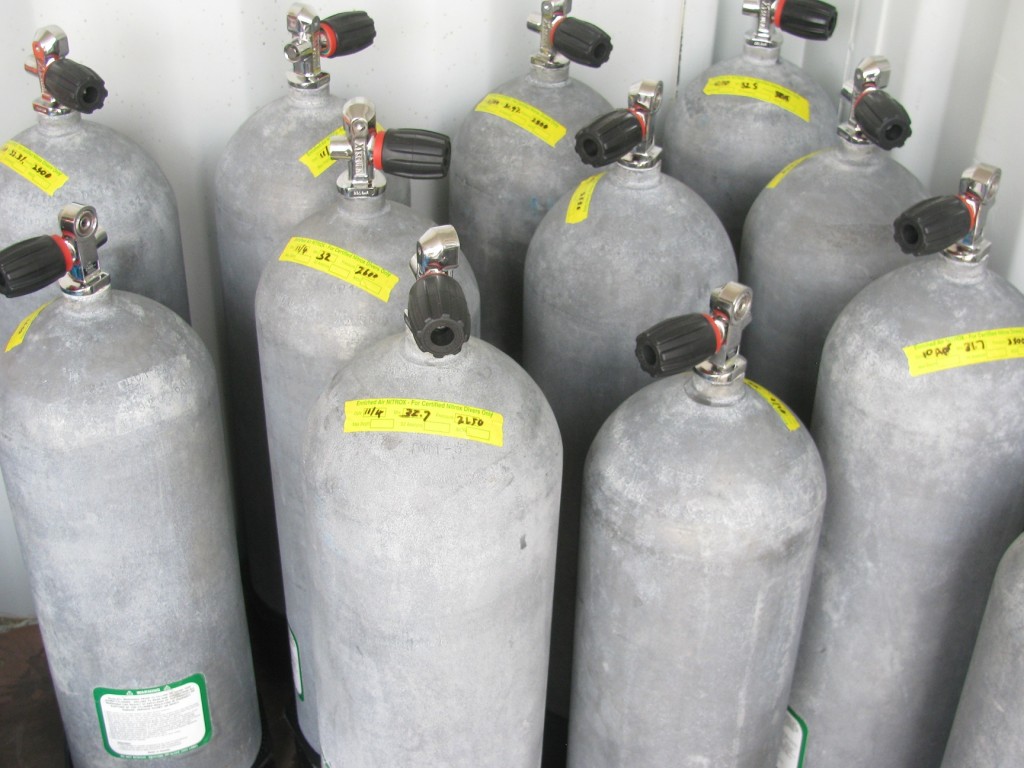 Enriched Air Nitrox is a breathing gas that is composed of the same components as normal air, but with a higher percentage of oxygen than normal air. In this case, our breathing mixture contains 32% of oxygen, rather than the standard 21% (more or less) found in atmospheric air. The increased oxygen in the mix means that we are able to stay on the bottom longer with less risk of DCS! Enriched Air Nitrox has been used for decades as a safe breathing gas to be used at moderate depths: it increases bottom time, decreases surface intervals, and generally allows divers to feel more energetic and fit after a dive. 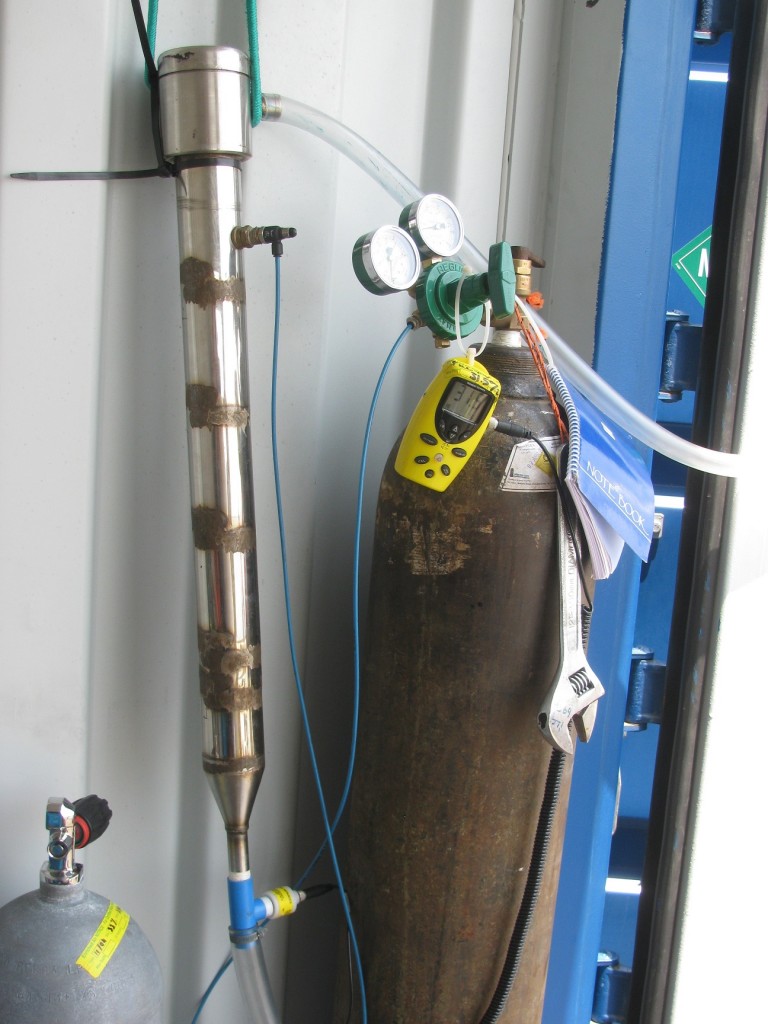 Our humble, (but effective!) continuous blending system for making Nitrox. An air intake (clear hose) and oxygen intake (thin blue hose leading from the O2 cylinder) attach to the top of a “Nitrox Stick,” a steel tube fitted with filters and with baffles throughout its length to mix the two gasses. At the bottom of the Nitrox Stick, an oxygen analyzer is attached, which reads the percentage of oxygen in the mixture before the gas it goes to the compressor and is put into tanks via the clear tube at bottom. Photo by Laura White.

Of course, the use of Nitrox is not without its risks: breathing oxygen at high concentrations at depth can cause a dangerous and deadly condition called oxygen toxicity. As one goes deeper and deeper, the concentration of oxygen can be safely inspired decreases: for example, pure oxygen is not recommended to be inspired deeper than about 25 feet, 36% oxygen mixtures are recommended to be used only until 95 feet, and 32% oxygen mixtures, like the one we are breathing now, are only recommended to be used as deep as 110 feet. 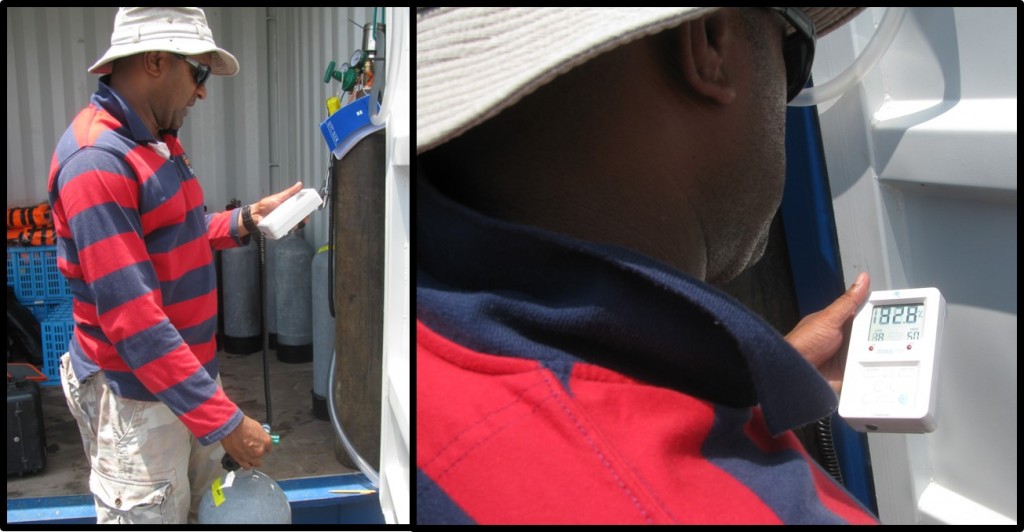 Amalka checks the percentage of oxygen in a tank. Photo by Laura White.

This means that here on site, we must be very careful to be certain of the air that we breathe!  As such, we have set up a meticulous set of procedures for filling, checking, marking, recording, and re-checking tanks, so that each diver knows exactly the percentage of oxygen that is in their tank. All members of the team are well-versed in these procedures. We are using a continuous blending system for the creation of Nitrox breathing gas that was kindly loaned by  Buddhi De Silva, the managing director of  local commercial diving company, DeepSea Commercial Ltd.

Kalpa labels a tank immediately after filling. Each tank will also be analyzed by the diver who will use it every time it is filled. Photo by Laura White

All of this extra effort means that our morning dives, only 15 or 18 minutes last year, have been extended to a generous 27 minutes, with a 6 minute decompression. Furthermore We are also getting the opportunity to dive in the afternoon this year, for an additional 20 minutes, largely because we can dive in more marginal conditions without having to worry about the deploying the surface supplied oxygen decompression system in threatening seas.

Our increases in productivity as a result of these two changes has been staggering, and we have been inspired to see how Nitrox can be deployed effectively not only on this site in the future, but also on other INA pursuits!