Our days in Sri Lanka flow by in a rhythm to which we are all now accustomed. Much gas has been compressed and pumped under the tropical sun. The diving cylinders are now all full of nitrox, an alchemy of welding oxygen and sea breeze, and ready to don. The large air bank cylinders for the recompression chamber are finally filled and re-plumbed into place. Each of the ten took 45 minutes to fill, and keeping them cool during the process involved chasing the sliver of shade around the freight container as the day progressed, switching tanks midway through filling to allow for cooling time, and sponging them down regularly with buckets of water from the taps on the pier. The oxygen cylinders for the recompression chamber have returned full from Colombo, so they are ready to be plumbed back in as well. 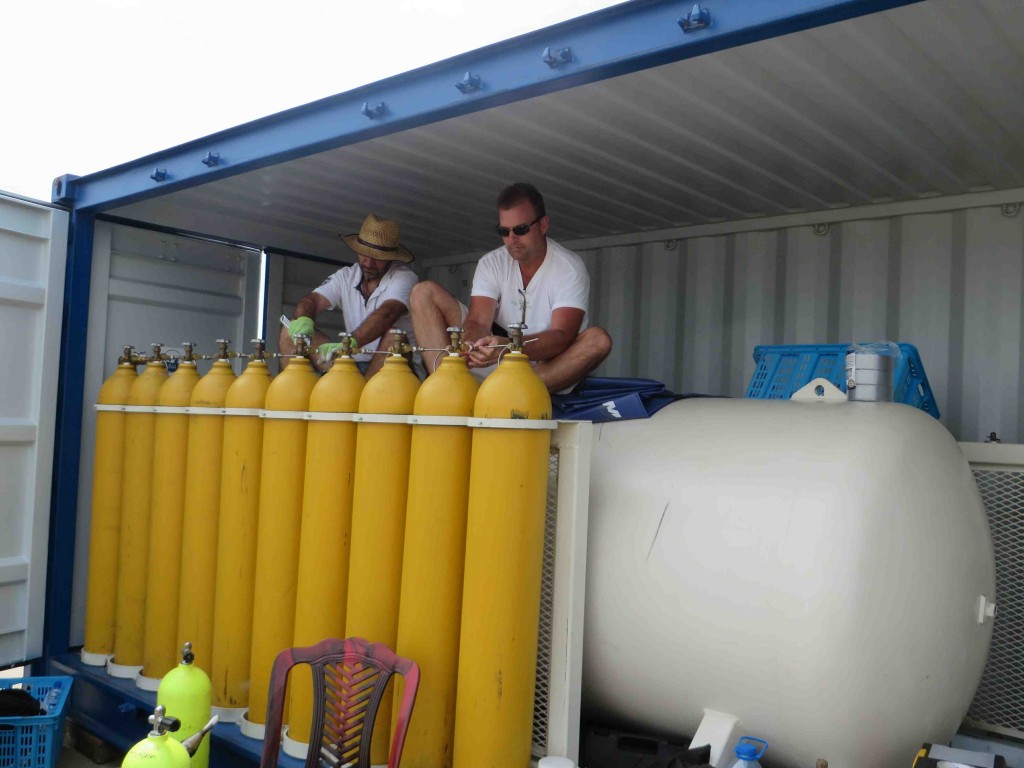 Zafer and Ken plumb the freshly-filled air bank to the recompression chamber. Photo by Laura White.

This morning we broke out of their cartons, assembled and inflated the two small boats as well, so there is little left to be done before the ship arrives. We will need to mount and fill the outboards, and pressure test the chamber, and we will pretty much be ready to go. Our Sri Lankan archaeological colleagues should be here in a few days, just in time for our work on the seabed to commence. 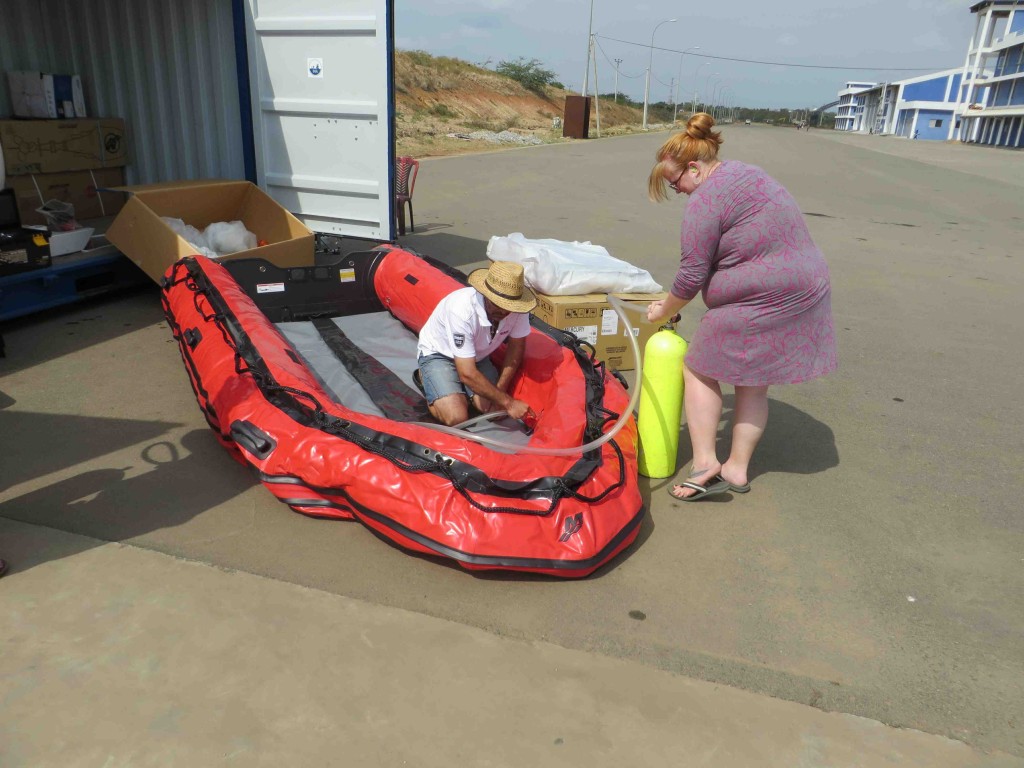 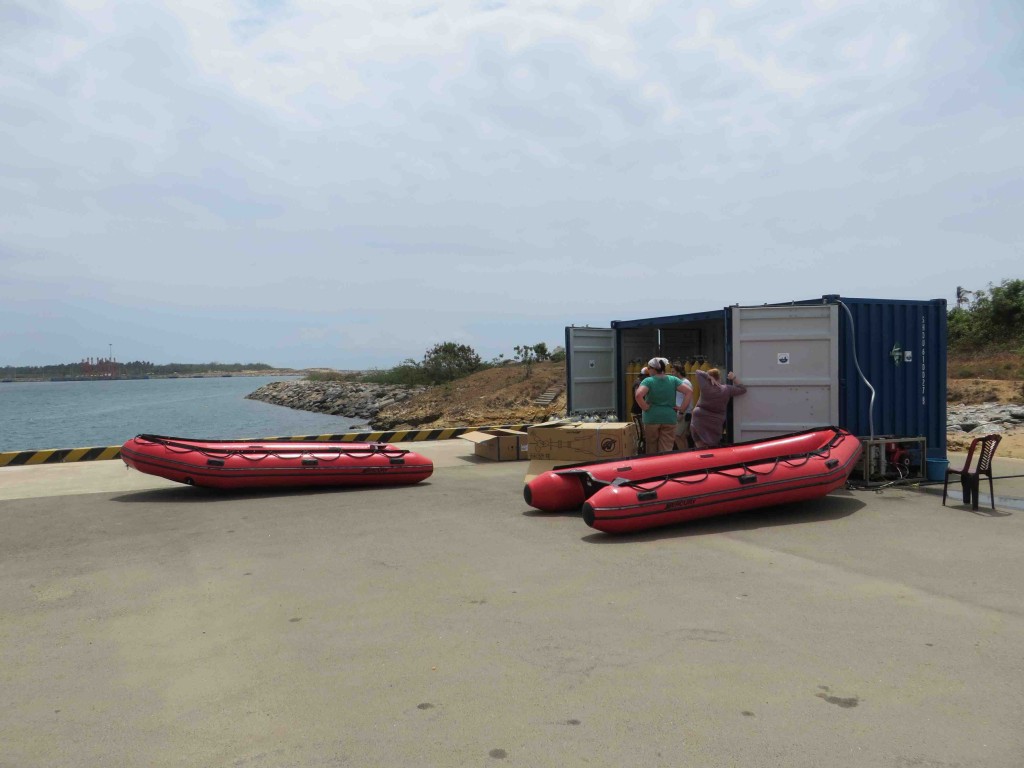 A step closer to the water! Photo by Ken Trethewey.

But never fear, kind reader, we have not been slaving away without taking any time for fun. Yesterday afternoon, in fact, we broke tank-filling off early and embarked on our annual Walawa River sunset cruise. It is an amazing experience for those of us who have done it before, and mind-blowing for first-timers. The embarcation point at the mouth of the river is a short walk from the house, which is great, convenient, etc., and then the realization sinks in, that all this…nature…is literally right outside our back door.  It’s a bit disconcerting, really.

The first eye-popping experience is a colony of massive fruit bats filling every branch of several large trees towering in a group above the muddy river. Strange fruit, indeed. There are hundreds of bats, all hanging upside down by tiny feet, wings folded neatly. Occasionally, one or two take flight, and we see the large leathery wings, the classic batwing shape, the weird, jerky non-avian flight of these flying foxes. At sunset they will leave this roost to hunt, but for now they hang like furry Christmas tree ornaments. 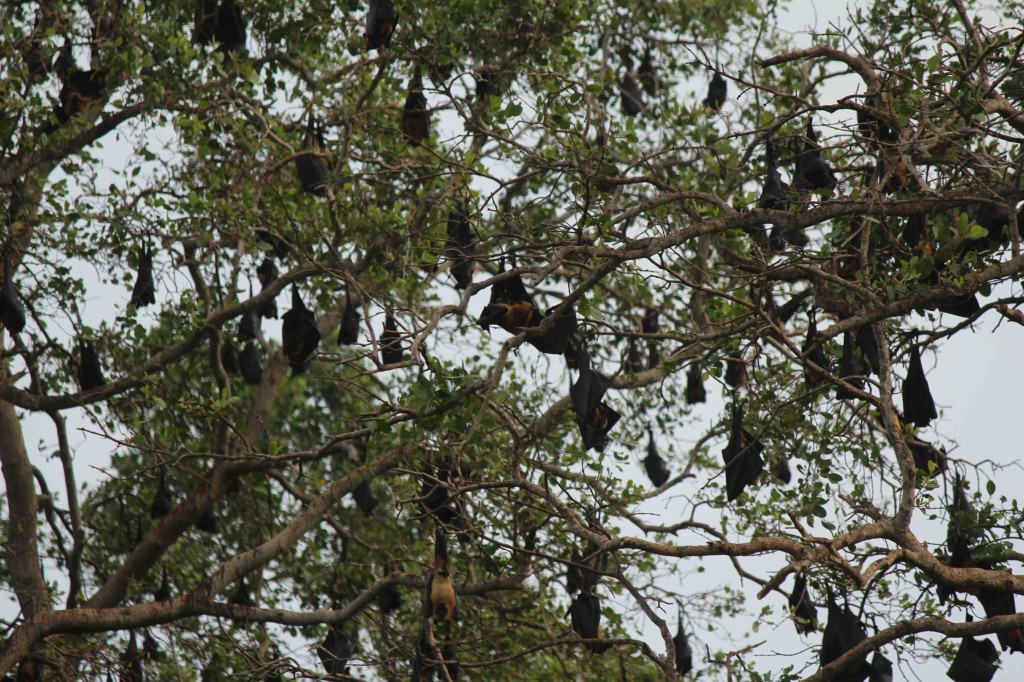 A few of the hundreds of bats in a grove of trees by the Walawa River. Photo by Karen Martindale.

Winding farther up the river, the trees crowd the banks, draped in solid, smothering vines. Lily pads, reeds, and mangrove knees line the river’s edges, so that there is an unbroken wall of vegetation from the water to the tree tops. Dozens of types of wading and diving birds strut, swim and flit all around us. 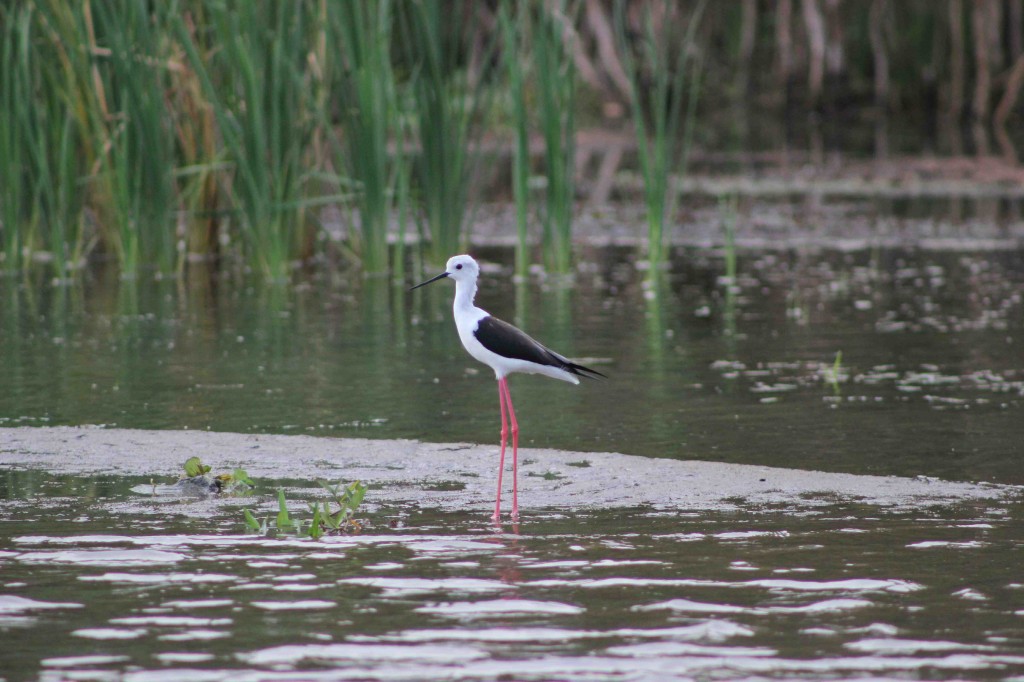 One of many different aquatic birds along the Walawa River. Photo by Arianna DiMucci.

Clans of monkeys stare down from the trees and then hurl themselves airborne from tree to tree to escape us, sometimes falling 20 feet before catching hold again and scrambling on. 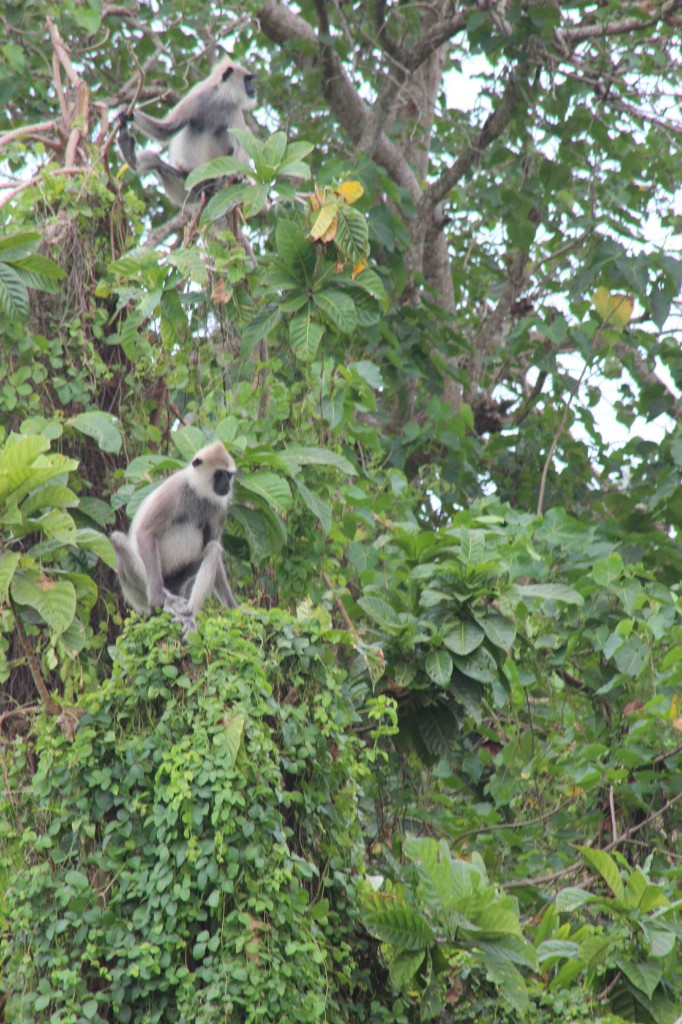 Monkeys are common along the Walawa River. Photo by Arianna DiMucci.

Peahens perch on vine-covered branches and pose for portraits, while the peacocks call their wierd calls, fly across the river ahead of us trailing their gaudy plumage, or sit staring from a limb as we motor slowly by. 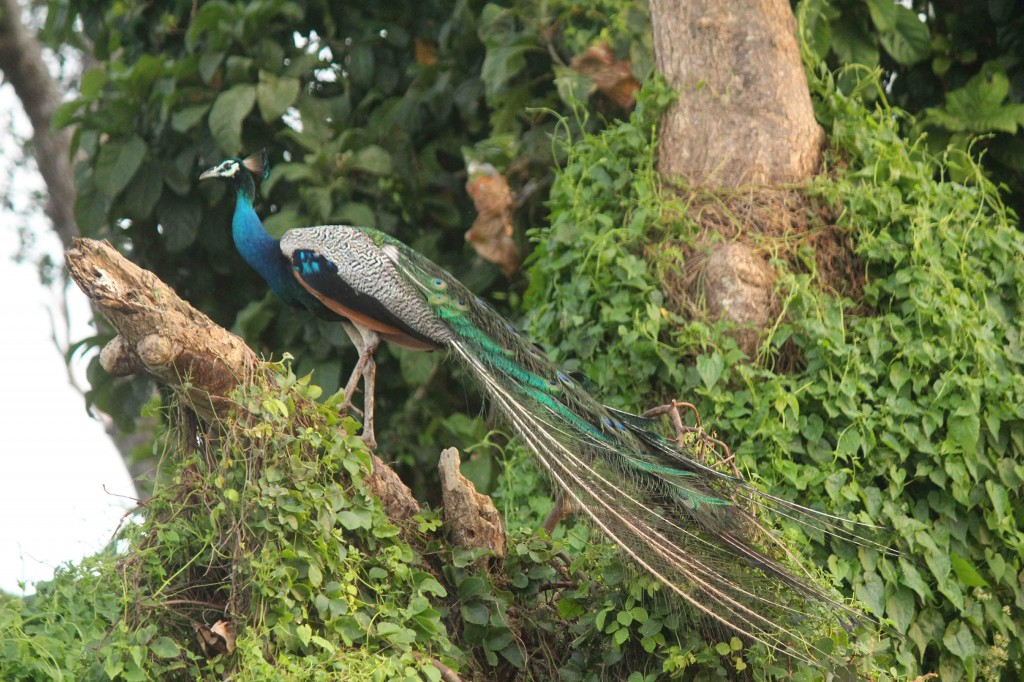 One of the many gaudy gentlemen along the river. Photo by Karen Martindale.

Eagles circle overhead, and a large owl stares at us and doesn’t move from his branch, even when we motor back to take a closer look. 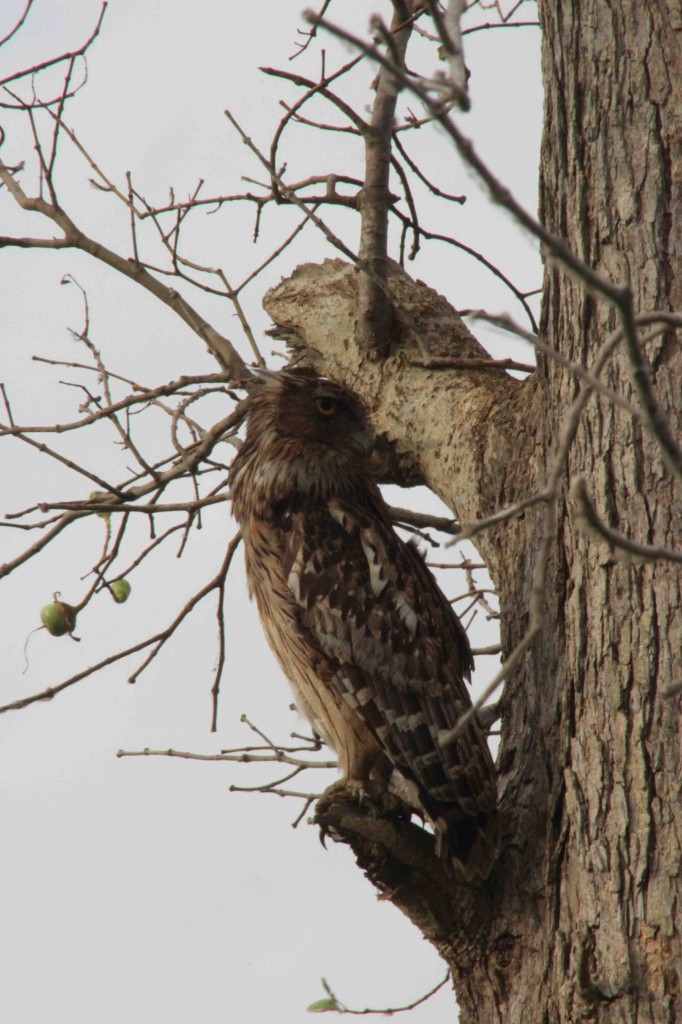 This owl was pointedly not as interested in us as we were in him. Photo by Arianna DiMucci.

The amount of wildlife in this small area is astounding, the river providing the basis for an extensive ecosystem. We also see a large snake crawling into a hollow tree stump, water buffalo staring at us very directly, as if to tell us to get off their river, and a large river fish that nearly jumps into the boat. 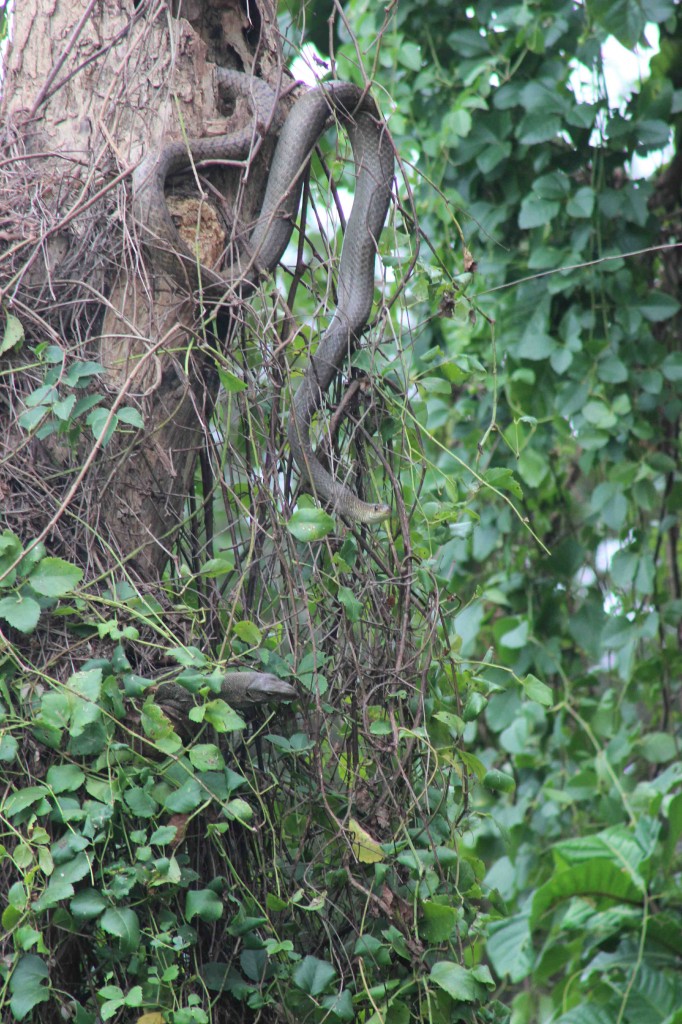 This large snake caused some alarm among our group, though no names will be mentioned. Photo by Arianna DiMucci.

At the distal end of the cruise, the river winds back to the coast, and we disembark for a stroll on the beach, where large, booming waves curl and crash onto piled up purple sand. Fishermen’s straw huts and painted outriggers add to the picturesque scene. There is no one besides us, a few fishermen, and their dogs on the massive beach in either direction. The sea is green and rolling, the sand a mixture of yellow and purple, though mostly purple, and then there is the inevitable solid wall of palms backing the beach, for as far as one can see. 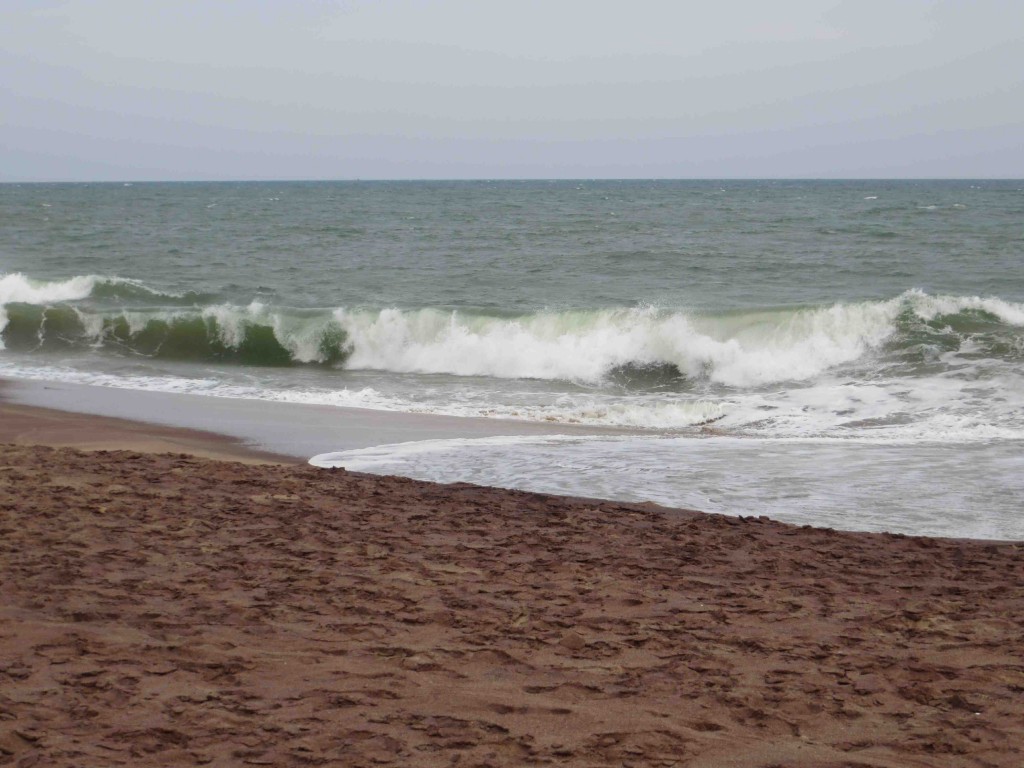 The trip back at sunset, impossibly, features still more wildlife. The peacocks are thick along the water’s edge at dusk, and a couple of eagles have stopped their circling and settled on perches for portraits. There seem to be more monkeys lower in the trees or on the occasional rocks, including one sharing a boulder with a peacock. 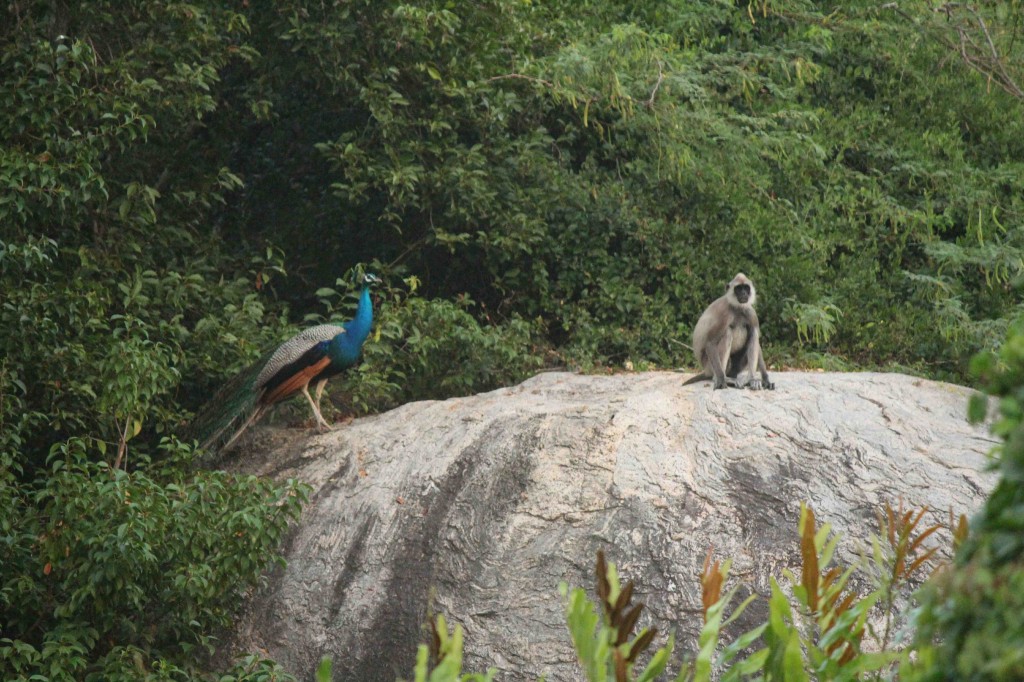 At this point the abundance of wildlife was getting a little ridiculous. Photo by Karen Martindale.

Our cameras were going off continually until we lost the light. It’s fortunate that the film days are over, or maybe unfortunate, as most had hundreds of shots to pick through and pare down after the trip was over.  Such an amazing abundance of striking life, so close to our Sri Lankan home! 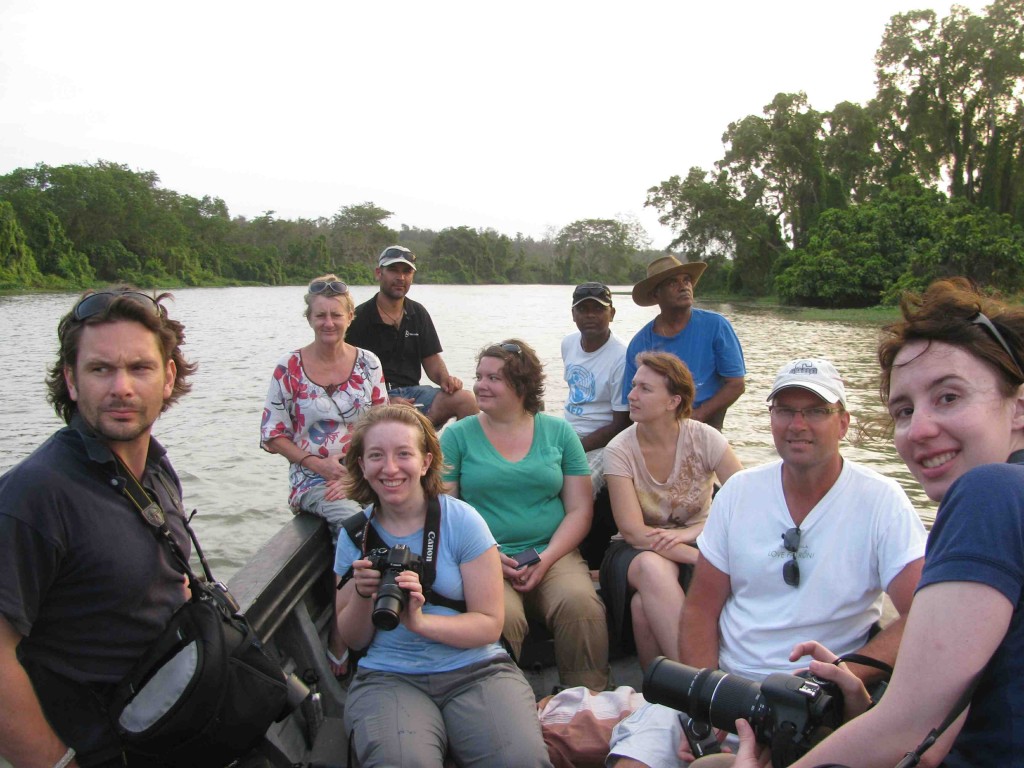 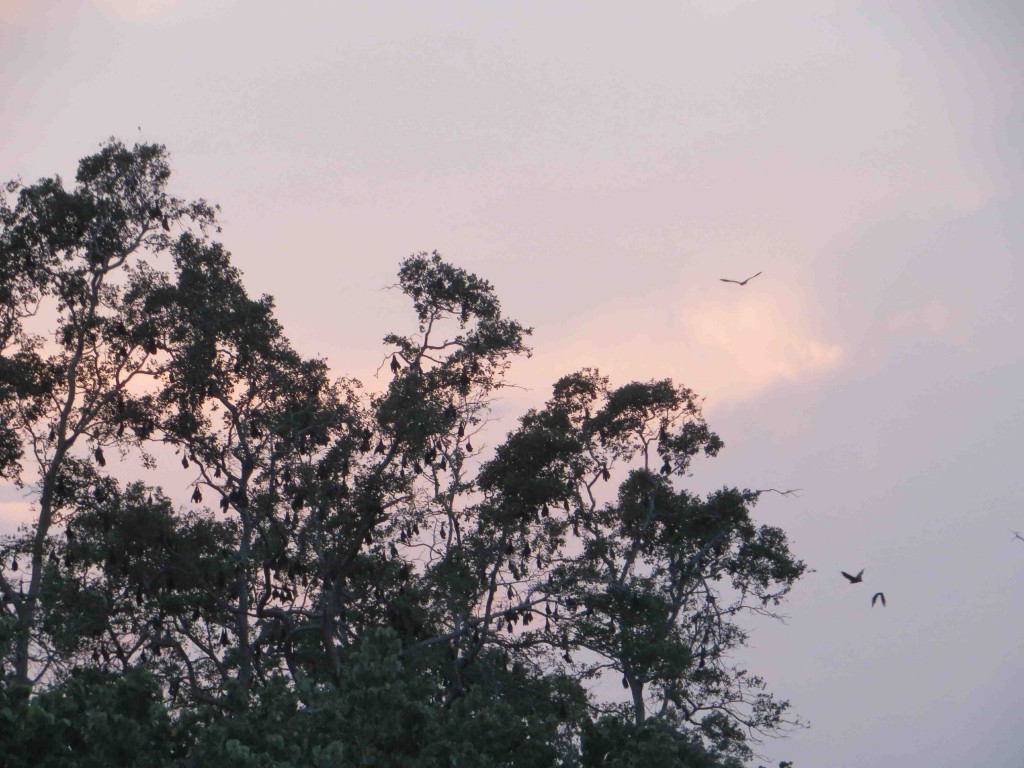