The Container Comes to Hambantota

The container has cleared customs and made the journey south, arriving early this morning at Hambantota port!  After a long day yesterday in Colombo, Orkan was finally able to send the container on its way at 11:30pm.  With just a few hours of sleep, Orkan and freshly arrived INA director Ken Trethewey, a veteran of the Godavaya project, made the drive themselves, hard on the heels of the container. 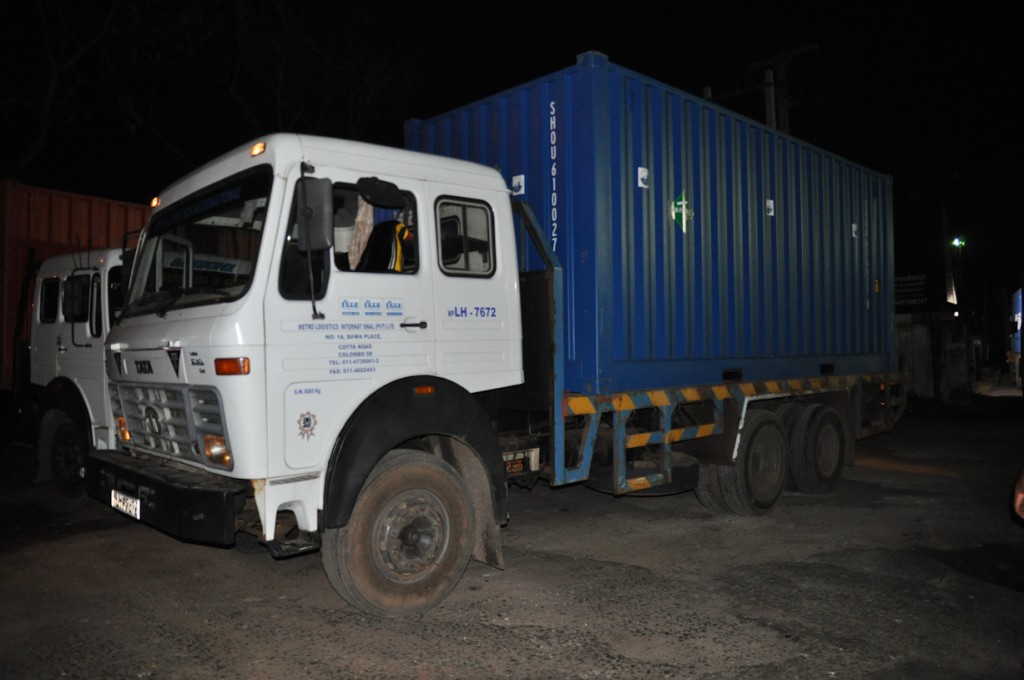 The container, loaded on a truck, leaves Colombo at almost midnight. Photo by Orkan Köyaĝasıoĝlu.

A small welcoming committee was formed to meet the truck bearing our container at the port, oversee the situating of it on the dock, and start the unloading process.  After over two weeks of waiting for the container, there was no shortage of volunteers, and those of us that hopped in the van were like giddy children on Christmas morning, eager to unwrap the presents confined inside the container.  It took several hours to obtain the proper permissions for the team and the container to enter the port.  And then there was some discussion of where along the dock the container could be placed and how we wanted it oriented. 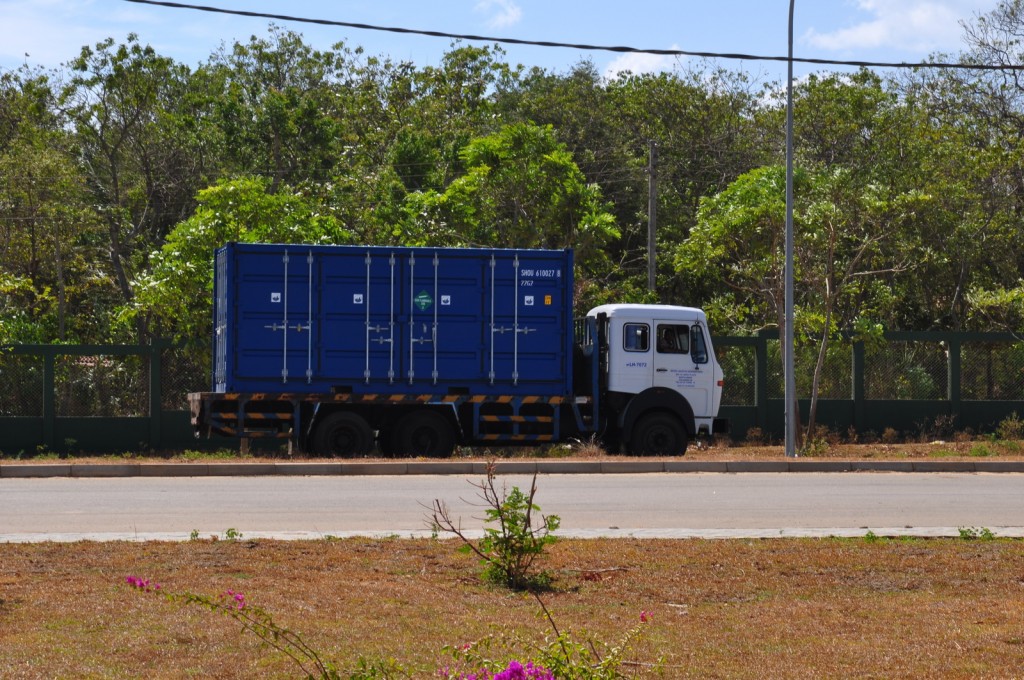 The container arrives at the port in Hambantota. Photo by Orkan Köyaĝasıoĝlu. 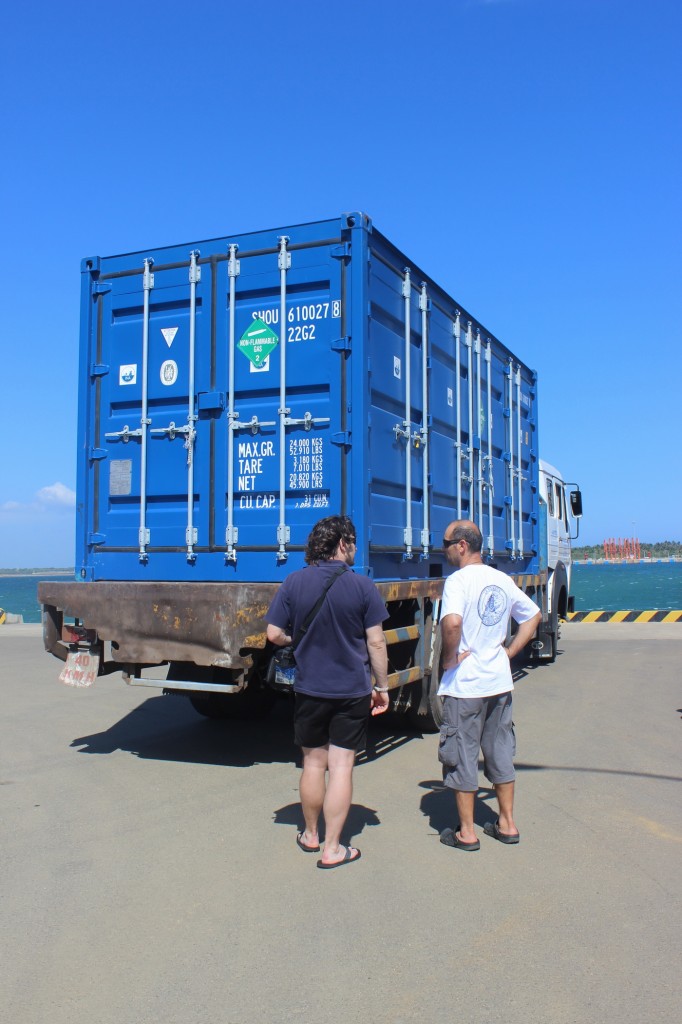 Orkan and Zafer discuss the best location for the container near the dock. Photo by Arianna DiMucci.

Finally, with permits in hand and a prime location selected, the welcoming committee had front row seats to a most unusual spectacle… a dance of fork lifts! 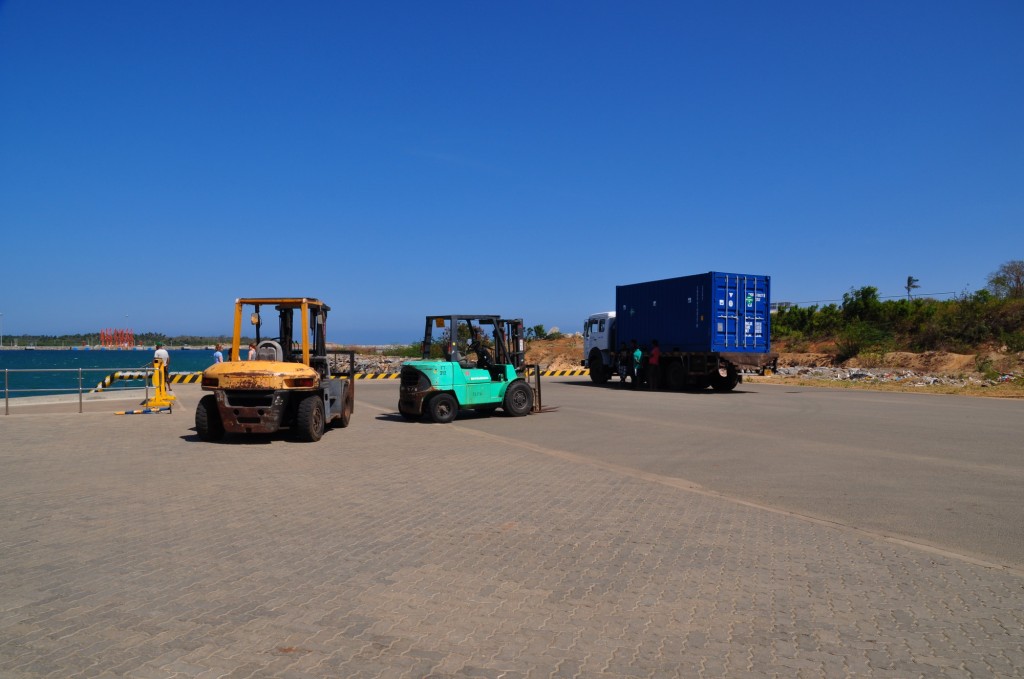 In my limited experience with shipping containers, I have only ever seen them moved via large cranes.  So when two regular sized fork lifts sauntered their way toward our container, I was skeptical at best that they would prove equal to the task.  Without knowledge of my trepidation, the fork lift drivers “got loose” so to say, spinning donuts and interlocking lifts, in a whirling dervish style dance of heavy machinery.  Soon these two romping fork lifts were augmented by a third, more substantial one of their kind.  We all breathed a little easier as this larger lift lumbered onto the scene.  What followed next is perhaps best seen rather than read, and so follow along as I guide you through the experience of watching the container being unloaded in Hambantota: 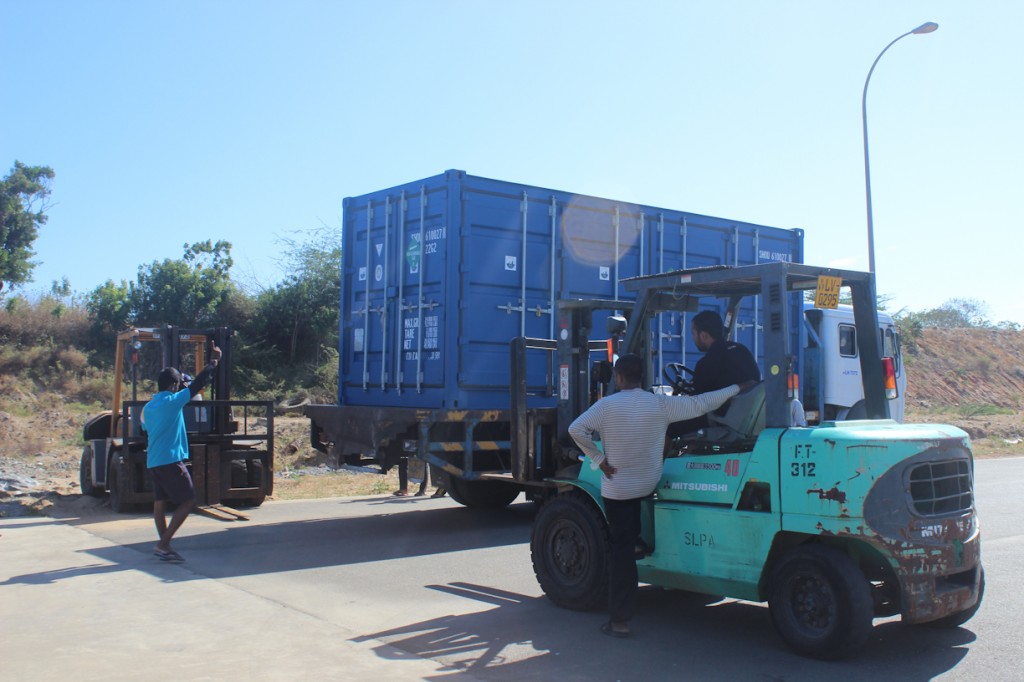 The lifts get into position. Photo by Arianna DiMucci. 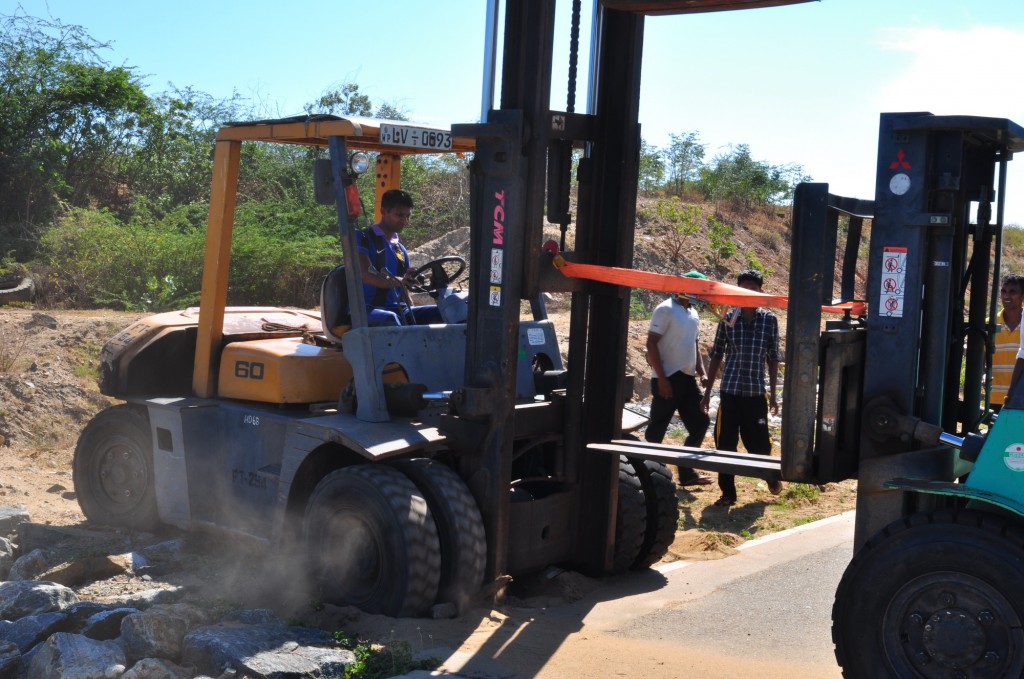 One of the lifts gets stuck in the sand and must be towed out. Photo by Staci Willis. 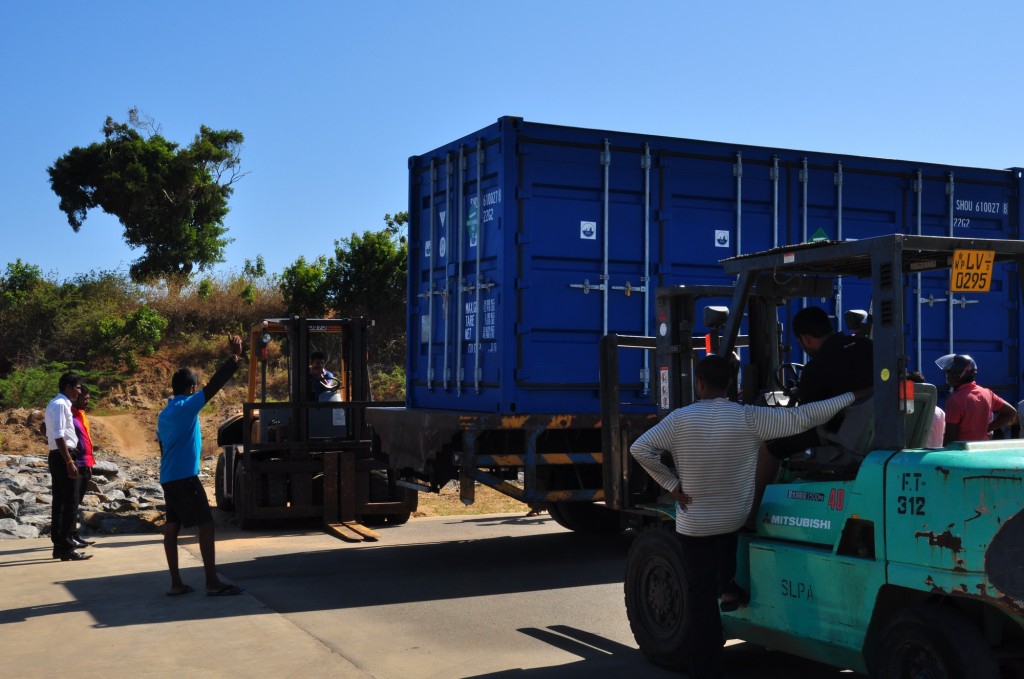 The truck backs up so that the container is over our selected location. Photo by Arianna DiMucci. 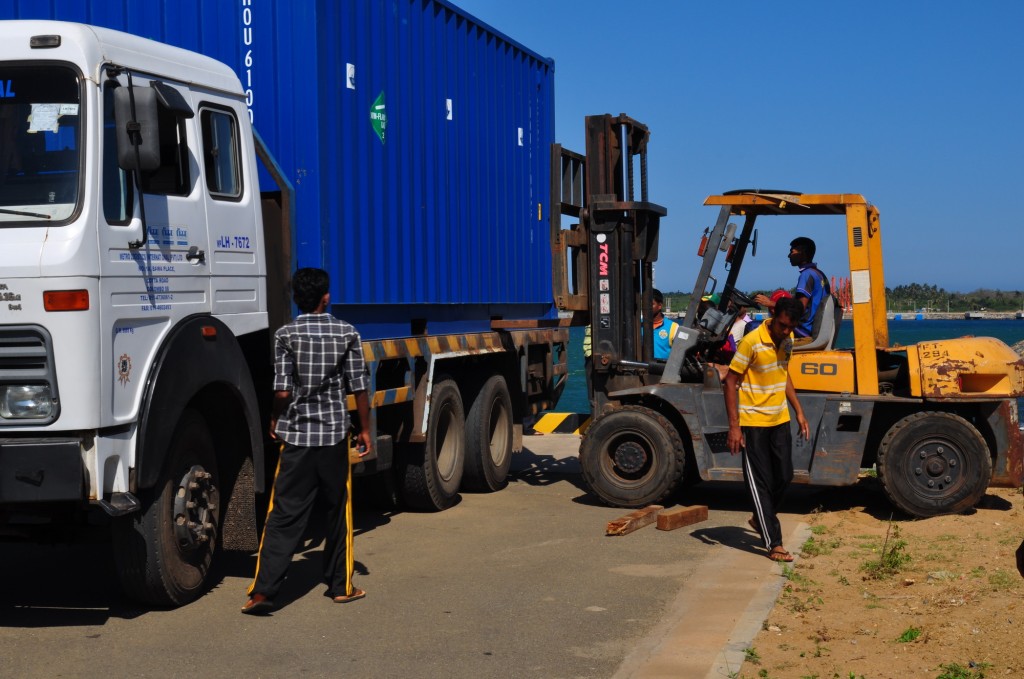 The first lift moves into position. Photo by Staci Willis. 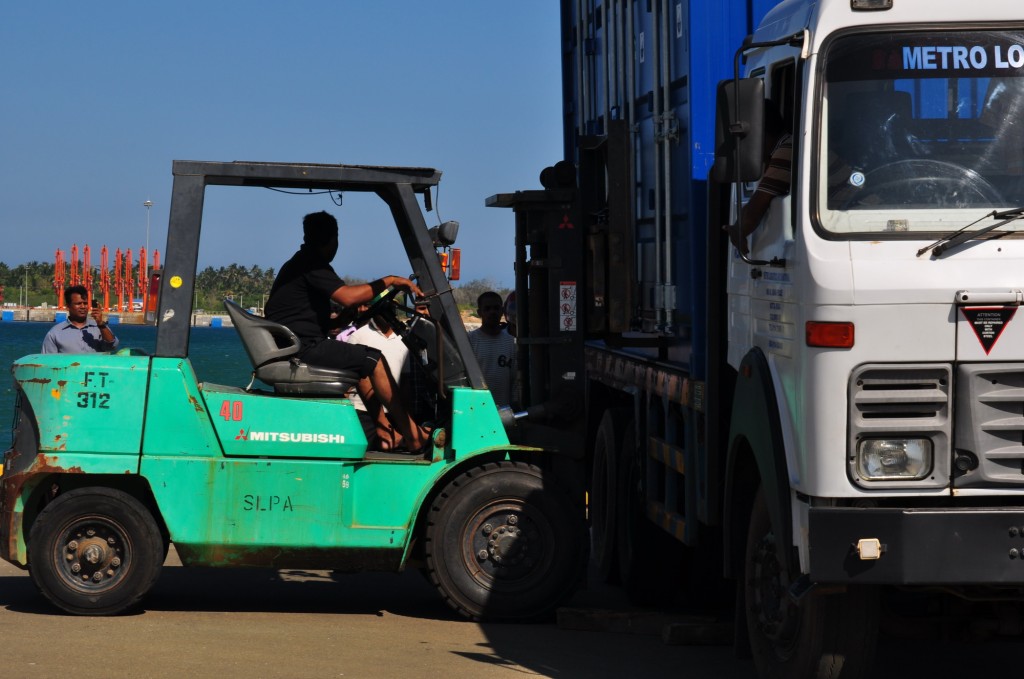 The second lift moves into position on the opposite side. Photo by Staci Willis. 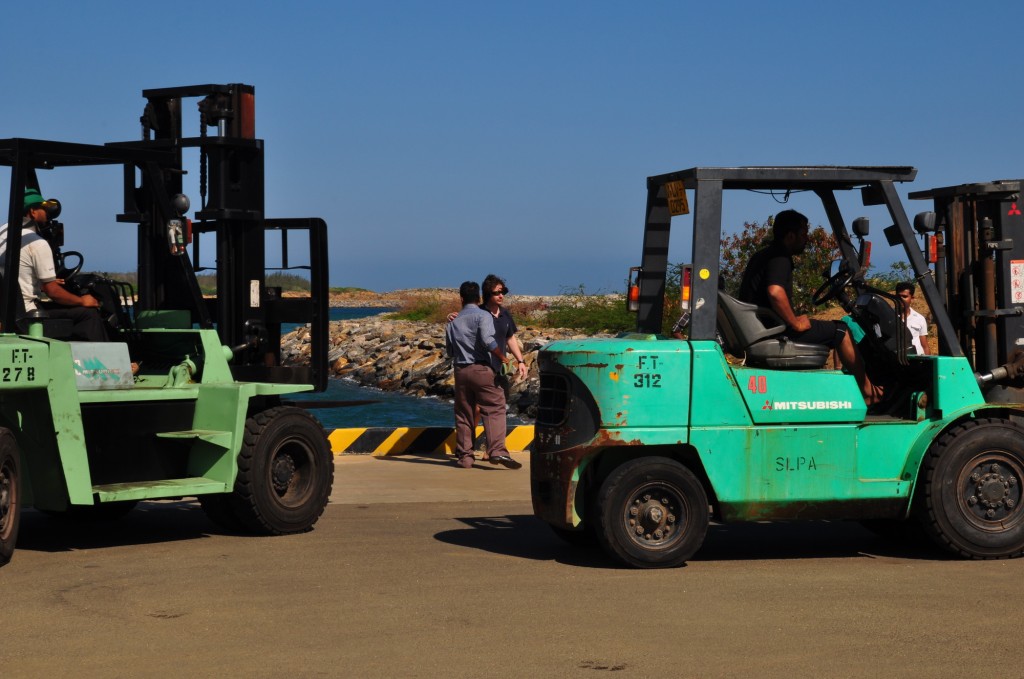 With the two smaller lifts in place, the big guy steps up to the plate. Photo by Staci Willis. 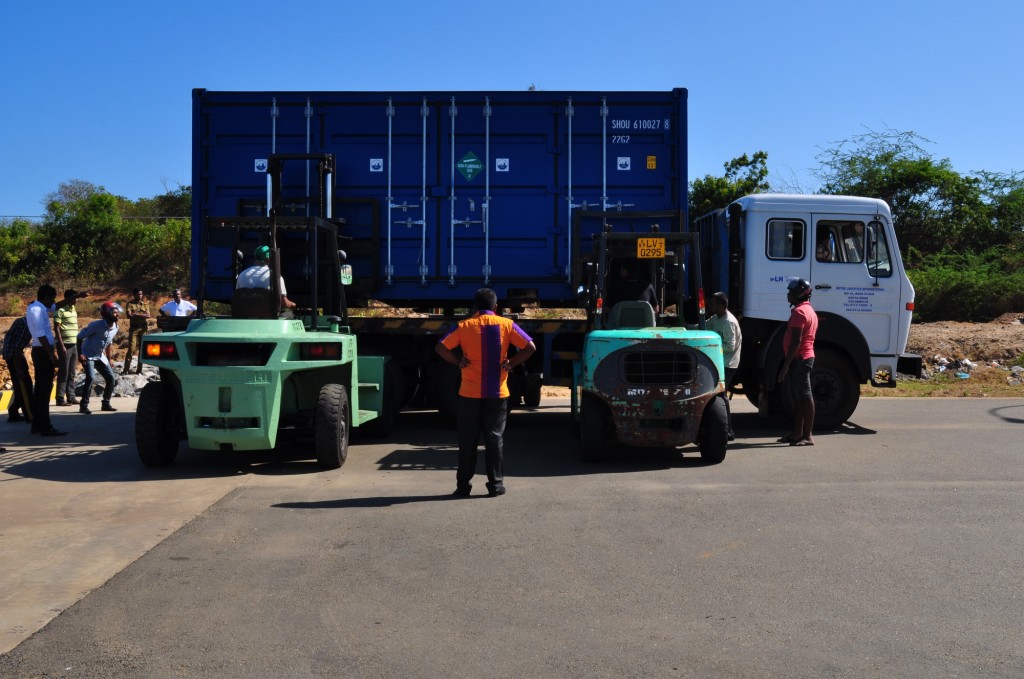 Teamwork is key here. All three lifts work together and daylight shines between the container and the bed of the truck. Photo by Staci Willis. 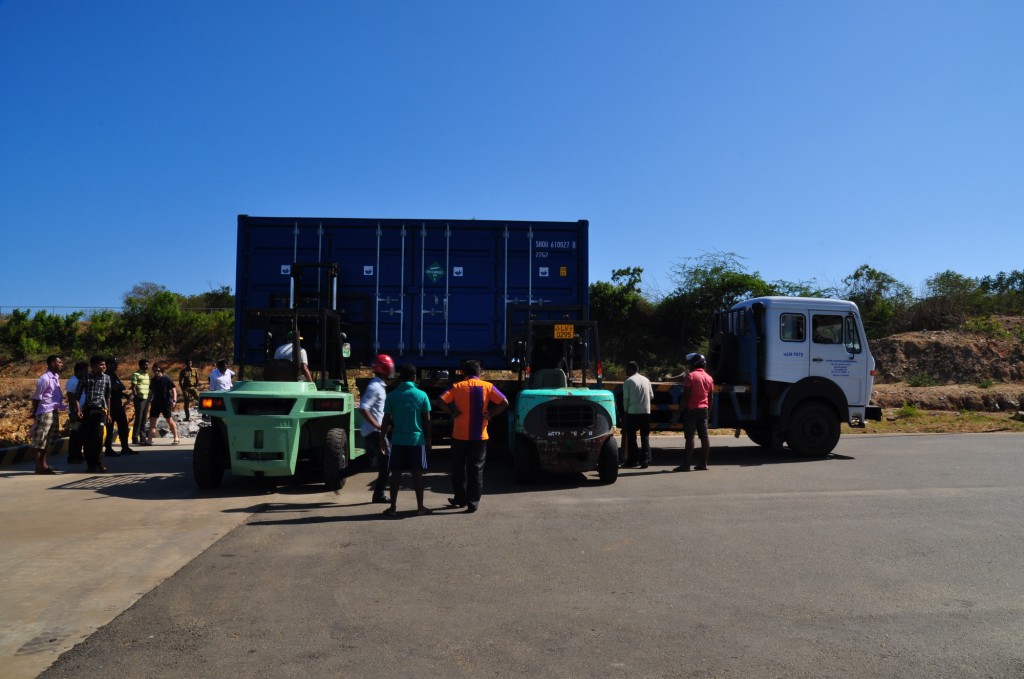 Everyone hols their breath as the truck pulls away. Photo by Staci Willis. 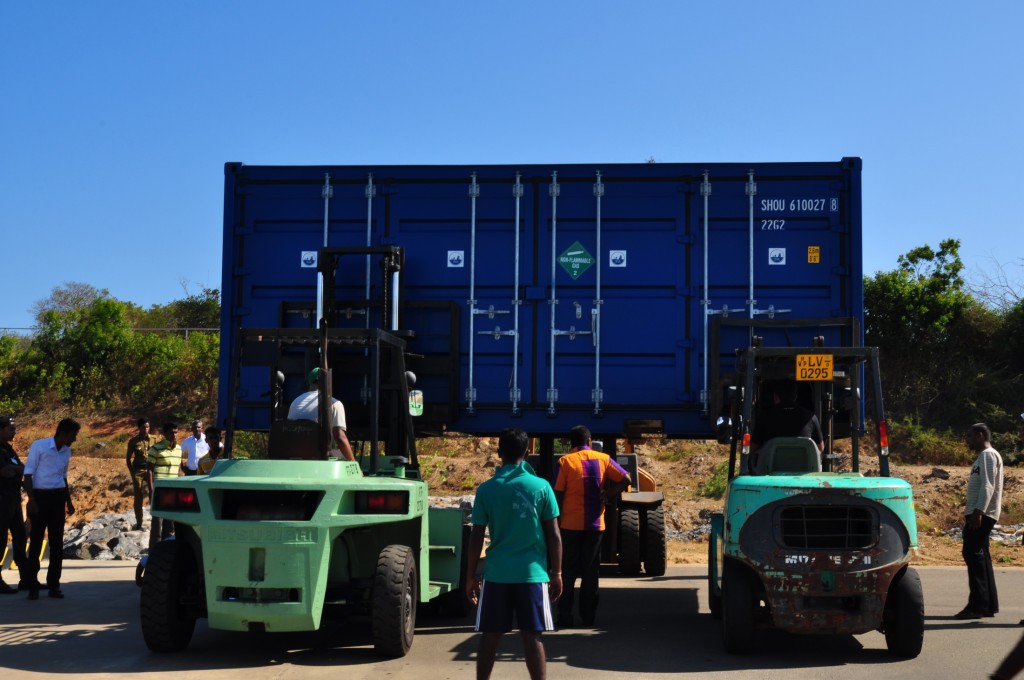 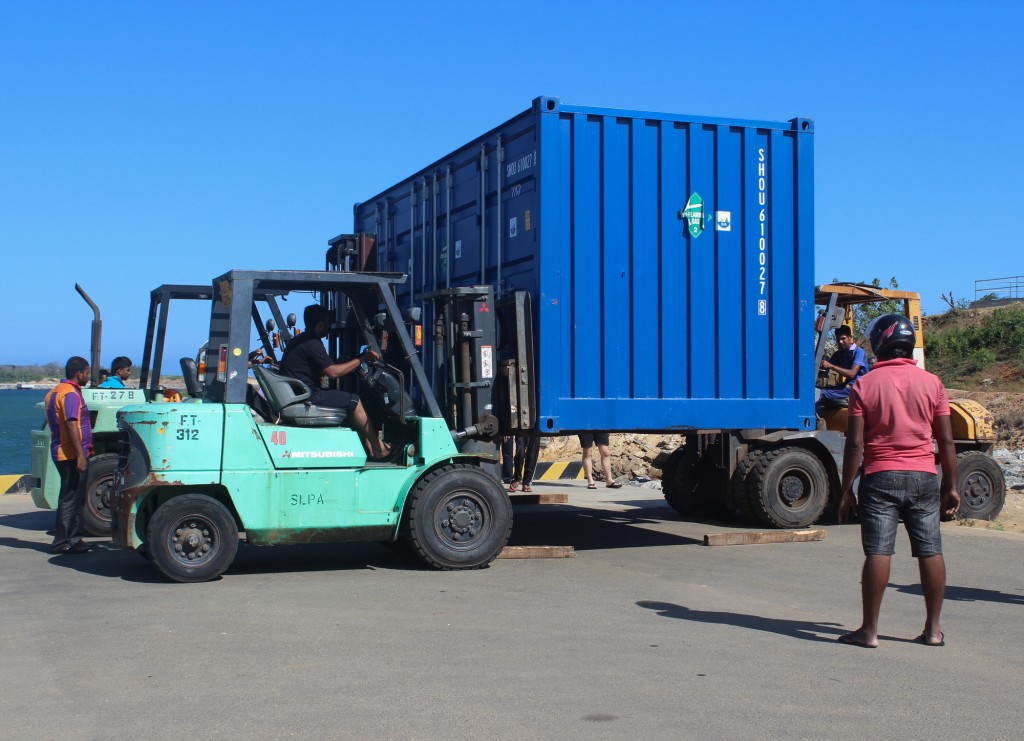 The container is slowly lowered to the ground accompanied by shouts, fits, and spurts. Photo by Arianna DiMucci. 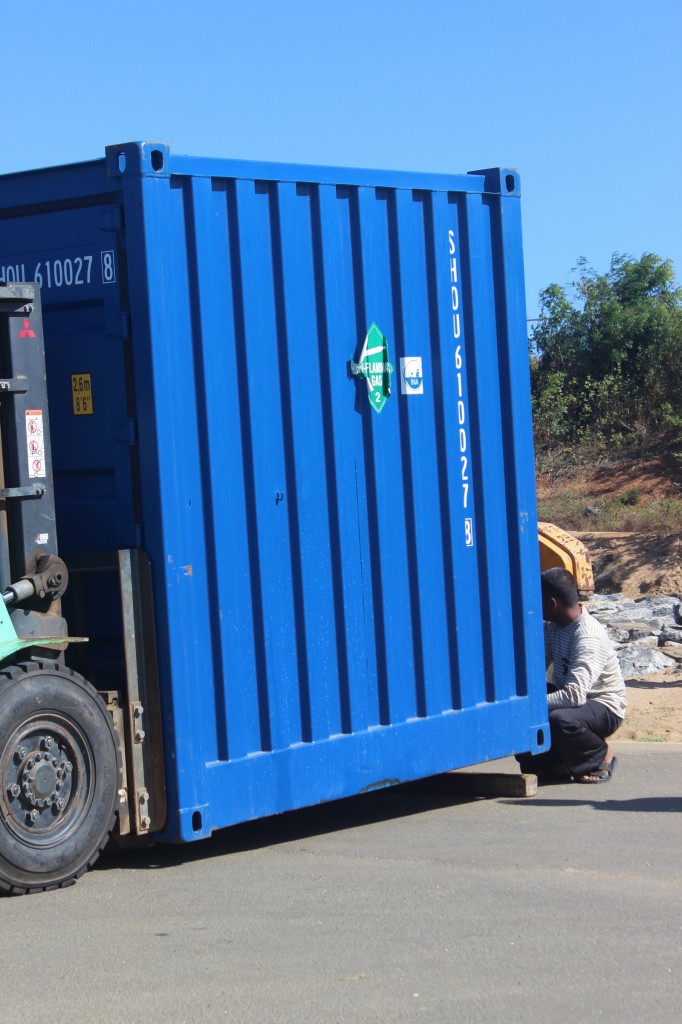 Blocks are placed at each of the four corners so that the container sits level. Photo by Arianna DiMucci. 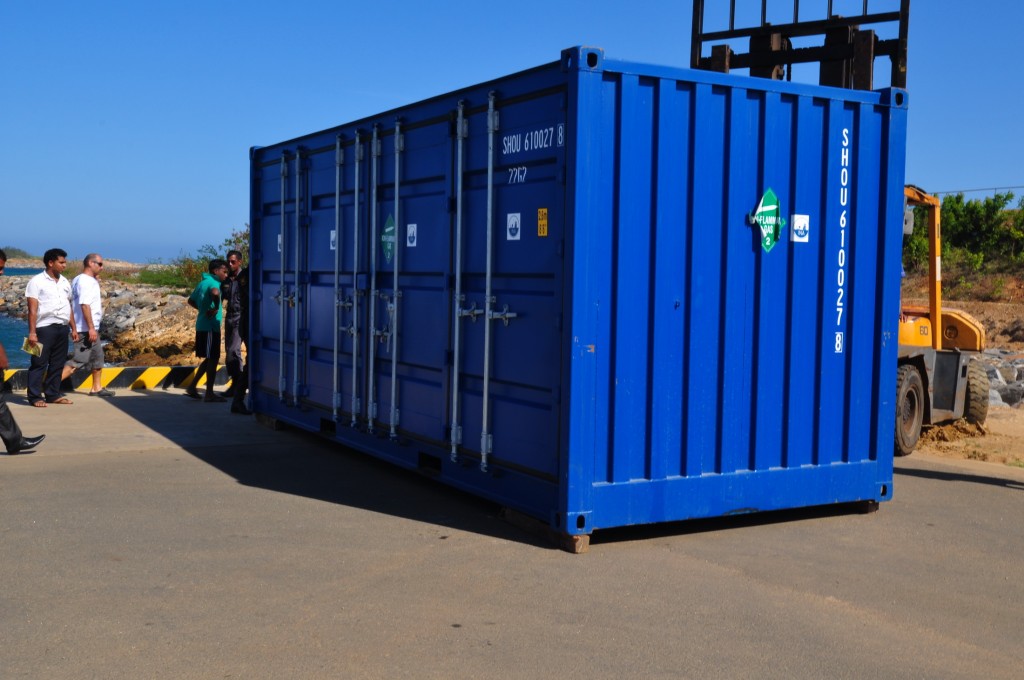 The container as it will sit for the next three months. It will serve as our main center to facilitate diving at the port. Photo by Staci Willis. 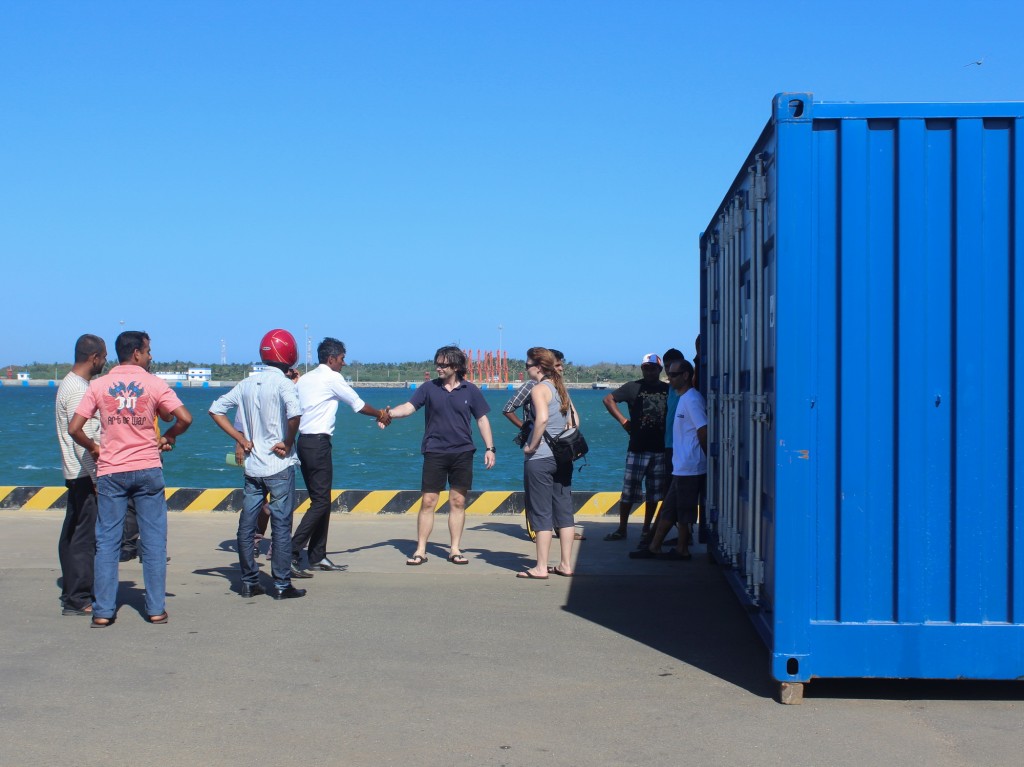 Handshakes all around for a task well done and long awaited! Photo by Arianna DiMucci. 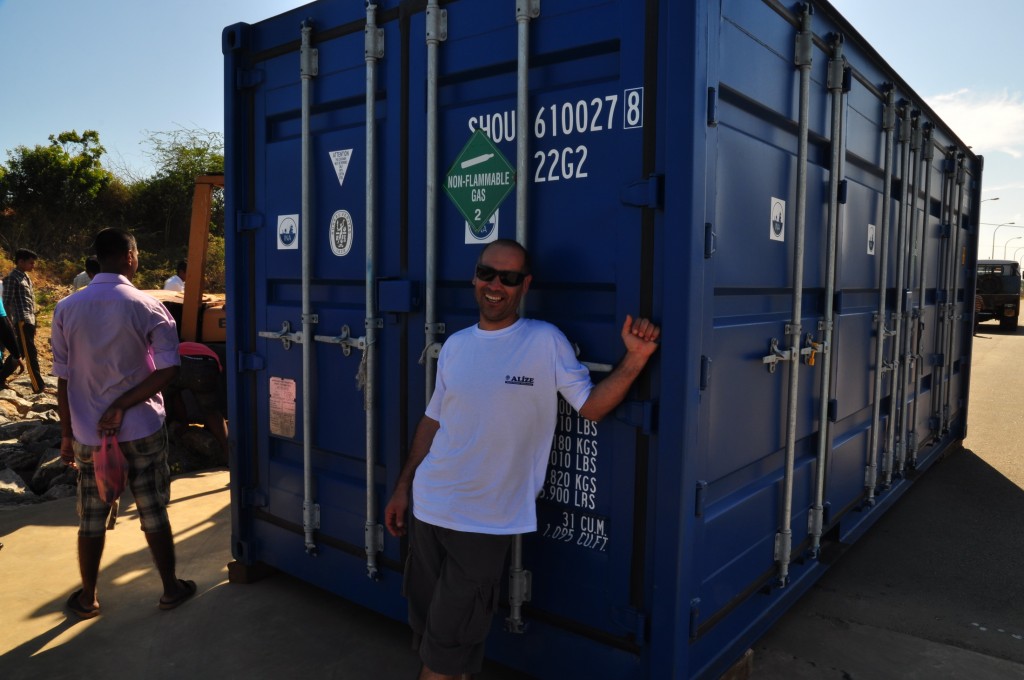 Zafer smiles, happy to see our container on the ground in Hambantota port. Photo by Staci Willis. 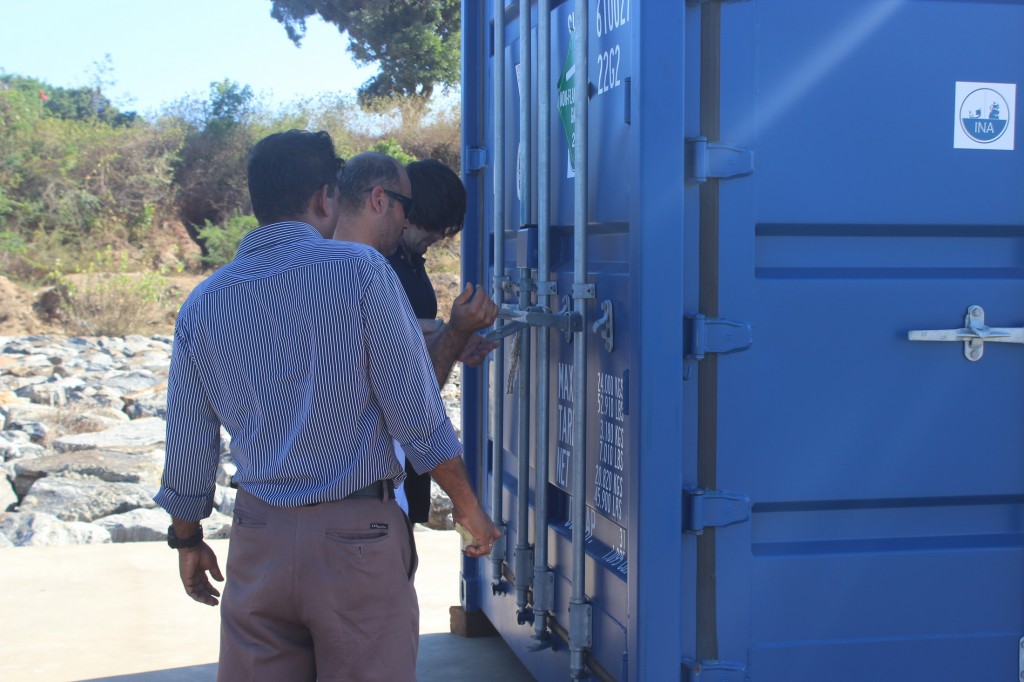 Orkan and Zafer eagerly crack open the doors to reveal the bounty inside! Photo by Arianna DiMucci.