A trip to Knidos

Having come early to Datça to get started with mapping and the organization of gear, Tyler, Emily, James and I found time for a Sunday trip to Knidos.  We arrived late in the morning to avoid the intense midafternoon sun. With little knowledge about the site, I was not sure what to expect or the extent to which these ruins were preserved.  Needless to say, I was surprised and delighted to be able to walk on ancient streets and the floors of ancient temples.  While I have seen pictures of Greek and Roman ruins before, not being a student of Archaeology or Classics, nor particularly well traveled, I was amazed by what I saw and couldn’t help but wonder what it must have been like to live in or visit this city in ancient times. 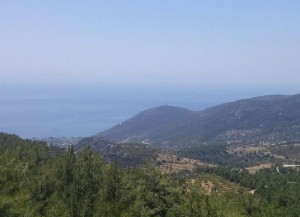 Before writing more about experience at Knidos itself, I would be remiss if I didn’t discuss the journey to this site.  As a GIS person who has worked with data concerning the Datça Peninsula, I had some idea of the topography of the area.  To be honest, the first time I saw the data for the peninsula—particularly its slope—I did not believe I was looking at a correct representation!  While I later decided that the data must be correct, a part of me was still unsure, until I saw it firsthand and watched from the back seat as our car climbed up and down the steep paths.  This trip to Knidos had some of the best views I have ever experienced and certainly the best landscape.  Had I been driving, we may not have made it to Knidos at all, so many photo stops would I have taken (along the way, I made a mental note to visit one of the beaches we saw on the way, which I would do the following weekend). 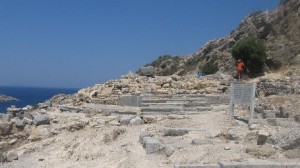 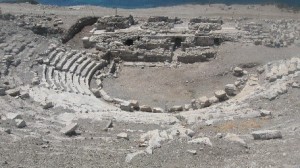 Of the many things we saw at Knidos: the temple of Dionysus, the temple of Apollo, the Round Temple (of Aphrodite?), the theater, etc., I don’t think I can pick a favorite spot.  What I can say is that I have a favorite aspect: the craftsmanship.  The techniques that went into making the Round Temple so round and the columns so decorative are what really impressed me. And although none of the architecture survives in its entirety, it has held up long enough for me to admire ages later.

Not only would I recommend a trip out to Knidos to anyone reading this post, but I would gladly go many more times myself.  I don’t think one visit provides even a fraction of the time required to explore this site in its entirety.  Finally, from the perspective of the Burgaz excavations, my visit to Knidos helped me to visualize the relative merits of the two sites, and to understand why the inhabitants of Burgaz may have decided to move. 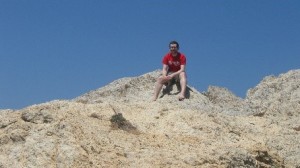