Excavation in L1 and along the sea wall 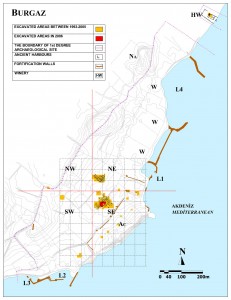 Site plan with location of Harbor 1 (L1) NE of Acropolis

For the area around Harbor 1, the goals for the 2013 season include determining whether the area within the seawall was in use or submerged in antiquity, and understanding the construction of the seawall in relation to the harbor, as well as the stratigraphic sequence and chronology of the area.

We began excavation within the seawall with work in Trench 1, located at the juncture between the seawall and Wall A, which extends west toward the shore. This trench was initially opened in the 2012 season, but we added a series of new 2m x 2m units this year. We also began work in Trench 3, located about 30m north of Trench 1 and intersecting the seawall. 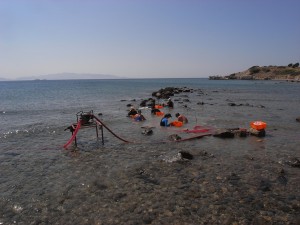 Excavation in Trench 1 suggests that the seawall was constructed by laying a rubble foundation for a superstructure of large stones, of which we have one course sporadically preserved along the length of the seawall. This foundation is largely comprised of compact, dark grey, shale-like stones; further away from the wall, the stones are more loosely organized, suggesting that they were either the result of wall fall or a buttress against the impact of the sea swells and winds, which are significant in this area, particularly in the winter. In Trench 3, about 6m from the sea wall we encountered a concreted layer of cobbles at a depth of c. 40cm, which appears to be deliberately fashioned, perhaps marking the remains of a quay. Closer to the sea wall, more rubble appeared, similar to that seen in Trench 1. 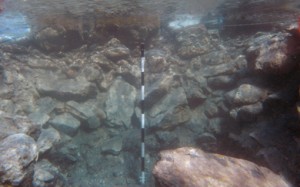 Profile of seawall near L1

In Trench 1 and Trench 3, we have found an abundance of ceramic remains in the first c. 25cm, most of which date to the Late Classical and Early Hellenistic Periods, along with a few from earlier period in deeper levels. Trench 3 has yielded many diagnostic finds, including common wares and transport amphorae. The ceramics in Trench 1 have been more heavily worn with fewer diagnostics. 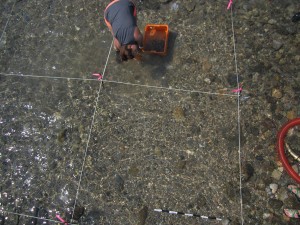 As a final project in L1, we resumed excavation in Trench 2, a 2m x 2m unit in the middle of L1 begun in 2012. In this trench, we hope to learn more about the earliest phases of the harbor and its depth in antiquity. In 2012 we faced problems moving layers of sea grass and dense pebbles, but our improved dredges should make the work easier this year. Once we make it through the pebble layer, we hope to find sand and sediment suitable for coring. 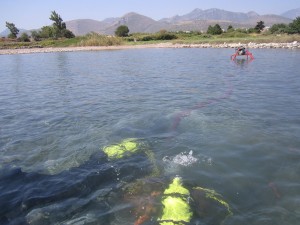