Working in the field for long hours often causes one’s mind to wander from the work at hand to future goals, and of course, to what might be for lunch. Sometimes it’s hard to separate how I feel in a moment of labour – tired and sore – from what the work means on a larger scale. 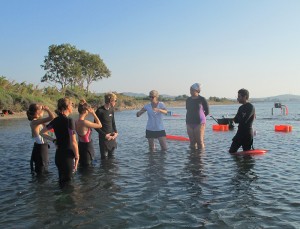 Discussions on site in L1.

The discussions that I have had with my team in Harbour 1 (L1), as well as with the whole project team, have helped me to explore my own thoughts and questions about what we are finding. Over the past week I have taken part in various discussions about what we’ve discovered in our trenches, one inside the seawall, the other inside the harbour. Inside the seawall we recently revealed a layer composed of concreted rock that is difficult to dig through. This layer contains many ceramics, including larger sherds and diagnostic finds. The area may have been resurfaced multiple times, creating a thick, compacted layer of rocks and ceramics. How often did this resurfacing happen? What purpose did the area inside the seawall serve? What can we tell from the ceramics jumbled together with the stones? And—as I wonder while considering my own lunch—was this area used by passing sailors to stop for a meal?

I am also curious about the differences between the artefacts we’ve found in the different areas of our trench: one behind the seawall, the other inside L1. We’ve seen the pebble layer only inside the seawall; inside L1 the soil is filled with vegetation, shells, and organics, along with some pottery and worked stones. How did the two sides of the trench relate to one another in the harbor setting?

Group discussions are great motivators for the work that we do; they provide a chance for us to hear everyone’s opinions about what has been found, and expose us to various points of view. Questions about what the harbor may have looked like when it was in use, what the areas we are excavating could have been used for, and how the areas on either side of the seawall worked together all drive our daily work. The entire Burgaz team has similar discussions on Saturday nights, when we sit as a group and chat about the week’s activities. These talks are enjoyable: they allow everyone to learn about what is going on in the different harbours, the ceramics, and the GIS. While I still occasionally think about the lunch menu when my stomach grumbles in the field, my mind can also ponder the meaning of the work we are doing, and this allows me to enjoy the whole experience even more. 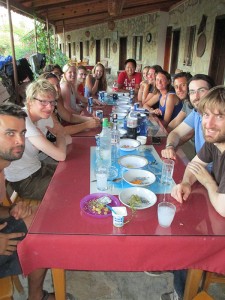 Team discussion on a Saturday evening.