Exploring the harbors of “Old Knidos” 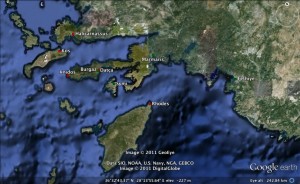 Excavations at Burgaz, on the Datça peninsula of southwest Turkey have been conducted by Middle East Technical University (METU) since 1993. The archaeological project has revealed uninterrupted activity from the Geometric period through the Early Hellenistic era (8th-4th centuries BCE). During the Archaic and Classical periods, the town’s residents enjoyed extensive domestic quarters and civic structures arranged on an orthogonal plan. With its proximity to some of the most fertile land on the peninsula as well as ready access to the sea, Burgaz is often considered to be the early settlement of the Knidians, long famed in antiquity for Praxiteles’ Aphrodite statue. By the late fourth century, the nature of the settlement at Burgaz undergoes a dramatic shift as workshops and industrial zones geared primarily toward processing and storing the region’s agricultural produce replace domestic and public spaces. At the same time, the site of Knidos, on the tip of the Datça peninsula at Tekir, develops as a civic and religious center, situated at the juncture of the Mediterranean and Aegean.

July and August 2014 mark the fourth season of archaeological investigations in the harbor complex of Burgaz conducted by Brock University and Stanford University in collaboration with the METU team and INA. Surface survey and test excavations suggest that in its foundation and initial development, the port served as a center for communication and trade throughout the Carian region and neighboring islands. That the town continues to utilize (and in some places expand) its harbor structures and fortifications in the Late Classical and Early Hellenistic periods, even as the settlement changes its focus toward industry, may suggest that the design of the harbors also shifts to meet the new economic opportunities and needs of local production and distribution. With the growth of Knidos as the region’s preeminent religious and commercial center, looking outward to a larger Mediterranean world, Burgaz does not recede into the economic background. Rather, the port seems to take on a new role as a link in the supply chain. Continued proximity to the peninsula’s fertile interior, combined with access to raw materials and ceramic production areas, allows Burgaz to expand its industrial and commercial focus through its integration with the growing maritime economy of Knidos.

Any cookies that may not be particularly necessary for the website to function and is used specifically to collect user personal data via analytics, ads, other embedded contents are termed as non-necessary cookies. It is mandatory to procure user consent prior to running these cookies on your website.