Journey Down the Peninsula: Our Visit to (New) Knidos

“Superior to any other statue, not only to others made by Praxiteles himself, but throughout the world, is the Venus, which many people have sailed to Cnidus to see”

While the statue of Aphrodite no longer graces the site of Knidos, the ruins of the ancient city still draw many travelers to the memory of its great past. Our particular interest in travelling there was to understand how its harbor compares to where we are working at Burgaz. So early on Sunday morning, Megan C, Grace, Annie, and I made the long sojourn via dolmuş from Datҫa 35 km west to Knidos.

After an hour and a half of scenic mountain views and copious amounts of Crax (a delicious Turkish junk food) we finally arrived. Walking into the site entrance, we are met by a sweeping view of the harbor to the left, as ruins of temples and other public structures occupy the steep slope to the right. Mosaics peek out from under dusty pathways and half revealed drainage systems remind of the vibrancy that must have once animated this city. 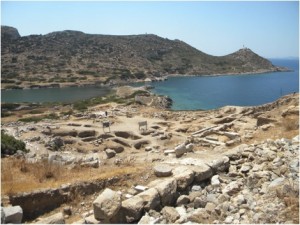 View of the trireme harbor and site 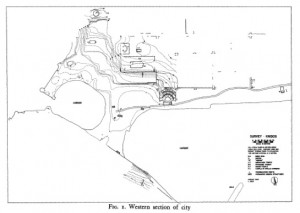 We immediately set out for the trireme harbor (picture 1 &2), having been previously informed about the survival of a mooring stone near its entrance. Well prepared from our own excavations near a seawall, we scrambled quickly down the side of the wall and onto the tumbled blocks below to begin our search (picture 3). While our search was unsuccessful (the mooring stone was in fact in the other harbor), it was a perfect vantage point to see the large cut stones that fortified the entrance of this military harbor. 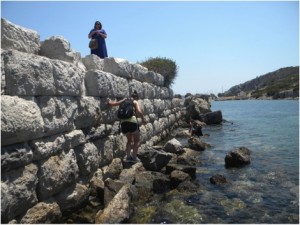 Looking for a mooring stone at the trireme harbor

Located at the joining of the Mediterranean and Aegean seas, Knidos was a major player on the Anatolian coast, a fact attested to by the existence of its two harbors, the military harbor we were currently viewing, and a commercial harbor situated directly behind it. The commercial harbor is still a popular spot for boats full of tourists ready to cool off in the blue green waters. 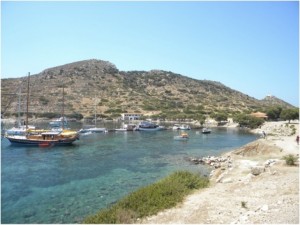 After enjoying the sea breeze that blows in over the harbor wall, we began a climb up the slope, weaving through the remnants of impressive architecture such as Apollo’s Temple, and the Round Temple which commands striking views of the entire site. It was interesting to note just how much public architecture was located in close proximity to the harbor, giving the impression that it was the central focus of the ancient city. 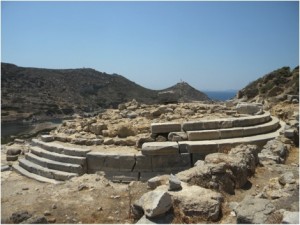 Ruled by the dolmuş schedule, we ended our visit all too quickly with an ice cold Yedigün and a memory card full of picturesque photos. Faced with the very long and windy bus ride, I couldn’t help thinking how nice it would have been to sail out of one of the harbors we saw on our visit instead.