Most people see a distinct division between maritime archaeology and terrestrial archaeology. Underwater, scuba divers float gracefully over piles of amphora in loose sand; while land archaeologists wearing hiking boots and cargo pants brush dirt off pots in deep (and perfectly square) units. In the Burgaz harbors, there is no such line. Just like the harbors themselves, the archaeologists working here have to navigate the intersection between land and sea. Our trenches look much like those on any land site, except that they are filled with water and we usually wear wetsuits while excavating. While it can be nice and cool—especially in the summer heat—the environment presents certain logistical problems that don’t come up on land. The soil we are digging gets stirred up in the water, reducing visibility in the squares; the depth of our trenches changes with the tide; and we move dirt using water dredges rather than buckets and wheelbarrows. 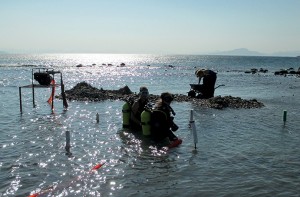 In a harbor context, it’s not just the digging methods that blur the line between underwater and terrestrial archaeology. As a result of sedimentation and changing sea levels we find some submerged features that surely once stood on dry land; some marine structures may now lie under a crop of tomatoes.  So how does an underwater archaeologist deal with these structures? The answer is simple: much like a terrestrial archaeologist would. We measure and record features at Burgaz just as we would any other site. It is not so much the “how” that separates underwater archaeology from terrestrial archaeology, but the “what”. After all, we are not interested in this site because it is underwater; we are interested in what this site can tell us about the people who lived, worked, and sailed here—no matter how we obtain the data.