I sit on lots of things, chairs mostly, but I love a good couch or bed to rest my weary bones on and I’m usually not opposed to the floor or a nice sized rock.  What are never included in the list of what I sit on, however, are babies.  That seems weird and frankly very dangerous for the poor child acting as a support for a full grown adult.  So why, as an early childhood educator, am I usually called a babysitter?  I have no idea.  I’ve never liked the term or identified with it.  That being said, you can imagine my delight when I found out that here in Turkey, my people are not called babysitters.  Instead, we are called bakıcı, or in English, “watchers”.  How cool is that?  It almost has a biblical air to it, reminding me of the angel who spoke to Nebuchadnezzar in his foreboding dreams.  No, I don’t think of myself as some holy being, come down to bestow my eternal wisdom on the child in my care, but watching is the foundation of my job. At his age, the ordinary is rather extraordinary. Though I do other things, like feed and clothe and comfort and snuggle and sing, his exploration keeps me watching all day. So you see, bakıcı is a much more apt name for what I do. 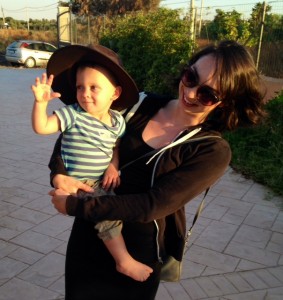 Max and Elise, the bakıcı

Max, the son of Liz and Justin, is the coolest 15th month old around and happens to be the perfect combination of his parents.  He is busy and curious, adorable and hilarious, and loves to say “Ba”.  Through my watching duties, I’ve noticed that Max’s favorite activity is putting things in other things.  A rock on the floor?  That goes into a cup.  A couple of kuruş?  Those will fit nicely in this medicine container.  Some tiny berries scattered about?  Well obviously those should be jammed into the grooves of this here clothes pin.  Toys hardly ever work their way into the rotation of things played with.  He does love his books and will devote a few minutes of his day to stacking blocks, but other than that, the natural world and everyday household items are what he’s interested in. 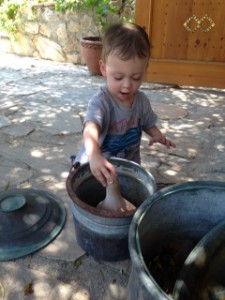 Two natural toys: a gourd and a pot

Max’s penchant for ordinary objects brings to mind an interesting conversation that I had with Liz and Justin in which they explained that toys are only rarely found in archaeological excavations.  Perhaps it’s because most ancient toys were made out of wood or other materials that eventually decomposed and were never able to be excavated.  Or maybe it has more to do with the simple truth that toys, as we think of them now, have never been a necessity and weren’t treated as such in ancient times.  If Max can be surrounded by manufactured toys and still opt for the classic rock-in-cup, I’ll bet that children in the ancient world could have been pretty happy placing stones in amphoras or other artifact-y things.  I’m no archaeologist: all I can say is that when I see the delight on Max’s face when he shoves a twig into an empty snail shell or plops an almond in a puddle, I am reminded of the value there is in letting children explore their surroundings just as they are.

Manufactured “edutainment” toys may be marketed to parents as essential for their child’s developmental progress, but it’s just not the case.  Children will continue to develop cognitively and physically whether they’re putting stones in ceramic containers or pushing buttons on a fake phone.  I tend to think the more natural mode of exploration is healthier in that it gives children a chance to appreciate the environment around them, but that’s just me.  And who knows?  Maybe this disinterest in toy products is just a phase and Max’s next favorite thing will be playing Candy Crush on the iPad.  I guess we’ll just have to watch for what happens next in the life of Max.  That’ll be easy for me; I’m the bakıcı after all.