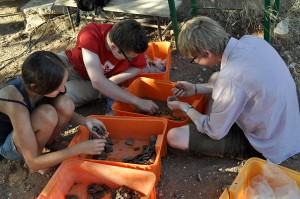 With Emily and Nick, Peter sorts the pottery from one lot.

One of my daily activities at Burgaz has been the examination and sorting of the sherds recovered from the harbours. I was introduced to the five functional groups of ceramics: amphora, fine ware, cooking ware, common ware, and bricks/tiles/pithos. Swiftly, I was pushed into the deep end and began to sort some of the huge numbers of sherds that were recovered, the majority of which came from my own units in L1.T5.A-B. Although the task first seemed headache-inducing in its enormity, I quickly began to grow fond of the first hand and intimate experience with the sherds we were finding from the trenches. It took a few tries before I became better acquainted with the task, and I was still making a few mis-categorizations. But with the help of Liz and Justin’s 15-month-old son Max, I was taught a valuable lesson in the distinction between dark amphora fabrics and cooking ware! 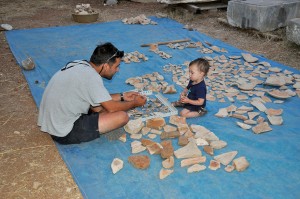