While the idea of discovery may draw most people to a career in archaeology, it is the recording of these finds that truly embodies the core principals of our profession. One of the first things archaeologists learn is to write down and keep track of what they have done. Often times the recording is more painstaking and time consuming than the actual digging!

Even though this excavation is mostly concerned with structures situated in the harbors, there are other features that are associated with the city, but are located just on shore. In our case, we are recording a wall that may have been part of the city walls of old Knidos. It is only about a meter inland from the shore, and spans harbors 2 and 3. 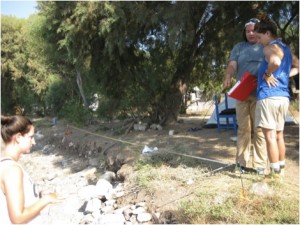 Two people must work together to record an architectural feature like a wall. In order to take precise measurements, a baseline must first be set up. We stretch a string between two pieces of rebar hammered into the ground. Using a line level, we make sure the baseline is completely level and doesn’t sag in the middle. Next we attach a tape measure to the rebar at the same spots as the line so it too is level.  One person takes another tape measure and using a plumb bob, finds the measurement at the same level as the baseline. 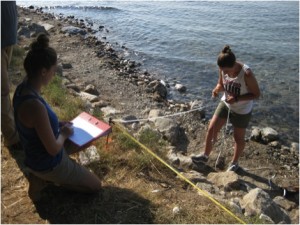 The person measuring holds the plumb bob directly over the point she wants to measure and finding the shortest measurement between the line and the plumb bob. The other person then records the point on millimeter grid paper. Once enough points have been recorded, a rough outline of the rock is drawn. The recorder then fills in the details and slowly a complete outline of the wall begins to form.

After we had rendered a drawing of the entirety of the uncovered wall, we used a Total Station to take points along the wall’s four corners, and down the sides parallel to the sea, in order to plot the shape of the wall. When we put these points into ArcGIS, we can put the wall on the map, so to speak, in real world space.

It is important to have a thorough record of what is excavated because we may not get another chance to examine structures, even if they have already existed for thousands of years. In our case, tourism is increasing in the area where the remaining wall exists, which could lead to erosion or inadvertent destruction of the feature. So while drawing and recording may not be the most glamorous aspect of an archaeological project, it is certainly an integral part. 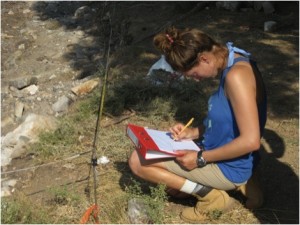 Sarah records measurements and draws details of the wall