Prior to joining the Burgaz Harbors Project team for 2014, I was working on the Marzamemi Maritime Heritage Project, excavating a Byzantine shipwreck off the coast of Sicily.  This summer’s fieldwork has allowed me to compare the differences between working on two different forms of maritime sites, with the shipwreck representing one event or moment in time and the harbors representing multiple phases of use over hundreds or thousands of years. The nature of each type of site leaves a distinct composition of archaeological materials for us to excavate and study. 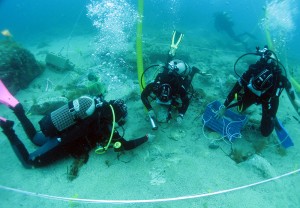 Marissa working underwater on the “Church Wreck” at Marzamemi, Sicily

After removing the top, loose layer of sand in our trenches at Marzamemi, most of our excavation occurred in a single layer consisting of small pebbles, sand, and light colored silt until we reached bedrock.  In a few areas we came across a color change from light silt to black, but this was most likely due to natural processes of decayed sea grass or organic wreck material.  This stratigraphy is not surprising because we presume the shipwreck represents one event in time and thus the entire site deposition occurred at roughly the same time.  In comparison, excavating in the harbors of Burgaz is much more similar to terrestrial excavation, where we have seen several distinct changes in the bottom composition, indicative of different context layers. Each context layer may represent a different phase or change in use of the harbor over its lifetime. We hope that these discrete layers and their associated diagnostic finds will help us understand the stratigraphic sequences and chronology of events in the harbors.