By Department of Classics, Brock UniversityAugust 9, 2015August 16th, 2015No Comments 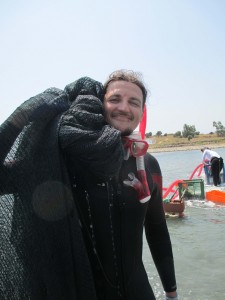 Michael’s triumph over the Onion Net

Corwan and my introduction to the Burgaz Harbors Project has come in the form of removing the backfill placed in 2014 into L1’s Trench 5, units L and M. A layer of green mesh protected the excavated area; removal of the backfill became a hunt for this mesh, which we found in many layers, wrapped around the backfill in layers like the skin of an onion. Though I have not yet experienced true stratigraphy on the site, I present here an (somewhat humorous) overview of our triumphant work.

This is the Onion Net’s easily removable crunchy skin, which will never make contact with its core.

[The loose silty topsoil, under which the net resides, beneath more than a metre of rocks/gravel.]

While peeling the second layer, we develop a sense of the entire picture, learning how to operate the tools required for the removal of the Onion Net’s layers, and its eventual dicing.

[During the removal of approximately 30 cm of backfill, we become acquainted with underwater archaeological methods and equipment, including the trowel, shovel, bucket, dredge, SCUBA gear, and how to work in limited visibility.]

After peeling off the second layer, we think that the Onion Net is ripe for dicing, but realise that the next layer is spoiled and soggy.

[After excavating the backfill to approximately 60 cm, a few traces of the net appear throughout the pit, but we find ourselves bombarded by many more stones and much more gravel. When we try to pull at the net, it doesn’t budge an inch.]

The Onion Net’s insides are uncovered after the removal of the third layer, and our eyes began to fill with tears.

[The net begins to show itself in its true form, getting stuck in the dredge, making visibility very poor, leaving us disorientated, with emotions spinning from angry, to hopeful, to sad as we wonder when we will ever finish our task.]

Yet another layer of the Onion Net is revealed and acidic juices from spoiled layers spray more forcefully into our eyes.

[The net is almost completely removed, but large rocks hold it down, which must be removed. Each rock’s removal causes a cloud of sediment that reduces visibility almost entirely. The net also becomes monstrous, wrapping us up in its mesh flesh!]

The Onion Net is now peeled and diced, with all its skin and spoiled layers thrown into the bin. Now we have the satisfaction of frying the Onion Net and cooking our meal.

[When the majority of the gravel and all the large rocks have finally been removed, the net is ready to be pulled out. Back on shore it is time to light the net on fire (a.k.a. wash and store for the end of this season), and happily begin real excavation using the skills we learned from defeating the Onion Net.]

**No Onion Nets were harmed during the activities described in this blog.