Now working toward my M.A. in the Archaeology stream of Brock’s Department of Classics, I began participating in the Burgaz Harbors Project in 2012 when I was an undergraduate at Brock. When I first heard about the project, I was excited to develop my archaeological field skills and become more familiar with marine and coastal archaeological sites. I had previously excavated terrestrial sites from Roman Italy and Bronze Age Greece, but I was most interested in the Classical and Hellenistic world and this project seemed like a fantastic opportunity to refine my interests.

My first field season at Burgaz was a whirlwind. Despite having no prior experience with the recording of archaeological features, I learned to measure, record, and draw, then began working with Tarah drawing one of the large stone harbor installations in L2. By the end of the summer I had helped to draw five dolia situated along the coast and a large workshop located in L4 (an area revisited this summer to consider the coastal production and distribution of wine). Meanwhile, Lana taught me the basics of how to set up and use the total station in order to map the features we drew as well the general topography of the site. 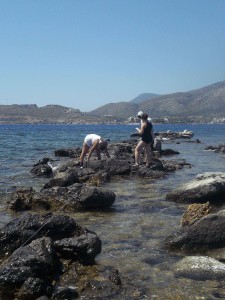 Molly and Tarah record the northern mole of L2 in 2012.

Beyond the technical skills I learned on land, I also learned how to excavate in the water. Working in a harbor means we are neither on land nor fully submerged in water and it can be challenging to excavate. Starting at a relatively shallow depth in L1, where the water was no higher than our ankles, we used our hands and small shovels to remove an initial layer of rocks and sediment. As we dug deeper, water dredges facilitated the process, and I learned not only the techniques of wet excavation, but also the mechanical aspects of operating water pumps and keeping the machinery up and running in our challenging environment.

The past two years on the project I have been adding to my list of field skills, including artifact photography, digitizing drawings with Adobe Illustrator and recently learning how to draw artifacts. During my work at Burgaz I have learned many valuable archaeological skills that I hope to use throughout my career. From an intellectual perspective, the harbor setting has inspired me to consider the archaeological landscape—particularly the architecture—of commerce and exchange, a topic I am exploring for my M.A. thesis in the Department of Classics at Brock. More on this in a future post!