The second part of the post about Artifact Conservation in the Finisterre Project. I hope you enjoy! 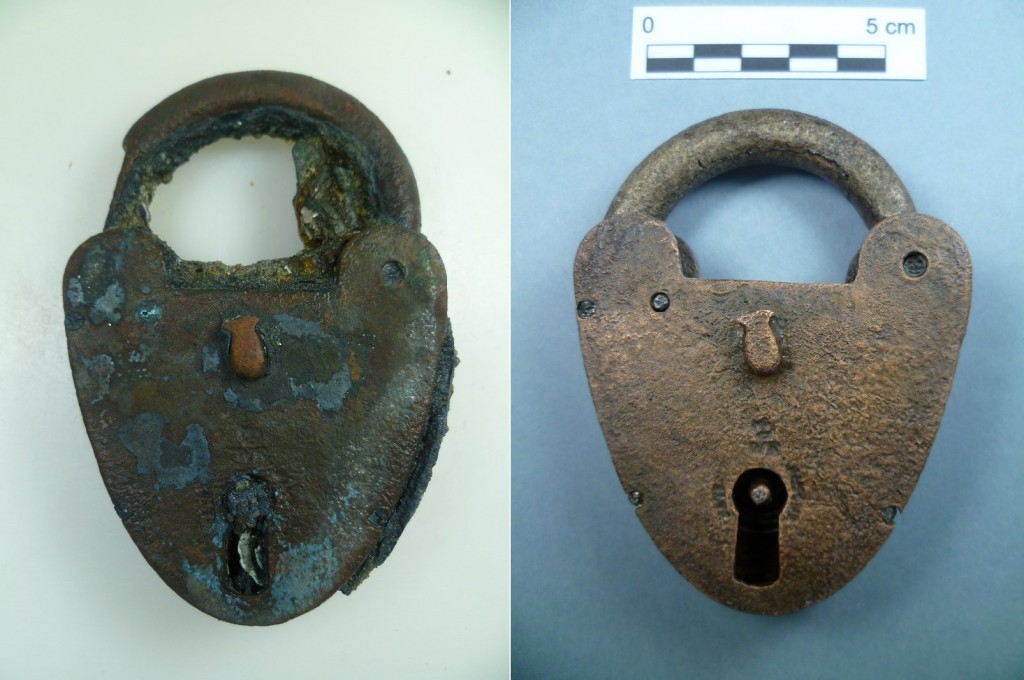 Metals were classified in two groups. The first one included those objects with a sound metallic core and a well preserved original surface which were treated by electrolytic reduction. The second group was composed of those that were highly mineralized and too friable to endure the electrolytic treatment. These artifacts were stabilized by the extraction of chlorides through chemical baths. After treatment, the objects were rinsed, inhibited and protected with an acrylic resin.

Conservation of waterlogged wood has two main goals. Firstly, the incorporation of a material that will consolidate and provide mechanical strength to the wood while the water is being removed. Secondly, the extraction of the water in a manner that any shrinkage or distortion will be avoided. The methods used were two: the polyethylene glycol (PEG) method for the wooden objects and the acetone-rosin method for the composite wood-metal objects.

The most important step in the treatment of pottery was the removal of soluble salts that may crystallize within the pore system causing cracks and weakening the artifact. Once the salts were removed, the piece was allowed to dry naturally before cleaning because a wet cleaning would be too aggressive and may erode the surface.

Though the main goal of all conservation treatments is preservation over aesthetic considerations, in some cases the improvement of the appearance of the objects is spectacular. This is especially true in the collection of cutlery recovered from the Great Liverpool, where the surface was extremely well preserved under a layer of corrosion products and sand.