INAA holds a significant film collection, both moving image and still.  According to the most recent inventory, there are 479 cores of moving picture film and over 40,000 slides.  The moving image film collection is comprised of mainly 18 mm polyester film, lengths of which range from 50 to 400 feet.  These films document some of the earliest scientific achievements in underwater archaeology. 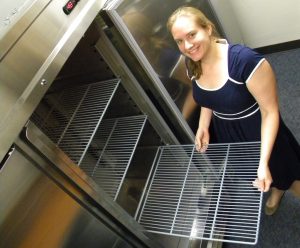 Meg Hagseth Installing the Shelves of the New Film Refrigeration Units.  Polyester Motion Picture Film should be stored in a cool environment with a low relative humidity.

This fall, the INA Archives received two brand new top-quality commercial refrigerators to store hundreds of reels of decades-old archival film. The two units were provided to INA by the College of Liberal Arts at Texas A&M University, and will soon house INA’s collection of over 400 cores of polyester motion picture film. This important footage documents INA shipwreck excavations including those at Uluburun and Yassıada, Turkey. Thanks to College Dean Pamela Matthews for helping INA preserve this priceless, irreplaceable footage documenting some of the earliest scientific achievements in underwater archaeology. The process of cleaning, cataloging, and moving the film to cold storage has already begun, updates of our progress will be posted here 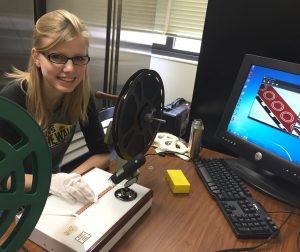 Intern Jess Conklin cleans the film with a non-wax cleaner and cotton pads to remove any dust.  Using a digital microscope, she checks the film for sprocket hole damage, splice condition, and warping or delamination of the film.  The Archives workroom has been outfitted with a pair of rewinds and a lightbox to make handling the film easier.  Each film will be cleaned, cataloged and then packaged for cold storage.