A.J. Goddard Back in the News 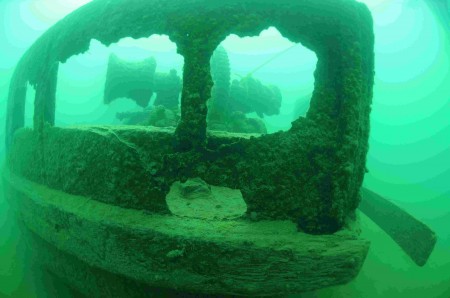 WHITEHORSE – Tourism and Culture Minister Elaine Taylor is pleased to announce the designation of the A.J. Goddard shipwreck, the sole remaining example of the small sternwheelers used during the Klondike Gold Rush, as a Yukon Historic Site under the Historic Resources Act… “The Yukon government is pleased to designate this important piece of our history,”

Tourism and Culture Minister Elaine Taylor said. “The A.J. Goddard is not only a testament to the ingenuity, sense of adventure and determination of those men and women who took part in the Klondike Gold Rush, but also to the key role that the river and sternwheelers played in the economic development of Yukon.” Link to the full release here.

Watch Canada’s national television network CBC coverage (Goddard piece approx. at 36min mark of the broadcast video) of this summer’s return to the Yukon by the international archaeological team led by INA’s John Pollack and including Lindsay Thomas, Texas A&M Nautical Archaeology Program graduate student and the Yukon’s, Dave Davidge who was the first to locate the wreck in 2008.

An international team of archaeologists discovered the perfectly preserved steamboat, A.J. Goddard from the Klondike Gold Rush lying in the freezing waters of Lake Laberge, in the subarctic wilderness of Canada’s Yukon. Their images of the sternwheeler were the first views of the frontier steamer since it disappeared in a winter storm on the lake in October 1901. Only two members of the five man crew survived, and Goddard’s location remained a mystery for one hundred and seven years.

The wreck was found during a survey of Klondike Gold Rush wrecks by an international team from the Institute of Nautical Archaeology (INA), the Yukon Transportation Museum, and the Yukon government led by INA Research Associate John Pollack. The survey, ongoing since 2005, is a collaborative project designed to pinpoint and document the dozens of wrecks that mark the river and lake routes once used by gold seeking “stampeders” during the last great gold rush at the end of the 19th and the beginning of the 20th century.

While the team has documented dozens of broken and abandoned steamers off the Yukon’s rivers, the discovery of Goddard is the first find of an untouched ship from the Gold Rush. Finding Goddard has been a dream of many years for team member Doug Davidge of the Yukon Transportation Museum.

Learn more about this and other archaeological work in Canada’s Yukon here.