I am standing on the stern of “Ocean King” some 5 miles off of Tel Aviv. It is hot: brutal, baking. I look back at the six people crammed in the stuffy cabin of the catamaran, and I am glad I am not inside. As bad as it is out here, there is a glorious sea breeze.

The Mediterranean is calm and unbelievably, mindbedningly blue. A long yellow cable snakes off some 88 meters into the sea below. At the far end, a Remotely Operated Vehicle (ROV – a SeaEye Falcon) is scanning the darkness with its onboard sonar. It twin lights light the seafloor, and an onboard camera transmits video back to Ocean King. Every few minutes Ishay (its co-owner and pilot) fires up the thrusters, re-positions, and checks the sonar again. 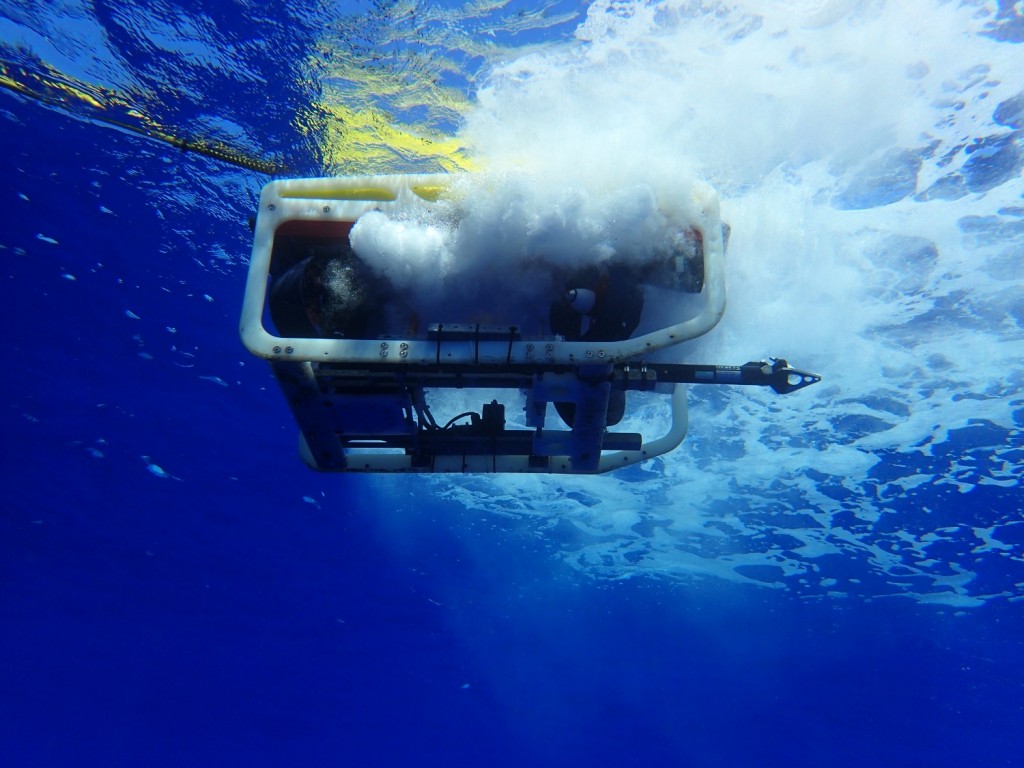 I am idly tending the ROV’s umbilical cable under the light-hearted guidance of Leor, the ROV’s co-owner/engineer. The umbilical is coiled over two struts off the transom. We feed it out as the ROV dives and moves about, all the while keeping some tension on the cable so that it doesn’t drag on the bottom and kick up sediment. We pull it in as the SeaEye comes back towards us or rises. Leo stays in the heat of the sun and supervises as students cycle through, learning the difference between the surge, the current, and the movements of the robot. 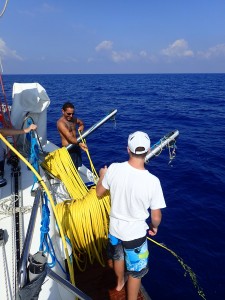 Leor shows his son how to tend the ROV’s cable (photo: Douglas Inglis)

It’s been two days of fruitless searching. Hauling the tether in and out, in and out.

I am daydreaming while staring at the reflections and the distant Tel Aviv coastline when I suddenly hear “A ship! A ship!” from the cabin. We look at each other. Leo nods his head to the cabin. “Go look if you want.” I shrug and abandon my post.

Everyone is crowded in the cabin. Megan, Holly, and Skipper Mike are watching the big screen TV mounted on the wall, and Veronica is logging the dive. Shelley is sitting next to Ishay, who is piloting the vehicle. There is barely room enough for us all. It’s hard to see details on the TV – there are too many reflections from the cabin windows, despite the drawn shades. Suddenly, a black wedge materializes out of the blue, and resolves into the side of a ship. It’s hard to have any perspective through the camera lens – at first I think it must be 3 or 4 meters tall before I get my bearings – it is much shorter, perhaps protruding only a meter above the soft sediment.

Ishay flies the ROV alongside. Someone points out that there is writing on side of the ship – though the scratch marks are covered with marine growth and completely unintelligible in the fuzzy video. We fly over the top, and can see that both ends meet in a sharp V, making it a small double-ended vessel. It is rather small, just a few meters long. Ishay maneuvers the ROV to the side, and letters come into focus: “TOLYA KOMAR”. 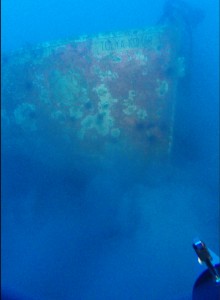 Screenshot from ROV investigation of target 5, a lifeboat from Tolya Komar

We are ecstatic. This is our first real find of the project. Megan whips out her cell phone and begins trying to identify the vessel. The internet provides a few tentative clues that we will have to investigate when we return to land. “Tolya Komar” is the name of a Russian cargo ship built in 1971. It is still in operation. We wonder, could this be a decommissioned lifeboat from that vessel? The small boat certainly looks in good condition… 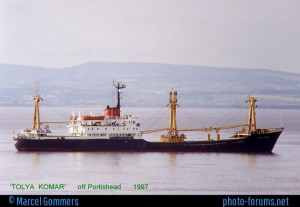 We recover the ROV and head to another target identified in the multibeam data. We drop anchor, and slip the ROV overboard. As soon as is settles 74 meters below, the SeaEye’s onboard sonar shows a very large object sitting on the seafloor just a few dozen meters from our position. Ishay engages the ROV’s thrusters, sending up a dense cloud of sediment. The ROV punches through the fog and skims over the barren landscape. He lands, checks the sonar display, corrects his heading and is off again. 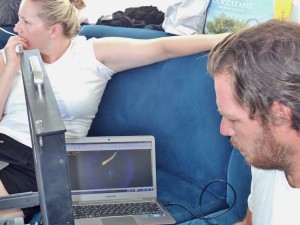 The side of a ship is visible on the sonar display. Holly and Ishay monitor the video feed (photo: Douglas Inglis)

Suddenly, a huge shape materialized out of the darkness. At first, it is only a shadow in the nearly black water. Ishay cuts the motors and lands the SeaEye. As he pans the onboard camera up, the water fades from black to blue, revealing the silhouette of a ship’s prow. We a give cheer in the cabin. The ROV takes off again, and approaches the hull.

Something is wrong with the silhouetted form. As the ship comes into range of the ROV lights, we see the problem – the ship is shrouded in a massive trawling net; there are ropes hanging everywhere. Ishay and Dr. Wachsmann look at each other, and simultaneously concluded “We have to get out of here!”

These nets are a serious danger. Our ROV has a very limited range of visibility, and there are numerous places on the hull that a stray line could ensure us. Worse, we do not have direct control over the umbilical. Either the current or our movements could easily push the dangling cable into the surrounding debris. We are in a very bad spot indeed. Leor hauls in the cable as Ishay slowly backs the ROV from the ship. It made me sad to leave her in the darkness without learning more, but at this stage, it is not worth risking the equipment and the rest of the field season. We have a lot of searching yet to do!

A big grin on his face, Leor prepares a feast to celebrate a successful morning. Two shipwrecks – before lunch! 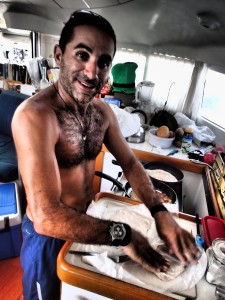