Warship Part I: A Menacing Silhouette…

We have a ship on sonar.

It can’t be anything else.

The mood on deck is tense as 186 meters below, the SeaEye Falcon ponderously moves towards a very, very large object.

Ishay examines the screen, trying to gauge the length of the anomaly. “It must be 60 to 80 meters long.”

Progress is agonizingly slow. We have to be cautious. The last ship we found was draped in nets and surrounded by loose line. At this depth, any entanglement would be catastrophic, possibly rendering the ROV unrecoverable. Leor is on the stern, carefully feeding out the ROV’s umbilical, keeping as much tension as possible to prevent snags. Ishay moves the ROV forward in five to ten meter bursts, landing each time to check the surroundings. Thirty meters out, we begin encountering debris. Some is obviously trash, plastic bags and the like. The currents have scoured a pit around a large unidentifiable metal object – we circle it with the ROV, but cannot tell what it is.

As we move closer, a long, narrow box comes into view. Is it some sort of chest or locker? We see loose line hanging nearby. 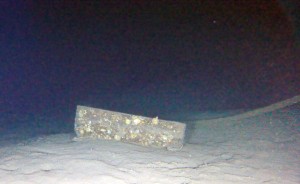 Some type of box or sea locker lying next to the ship.

A dark shadow fills the screen behind the box. Ishay slowly pans the SeaEye’s onboard camera upward to 50 or 60 degrees – the darkness ends abruptly, revealing the silhouette of a hull and railing against the blue. We’re in business!

Another burst of the thrusters and Ishay lands in a cloud of sediment. When it clears, the ROV’s lights illuminate a great, barnacle-encrusted metal hull, dripping with rusticles. To avoid obstructing Ishay’s line of site with Leor, I crawl in through the cabin door, beneath dangling cables, and sit below the big screen – my head craned back at an absurd angle to see. 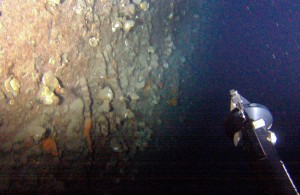 Rusticles drip along the sides of the hull.

Ishay moves right, panning along the side of the ship. The hull begins to curve and a large rudder comes into view. It is broad, and gently curves to the pivot point. It disappears into the mud, and the prop(s) is/are likewise buried. Mike speculates that perhaps it is a twin screw, but at our viewing angle, it is impossible to tell. As the camera pans upward, we can see the outline of a sweeping elliptical stern above. 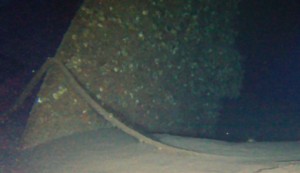 The rudder, buried in the mud.

The ROV begins to rise. Roughly six meters above the seafloor, we have a better view of the stern. A complex grid work of railing wraps around the end of the vessel. There is a dark silhouette in the center, barely visible in the gloom. Ishay pushes closer.

Is she right? We can see a long slender shaft, canted 30 degrees above horizontal. Is it gun? From my place on the floor, I suggest that perhaps it was the boom of a deck crane. Someone else suggests a toppled mast. Everyone in the cabin begins chattering. 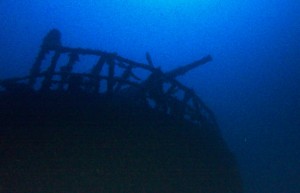 Our first glimpse of the stern gun, silhouetted against the blue.

We need to see more, but we need to be careful, and Ishay needs to concentrate.

“I am going to fly over the top of the ship.” 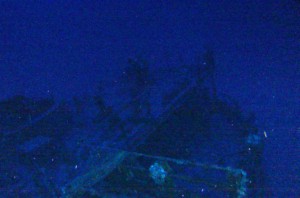 The ROV momentarily hangs in the current above the ship, before…

We watch in silence as the ROV backs away and rises. Ishay angles the camera downward. The view is unsteady. As we move over the top of the vessel, the ROV jerks about in the strong current. We catch aggravatingly erratic glimpses of the features below – Hatches? Mangled railing? Toppled poles? Fallen lines? Deck guns?

And then nothing. The screen is black, and the ROV is plunging powerless through the dark.