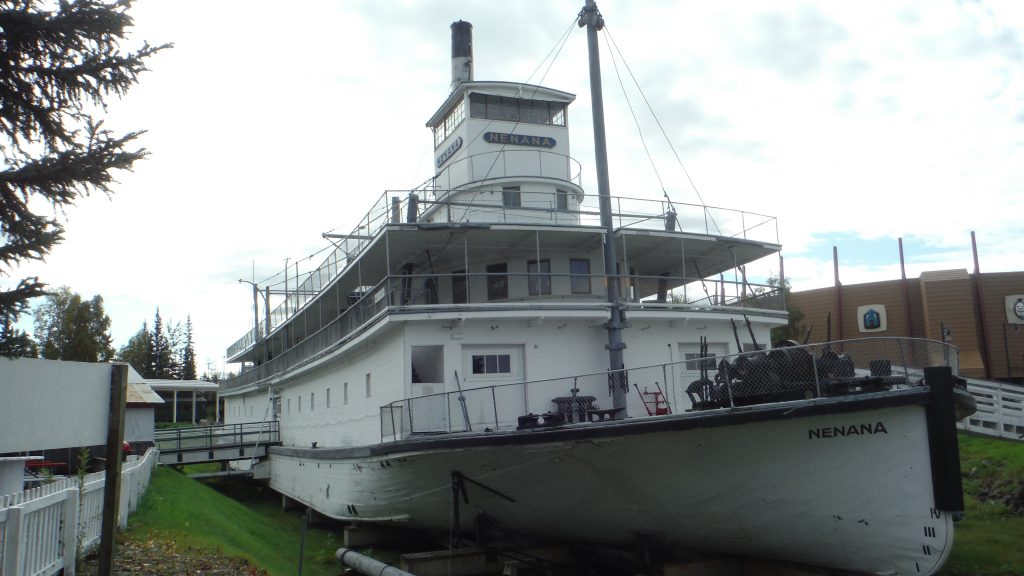 Heritage steamboat Nenana at Pioneer Park, Fairbanks, Alaska  (J. Pollack 2017)
Research Associate John Pollack has just returned from Alaska where with the assistance of City of Fairbanks staff a hull assessment was conducted of the heritage ship Nenana. The 210’ Nenana was one of the last and largest American-built stern-wheel steamboats to work on the lower Yukon and Tanana Rivers, where it served as a packet carrying up to 52 passengers and towing 6 barges at a time. The standard two-week route was a 1600 mile round trip to Marshall, with the occasional trip above the Arctic Circle to Fort Yukon. Nenana is the only known example of a northern wooden-hulled  sternwheeler designed by naval architect W.C. Wickum in 1932 and built from blueprints. The goal was to create a powerful, minimum draft tow boat suitable for the shallow, lower sections of the Yukon River drainage. The ship has a barge-like hull with standard chine construction, a rectangular cross-section amidships and a broad bow. The blocky hull is visibly less sophisticated than the streamlined Klondike 2 which carried freight cargo on the main deck, and towed only a single barge through the more constricted and meandering sections of the upper Yukon drainage. Another significant difference from Klondike 2, was the use of very few water-tight bulkheads on Nenana. 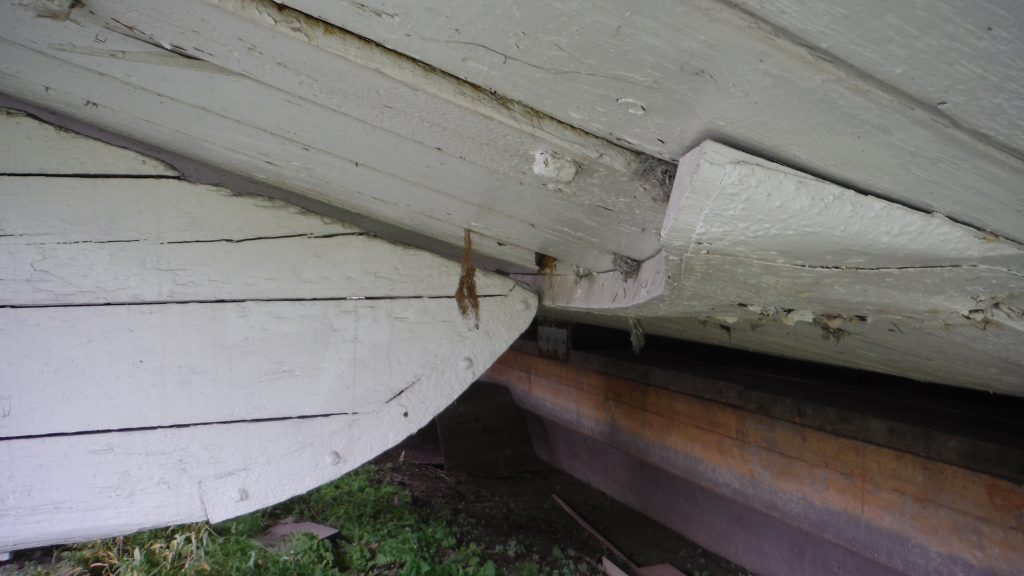 A snag deflector arc in front of one of the four main rudders (J. Pollack 2017)
Several rare examples of hull architecture and machinery were documented, including novel snag deflector arcs designed to keep debris away from the four main rudders, an uncommon slaved tiller assembly placed just inches above the main deck, and the largest number of large transverse beams yet found in a Yukon River steamer. Nenana also contained the second known example of an internal hog post and chain system installed below the main deck, and used to correct hull weakness (e.g. hogging) in the original design. Additionally, the team discovered a truly unique and baffling framing method at the stern rake (or apron), where an upper set of floors (complete with limber holes) was installed above the centerline and side keelsons, which in turn rests upon the lower floors to which the hull planking is spiked. These elevated floors are not shown in the blueprints, suggesting they were an “on-the-fly” alternation made by the shipwrights when the prefabricated hull was assembled in Nenana, Alaska. 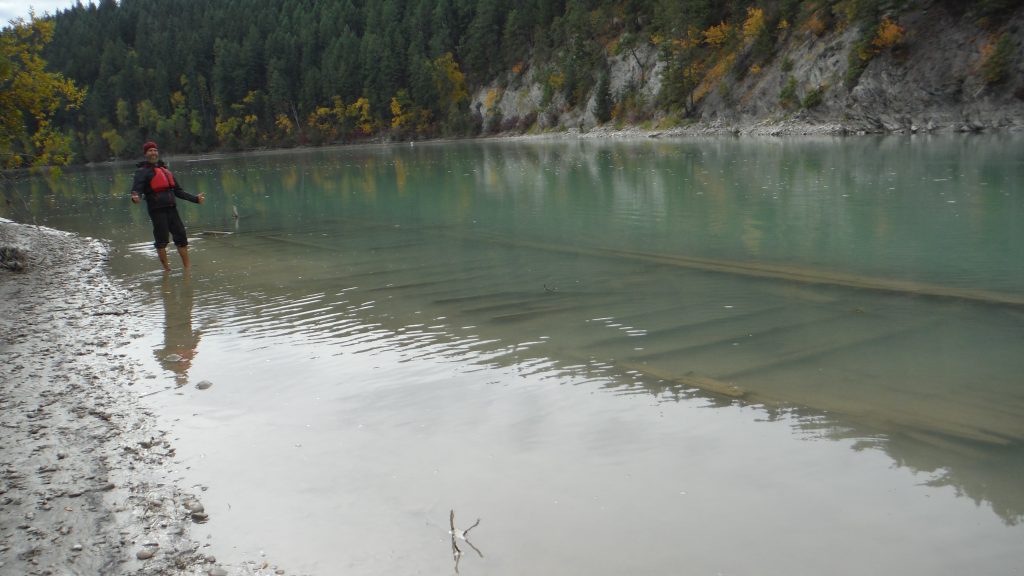 Largest shipwreck at the Golden site
In late September, three additional small stern-wheel steamboat sites were confirmed on the Upper Columbia River between Fairmont and Golden BC, by Danish-Canadian archaeologist Xenius Nielsen and Research Associate John Pollack. The Fairmont site lies a kilometer north of the source of the Columbia River at a point where the river is less than 15 m wide. The Golden sites are 100 km further north (downriver), and plans are being made to document the largest of the three during low water in the spring of 2018. Note the fresh grizzly bear tracks in the mud. 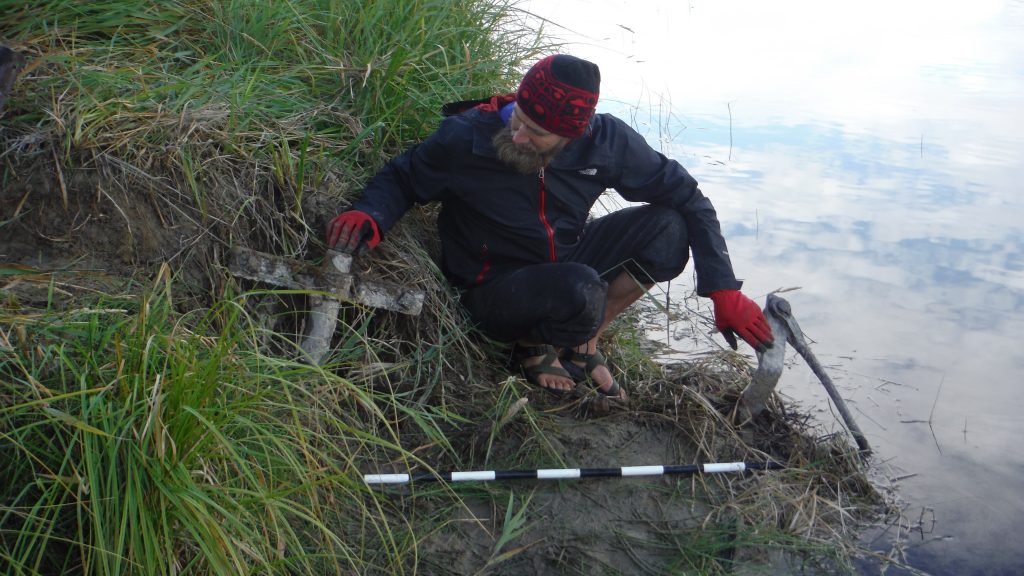 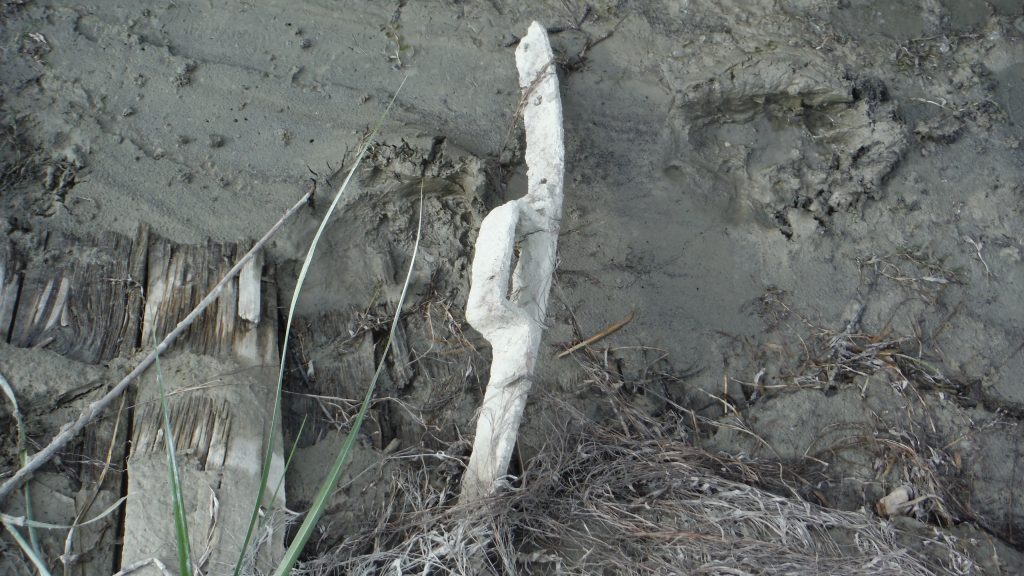 Grizzly bear footprints adjacent to paddlewheel fitting at a second site in Golden, BC