The 2014 field season of the Godavaya Ancient Shipwreck Excavation faced many challenges in turbulent and unpredictable sea conditions. The team, led by project director Deborah Carlson, surveyed in all four cardinal directions from the concretion pile to gain a clearer understanding of the scope of the site and clues to site formation processes. Nitrox was used during the excavation which drastically increased bottom times, allowing each diver 47 minutes per day to work in their excavation unit. Three dive teams twice a day were deployed from the project’s working platform, the Sea Horse to work on the site.

During the 2014 season, several exciting finds were recovered from the Godavaya wreck site, including a small blue glass disc and a metal (likely bronze) spearhead.  Refined glass ingots were recovered during previous explorations of the site, but the small blue glass disc represents the first glass artifact that appears in a finished state.  Weapons are of course not uncommon on shipwreck sites, but the presence of a spearhead will certainly add to the understanding and interpretation of this ancient ship’s purpose and cargo.

Keep a lookout for the INAQ issue 42.2, where more details about this dynamic site will be revealed, or visit the Godavaya Ancient Shipwreck Excavation project page to learn more now. 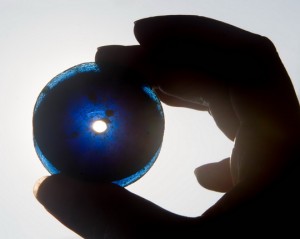 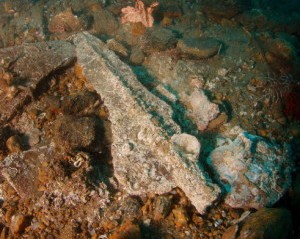