In Spain, INA Research Associate Miguel San Claudio is leading the exploration of San Giacomo di Galizia, the only 16th-century Spanish warship that has survived to date. This galleon was part of Philip II’s Armada during the late 16th century and the hostilities with Queen Elizabeth of England and Ireland. At 1,200 tons and with a length of 34 meters, it was also one of the largest ships of its time. While trying to reach the British Isles in 1597, the Spanish Armada was dispersed by strong winds. The San Giacomo di Galizia sank in the Ribadeo estuary shortly after; the crew escaped their pursuing enemies. In 2011 this important archaeological site was discovered and recorded. Various investigations have been conducted, including sampling of the wood and ballast stones, which established that the ship was constructed near Mt. Vesuvius, in the Bay of Naples, Italy, about 1590.

With the support of INA, the 2019 team aims to measure the depth of sediment burying the wreck and to determine the construction methods amidships, in the vicinity of the mainmast. In addition, work will be carried out to protect the wreck and to prevent further damage. The 2019 campaign, held between June 3 and June 21, will involve researchers from Centro de Ciencias Humanas y Sociales (CCHS); del Consejo Superior de Investigaciones Científicas (CSIC); University of Wales Trinity Saint David (UWTSD); Texas A&M University; Maritime Archaeology Ltd. (MALtd), and Universidade Nova de Lisboa. In addition to INA funding, the team benefits from the support of the Spanish Navy, the Department of Culture of the Xunta de Galicia, and a collaboration of local groups and residents of Ribadeo. 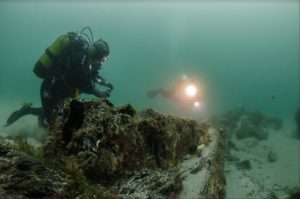 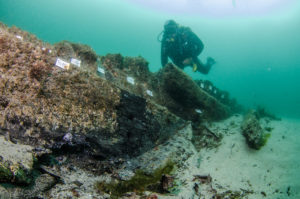