Another day of fine diving allowed the team to relocate the EBT9 anchor site, which was reburied after last year’s excavation and documentation. After planting a victory flag at the site (actually a dive buoy), we moved on to investigate site EBT1 (19th century wreck discovered in 2012). One of the goals this year is to record this enormous, scattered, discontinous wreck, in order to create a site plan for interpretation. We easily relocated the site, set a 100 m baseline, and began recording the wreck.  We discovered an iron knee and other ship components buried shallowly in the sand, and set out to record as much as we could with the available daylight. One object, shaped like half of a rectangle, was unburied, measured, and sketched, but still remains an enigma to us. Perhaps part of a hatch coaming is one guess at this point… One of our goals tomorrow will be to continue recording new features of this site and documenting them for inclusion in the site plan. 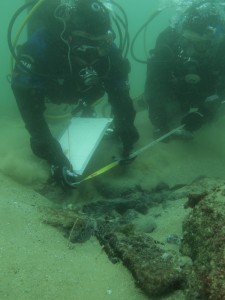 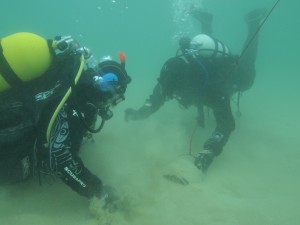