Report from the field…

Although we lost days and days due to the sinking of our boat, bad weather and politics… we had a phenomenal season. Not only are we certain that we have found one of the Dutch ships of 1677, but—I will go on a limb a bit here—we are 85% certain that this is Huis de Kruiningen of 56 guns, built in 1653 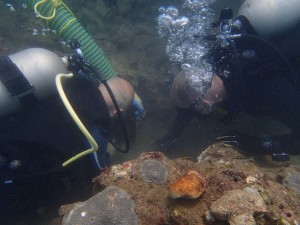 She was the largest Dutch ship at the battle and went down fighting against very heavy odds indeed. Alas, no coherent hull structure has emerged, but the finds have been phenomenal. It began with a small bellarmine jar, then a small delftware jar of unclear type or use, then loads of smoking pipes, then fragments of two more bellarmine jars and other pottery. The other day we found about 7 lead shot, of three different calibers. None was ever fired. Yesterday came one of the most spectacular finds, a complete pottery jar, fairly large with three escutcheons on it. They apparently show the Great Generals — Alexander the Great in the middle, flanked by Joshua on the right and David on his left.

All in all, we could not be happier with the finds. We really have accomplished what we set out to accomplish.