Alcohol vs. Water: There is No Contest For 17th Century Sailors

I came into this project somewhat blind as this is my first experience in scholarly research. However, being interested in health care and a lover of history, this project jumped out at me. My domain for this project is to discover what the beverages of sailors would have been in the 17th century. This is something that is particularly interesting because at first assumption we believe that the men would have had to stay properly hydrated for the long hard journeys at sea. This is true, but if you think back to every movie about sailors or seamen from the past, the characters were portrayed as drunks. This is largely due to the fact that sailors held alcoholic beverages as their holy grail and seemed to not give regular plain water a second glance. 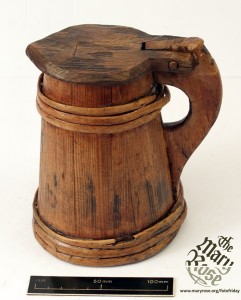 Wooden tankard with lid (81A3915) from Mary Rose. http://www.maryrose.org/3d-artefacts/wooden-tankard-with-lid/

One interesting quote, although written a few centuries after the period we’re focusing on, clearly paints the picture. “…Left Boston on August 23 [1779] with 48,600 gallons of fresh water, 79,400 gallons of rum. Made it to Jamaica October 6th and brought 68,300 gallons of rum aboard. Landed in the Azores on November 12th and was given 64,300 gallons of Portuguese wine. Looted wine from ships on the route to England. Looted a whisky distillery and stole 40,000 gallons. Returned to the Boston Harbor on February 20th with ‘no cannon shot, no powder, no food, no rum, no whisky, but with 48,600 gallons of stagnant water.’”

I have tried to rationalize this for weeks, in order to wrap my mind around the fact that for hydration, the sailors drank alcohol, not water. As someone who drinks a lot of water, it is hard to imagine only drinking alcohol for not just days but months. This is intriguing because an alcohol liquid diet combined with a salt heavy diet, one would think, would equate to extreme and detrimental dehydration. To further explore this topic, it is important to know exactly why the sailors made alcoholic beverages the drink of choice. First off, sailors were typically rationed about a gallon of beer per day. Beer is rich in vitamins, particularly B vitamins, and more importantly carbohydrates. This is largely the reason it was considered a staple in the diet aboard ships, often called “liquid bread,” in many accounts. Beer and other distillates on ships would not have been as high in alcohol content compared to today’s standard and were often diluted with water. Furthermore, it is imperative to remember that plain water was often considered a cause of many communicable diseases in this time as the people had not been blessed with the invention of Brita quite yet. The true reason alcohol was cleaner, was likely because water for drinking was not boiled, whereas the alcohol-making process typically involved boiling. Lastly, one of the most interesting facets of my research has been looking into the medicinal effects of mixing alcohol and water for the sailors. The alcoholic properties could kill some dangerous microbes present in the water and could have acted as a sort of purifying agent. This might have also helped prolong the water’s shelf life that was brought on board. All in all, for the sailors of this period distillates may have had the greater advantage over water. 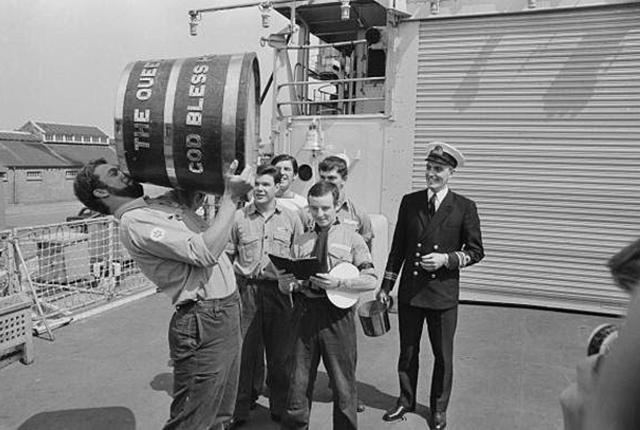 The end of a Royal Navy tradition, as the daily ration of rum is abolished due to safety concerns, 31st July 1970. Cook Thomas McKenzie drains the last drop from the barrel at the Royal Naval Dockyard in Chatham, Kent. (Photo by Leonard Burt/Central Press/Hulton Archive/Getty Images)