By Grace TsaiFebruary 6, 2017No Comments

In July 2016, I traveled to Italy on vacation to visit friends who live in the Dolomites, near the border of Austria. One night, while discussing the Sea Biscuit & Salted Beef Project over a digestivo (digestif) of homemade grappa, I began to vent my frustration on the difficulty of deciphering what exactly aqua vitae (also spelled acquavite and acqua vitae), a type of strong alcoholic drink, was.

With a cheeky grin, my friend Alessia’s father, Andrea, chuckled and said “What do you mean you don’t know what aqua vitae is? You’ve been drinking it after dinner the past week!” He walked over to the liquor cabinet and pulled out a bottle of grappa they had bought from the store that had ‘acquavite’ printed across the front of the bottle in smaller font under the company logo. 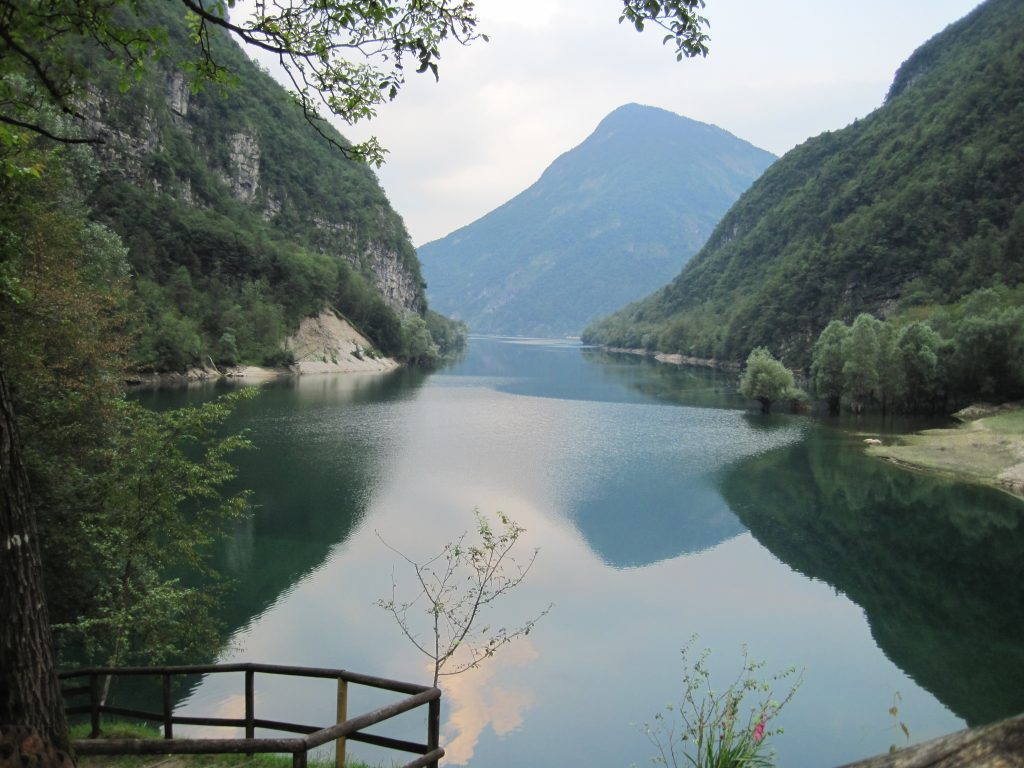 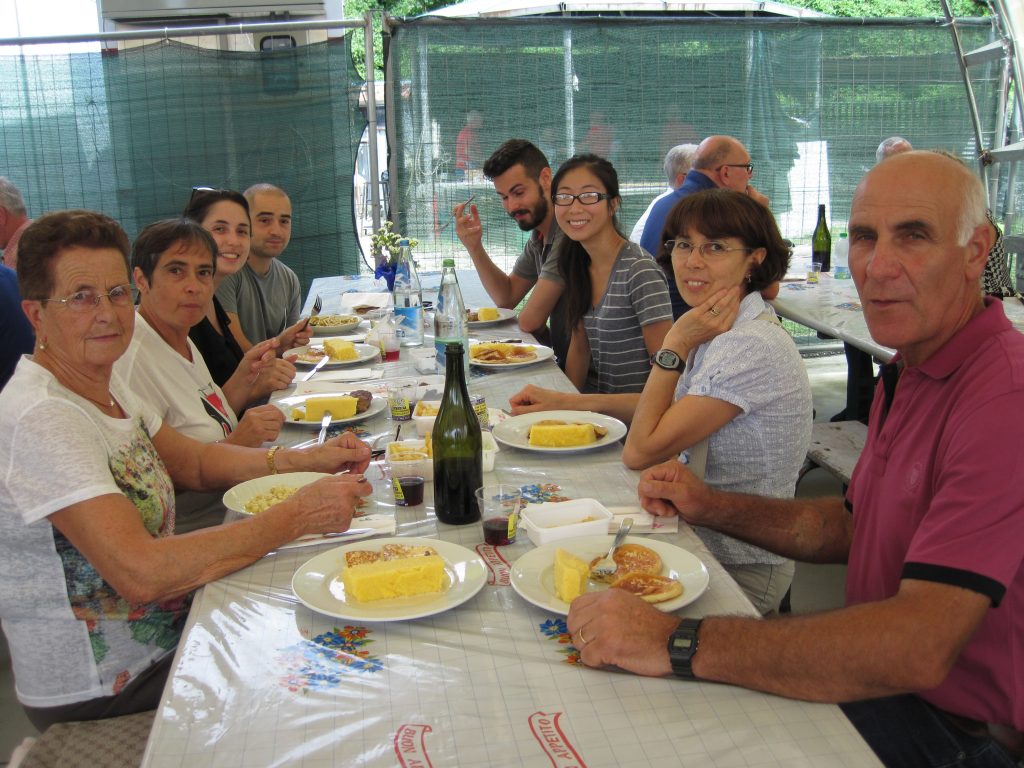 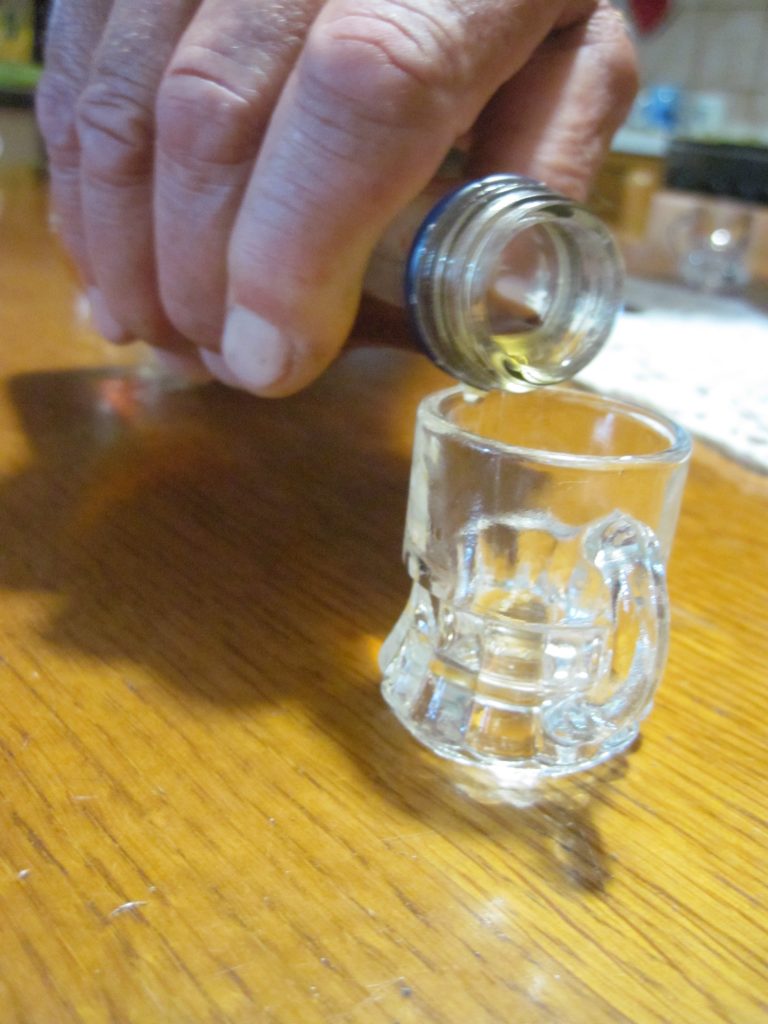 Some homemade grappa after dinner.

The next day on our way back to Padova by train, my friend Alessia decided to surprise me by bringing me to Poli Museo della Grappa, a grappa distillery and museum founded in 1898 located in the city of Bassano del Grappa. Within the museum were antique stills (alembic) for distillation, and very informative and interactive exhibits on the history of distillates from past to present. The museum trip cleared up some confusion–we found out that any kind of distillate could be called aqua vitae, which would explain my conundrum with identifying the exact spirit it was and its ingredients. Aqua vitae was a type of drink, rather than a specific beverage; similar to juice being a type of beverage describing the extracted liquid from a fruit or vegetable, rather than the name of a specific drink itself, such as grape or orange juice. 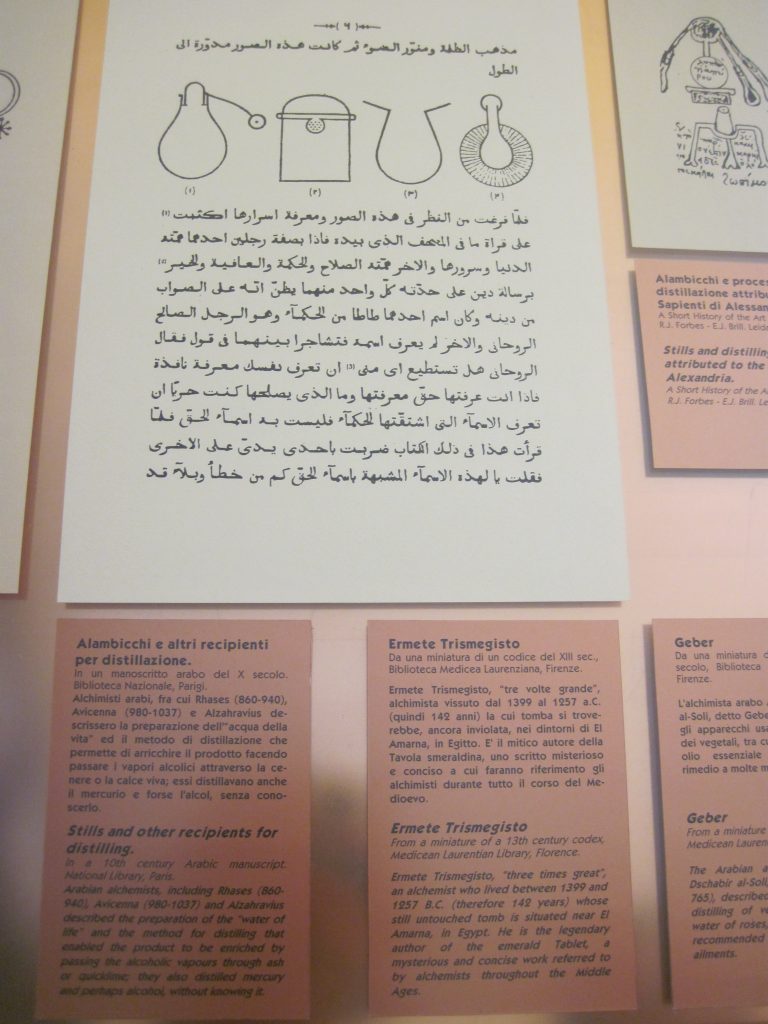 A plaque explaining the history of aqua vite in the Poli Museo. 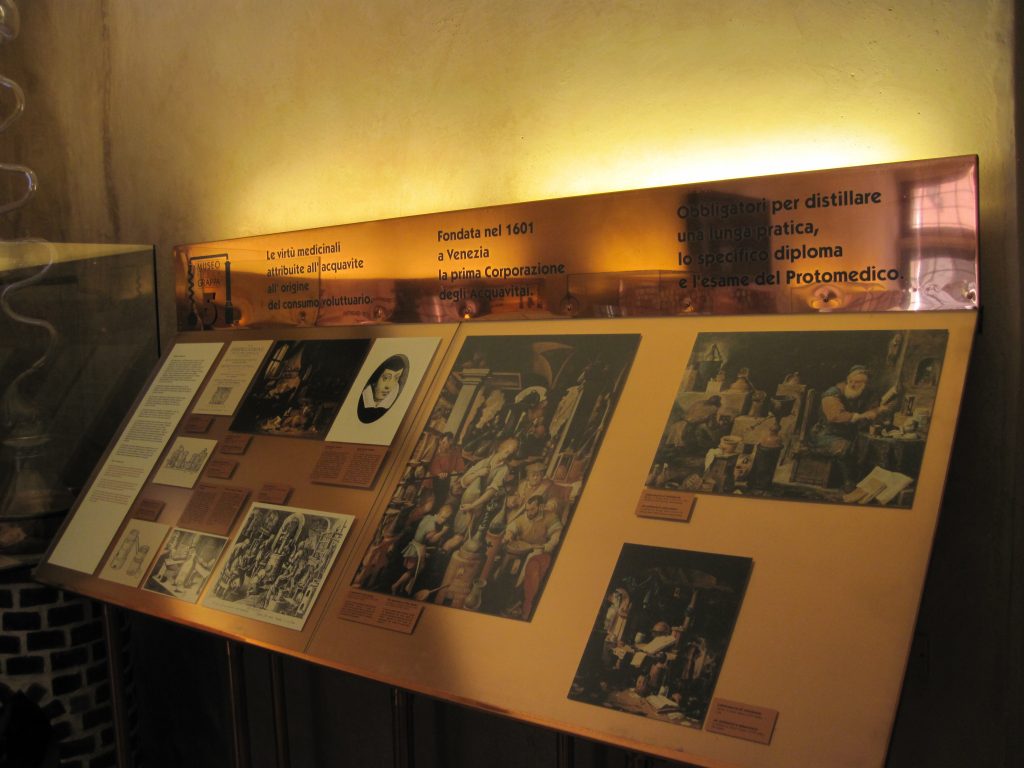 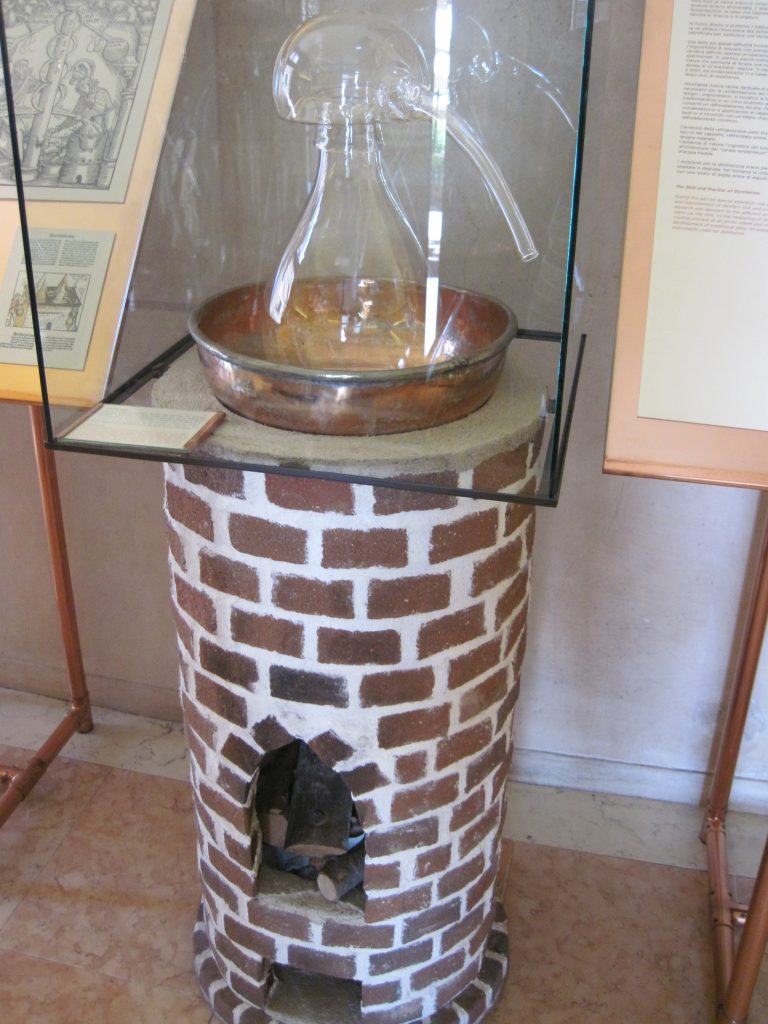 A still, or alembic.

This week’s blog post is by Holden Diserens, who provides an abridged history on aqua vitae.

The use of alcohol to make water potable has been a common historical practice. While the science behind how alcohol made the water drinkable was not understood until around the mid-nineteenth century, the practice has been around since the creation of alcohol itself. One of these such beverages was “Aqua Vitae” or “water of life.”

During great sicknesses and plagues doctors would prescribe very strong alcoholic beverages, such as brandy, to try and kill whatever was “evil” inside of them. One example of the “healing power” of alcohol from the medieval period was a quote from an English philosopher named Roger Bacon, “Preserve the stomach, strengthen the natural heat, help digestion, defend the body from corruption, concoct the food till it be turned into very blood.” Their understanding of what the alcohol did was simple, but it still had a great impact on many lives, especially later in the British Navy.

The most common way of making this beverage was by distilling wine, or fermented fruit, using an alembic still to make it an even stronger alcohol. The alembic worked by evaporating any substance with alcohol in it and collecting the resulting condensation. As alcohol evaporates at a much lower temperature than water, it is easier to get a much stronger alcohol by using the alembic still multiple times until the desired strength is achieved. After the wine or other alcoholic beverage is distilled multiple times, the resulting liquid is clear and potent Aqua Vitae.

Distillation appears to have been perfected by the Arabs. Abulcasis was a physician who lived in Cordoba (which at the time was controlled by the Caliphate of Cordoba) around the 10th or 11th Century AD. Considered the father of modern surgery, he is credited with being one of the first professionals to use Aqua Vitae in medicine. Cathar missionaries who lived in the Balkans brought the practice of using alcoholic alchemy into Europe and the Christian world from the Muslim world. The Catholic Church soon instructed their monasteries to start brewing this “water of life.”

Fast forward to the 18th century, and the British were issuing this drink to their sailors on a bi-daily basis. At first it was used as a way to boost the moral of the men while they were on long voyages, but later, Admiral Edward Vernon (later dubbed Old Grog by his men) made the rum ration standard issue in the Navy. The men were instructed to dilute the rum in water then add some lime or lemon juice (a concoction called “Grog”). As far as health purposes, this was a decent practice. The water was drinkable, moral boosting, and contained Vitamin C, which helped with ailments including scurvy. This practice was not abolished in the British Navy until 1970, and later abandoned in the Royal New Zealand Navy in 1990. 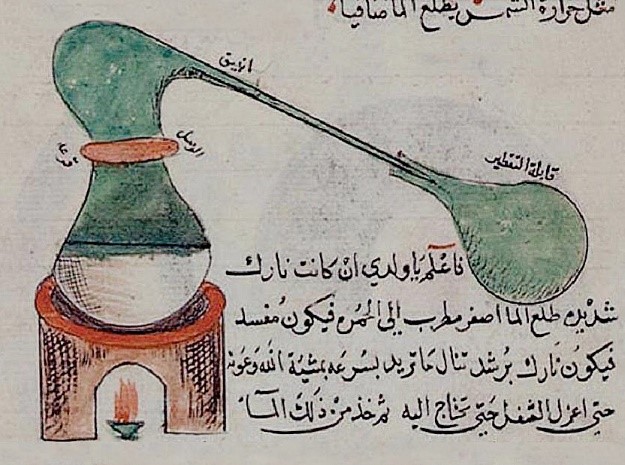 Illustration of an alembic. 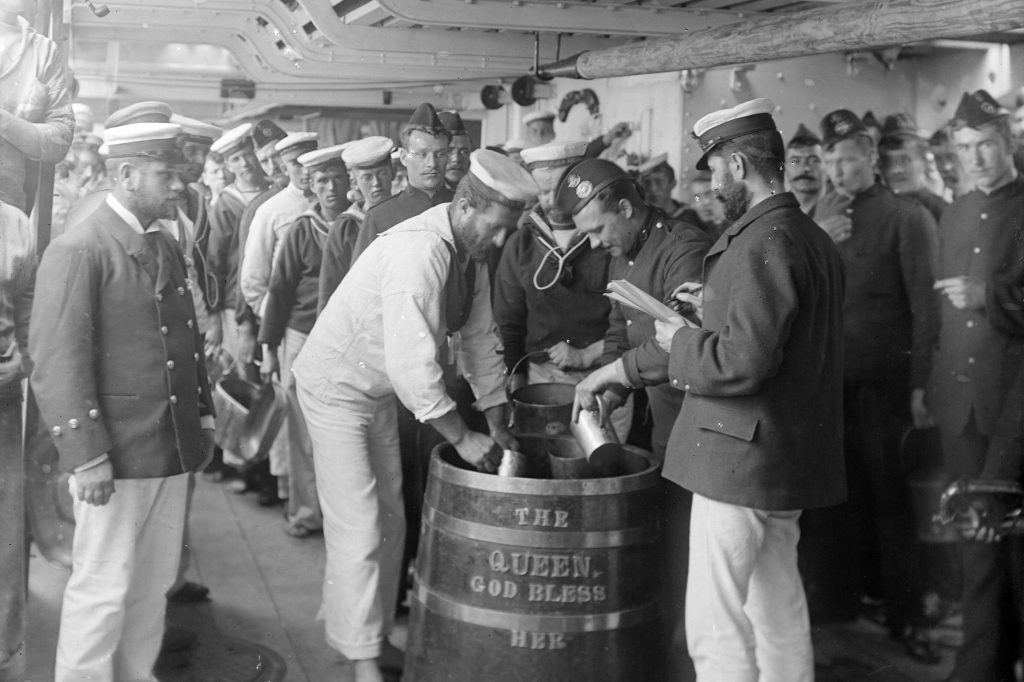 Circa 1897: Sailors serving out grog on board the HMS Repulse. (Photo by Reinhold Thiele/Thiele/Getty Images)