By Grace TsaiFebruary 28, 2018No Comments

The Ship Biscuit & Salted Beef Research Project has FINISHED collecting beer samples. Because I live in Galveston and near the water, the beer was actually stored in my shed. Though some may say that a shed is a “rather interesting” choice for beer storage, this location was chosen because it closely mimics the conditions of 17th-century ships–it is near the water, dark, not temperature-controlled, and dank.

Now, I know that no one enjoys organic chemistry, but it is actually really important in terms of beer brewing. The presence of certain functional groups can impact the overall flavor and content of the beer. For example the presence of isobutyraldehyde can give the beer a “musky” taste. Furthermore, the presence of alcohol groups (our favorite) can dramatically increase the alcohol content of the beer. To read more about the way in which certain functional groups can impact beer flavors, visit: https://learn.kegerator.com/off-flavors-in-beer/

The results of our sampling were pretty interesting. The first sample collected indicated the presence of pyrazine, ketone, and furan functional groups (along with esters, benzene, aldehydes, alcohols, and acids). However, the pyrazine, ketone, and furan functional groups were present in significantly less amounts at the end of the sample collection. It is possible that some of the ketones were reduced to alcohol. This would explain the increase in alcohol concentration. YAY!

Finally, I would be remiss without mentioning the interesting mold that grew beneath the barrel. Though the exact cause of the mold is still unknown, it is likely that it was just caused by the dramatic fluctuations in temperature and the torrential downpour that plagued Galveston for weeks, which caused the yeast to ferment more, increasing pressure in the barrel, and thus making some beer to leak out. 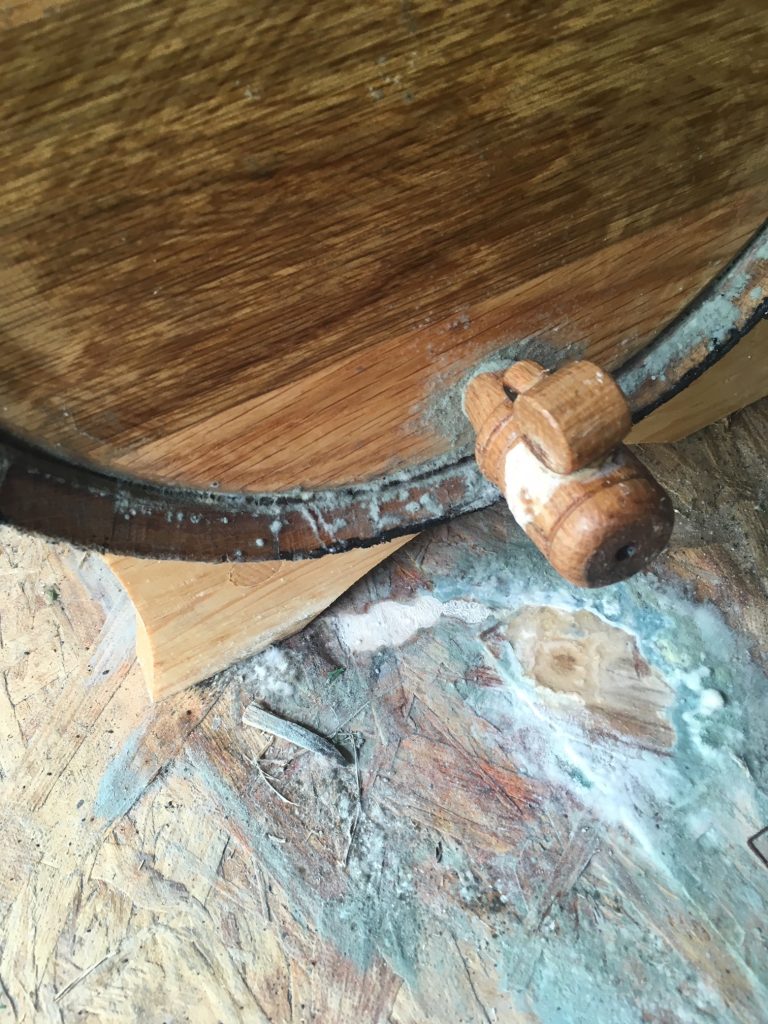 Moldy beer barrel at the end of the experiment.