By Grace TsaiNovember 17, 2019No Comments 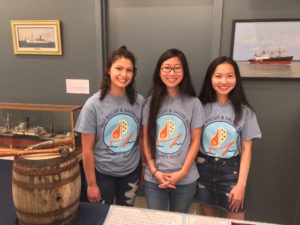 Hi, I am Thuy! I am a new member of the research team! I did not know too much about the research at hand but thanks to my team leader, Grace, I had the opportunity to go to the Houston Maritime Museum to actually smell the meat sample, see the barrel that they used to recreate what the sailors ate, and look at the bay salt- the star of the show! Moreover, Grace shed light on the entirety of the project and explained the research process in analyzing foods preserved using 17th-century methods. The fun part was that I got to present what she taught me to people who came to the museum. Although I felt anxious at first, it got easier over time! It was one of the most productive things that I have ever done. 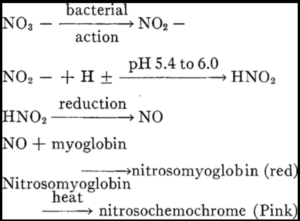 What did I learn exactly during the Museum trip? Let’s start with the star of the show: bay salt. What is bay salt? Bay salt is salt made in salines or shallow clay pans that are filled with saltwater and allowed to evaporate by the sun until the brine crystallized into salt. Besides bay salt, we also used rock salt, which was mined from the ground, and sea salt, which was the salt crystals that were formed by boiling seawater. Because bay salt was a recurring ingredient in multiple sailors’ diaries, we decided to choose bay salt as the focus of the research. Some might say it was because bay salt was cheap though, in reality, it was not the cheapest in the respective time period. Therefore, money was not the sole reason. What was the real reason? Why did people keep using bay salt? It is said to be gross, includes lots of impurities, tastes horrible, and so forth. The answer could be found in our nitrate, nitrite, ammonia assays. It is interesting to observe that none of the salts had detectable ammonia, but all contained a small amount of nitrate. The nitrite was undetectable in all salt samples except for the Galveston sea salt. However, after the experiment, an abnormal value of nitrate and nitrite were found in the meats and brine that is much greater than the fresh meat and the salt by itself. The reason for this is because we hypothesize that the bacteria in bay salt produce nitrite and nitrate. Thus, because nitrate and nitrite are very helpful in meat preservation, people kept using it as an ingredient in the 17th century. Back then, people did not know the safety limits or long term effects of having too much of nitrate and nitrite. All that was taken into consideration was the amount of time the meat could be preserved.

The museum visit was a great and memorable experience! We hope to participate in many more museum talks in the future!