How did diet effect sailor health?: A hypothesis

I have been assigned the task of researching the effects vitamin D had on health of 16th and 17th century sailors. Osteological remains during this time period suggest sailors suffered from many bone diseases caused by a vitamin D deficiency. As most people know, our bodies synthesize vitamin D upon exposure to UVB rays. Assuming sailors were exposed to more than average levels of sunlight in their environment, I analyzed different factors within the diet that may have contributed to the vitamin D deficiency suggested by the osteological remains.

Before I go into depth on the factors effecting the function of vitamin D, I wanted to provide some background information on vitamin D. Vitamin D is a unique vitamin in that it can be obtained from our diet or synthesized within our skin upon exposure to UV rays, and then further becomes activated into a hormone through a series of processes that occur in the liver and kidneys. Yes, vitamin D is considered a hormone! The activated, or hormonal, form of vitamin D is responsible for many processes such as mobilizing calcium throughout the body, particularly for developing bone, and increasing calcium absorption in the small intestine.

This figure displays the activation of Vitamin D through the liver and kidneys. (Precision Nutrition, 2015)

Enamel hypoplasia, osteoporosis, and osteomalacia (adult rickets) are some of the bone diseases prevalent among sailors during this time and point to a vitamin D deficiency. However, it is unlikely that the lack of vitamin D was the only cause for what is seen in the osteological remains. Rather, other nutritional factors such as a vitamin C or calcium deficiency could have played a role as well. Vitamin C is important for the development of normal bone and cartilage, and acts as a cofactor in several enzymatic reactions, including collagen production. Scurvy, a common disease caused by a vitamin C deficient diet, was prevalent among sailors during the 16th century supporting that the bone attrition seen on osteological remains could likely be caused by vitamin C deficiency as well. 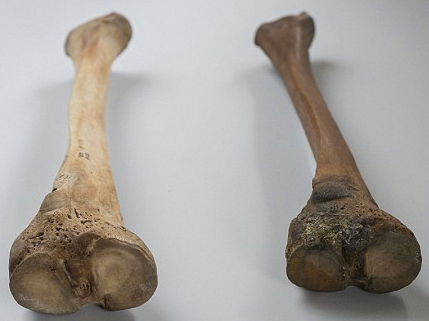 Osteomalacia of the tibia bones of sailors who sailed on Henry VIII’s Mary Rose, which sank in 1545. The deformations in the abnormal bones can be attributed to a poor diet low in Vitamin D and Vitamin C. (Daily Mail, 2014)

Assuming sailors did most of their work outside and were exposed to a large amount of sunlight, why is there speculation of a vitamin D deficiency? Research has shown sailors’ diets consisted of foods with little to no vitamin D or calcium which negatively affected absorption, excretion, and activity of vitamin D, leading to bone malformations. In addition, sailors consumed a high sodium and high alcohol diet which negatively affect normal bone formation. A high sodium diet increases calcium excretion in the urine, causing bone diseases, by reducing proximal tubular reabsorption. Excess sodium intake has also been correlated to an increased bone resorption marker. Consuming too much alcohol can suppress the function of the parathyroid hormone, a secretion from the thyroid gland responsible for enabling the kidneys to activate vitamin D into its hormonal form. This can lead to a decrease in circulating calcium which is important for normal bone development. In addition, excess alcohol consumption leads to liver damage which may decrease the supply of vitamin-D binding proteins and reduce the livers ability to activate vitamin D. 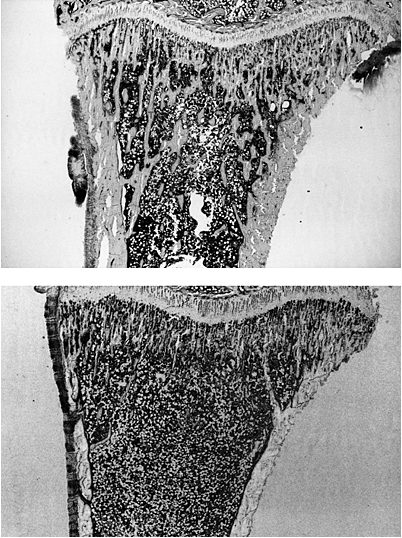 This figure displays normal bone (top) and alcohol treated bone (bottom). The lighter colored specules in the top picture are not present in the bottom picture. This is because alcohol-affected bone has more compact cortical bone and less cancellous bone. (PubMed, 2002)

In conclusion, I suspect a high sodium and high alcohol diet combined with low vitamin D and calcium consumption is responsible for the bone attrition seen among the osteological remains of sailors. If I was in their shoes to do anything differently, I would vastly increase my water intake and try to decrease my salt intake. However, salt was necessary to prevent bacterial growth on food which could potentially lead to other illnesses I would much rather prevent! I am interested in learning more about other factors that may have impacted bone diseases during this time period. I am hoping to start more research on vitamin C to potentially determine other nutritional factors that may have accounted for its deficiency!