Earlier this month our research team members presented our two posters at LAUNCH, an Aggie Research Scholars event where students have the opportunity to showcase the research they have conducted.

This semester, our team split up to present two different posters.

“Shake it like a Salt Shaker: Unique Characteristics of Bay Salt in Historical Contexts” was presented by Alyssa Shewmaker and Thuy Nguyen.
“Health Effects of Volatile Compounds in 17th century Salted Beef Replica” was presented by Somer Smith, Matthew Magno, and Daisy Abraham

The posters were complementary to one another and allowed the audience to gain a better understanding of the different aspects of the research we were performing. For the first poster, Alyssa and Thuy discussed our findings of nitrifying and denitrifying bacteria found in the salt that had the potential to produce a desirable red color in the meat. They also discussed our next steps to investigate how pollution may have affected the bay salt’s makeup and its preservative qualities. More research on salt and the fascination behind it! 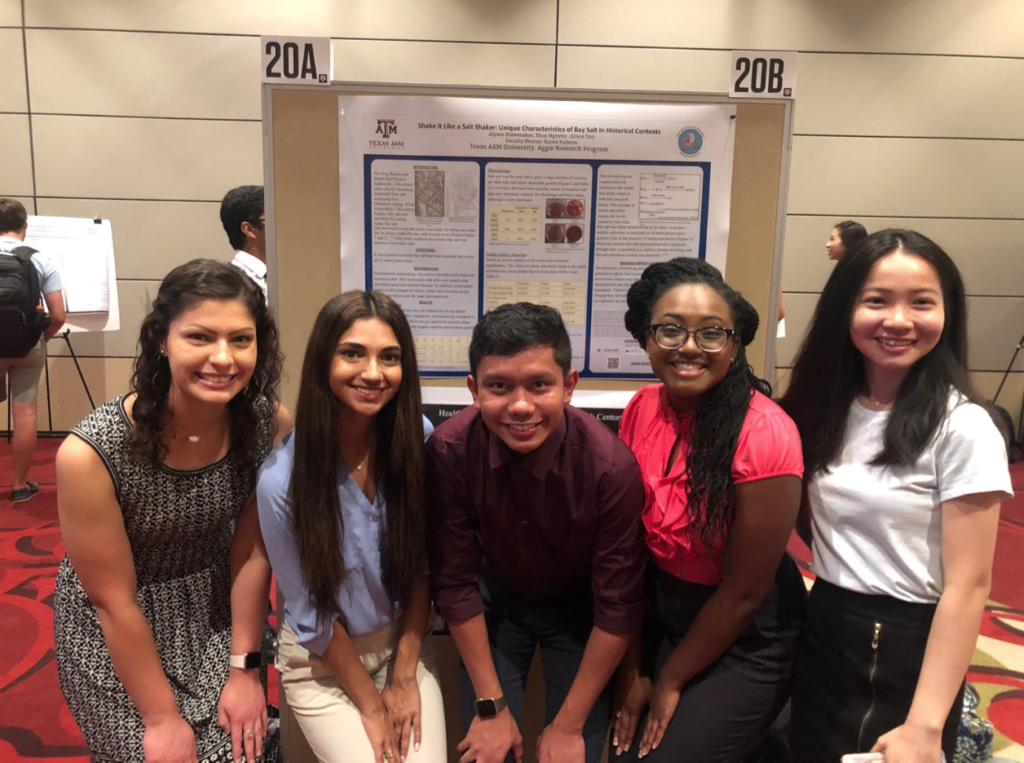 Following, Somer, Matthew, and I presented our findings over the health effects of the volatile compounds produced during the process of lipid oxidation. We explained to our audience that although the sailors preserved the meat, it still became rancid during the voyage, and a measure of this was lipid oxidation which produced certain compounds that we were able to measure using the process of GC/MS. After analyzing the health effects of the compounds produced from our sample meat and calculating the amount that a sailor would consume in his average diet, we concluded that the compounds in that quantity would not have a deleterious effect on the health of the sailors. In fact, most of the compounds produced are used as flavoring ingredients today in small amounts.

Overall, our team enjoyed the experience of compiling and presenting our findings. We all were also able to grow as a group while we learned to build upon each other’s ideas and explanations throughout the process. Stay tuned with our updates to SEA more news in the future!