As many of our followers have perhaps noticed, the Ship Biscuit & Salted Beef Research Project is part of the Aggie Research Scholars Program (ARS), Texas A&M University’s largest research program. The ARS program follows the Research-Intensive Community model developed at Texas A&M University that brings together graduate students and postdoctoral fellows, who serve as team leaders to cultivate research and education for undergraduates seeking research opportunities. Last semester, we had 6 students in our ARS team, many who have now successfully graduated and moved on to pursue further education. This Summer we have several new members who are excited to learn how to conduct research and contribute their knowledge to the project. 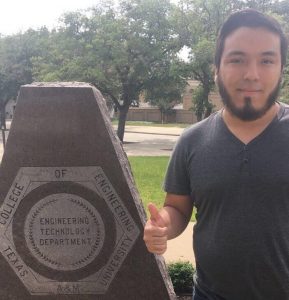 Rogelio Casas was born in Rio Grande City, Texas and moved to Laredo, Texas for most his life. In high school, Rogelio (or Roger as most people call him) joined the ULTIMATE Robotics team and ended up leading the team in his junior and senior year. With that experience in high school, he knew he wanted to be involved in electronics and wanted to have a more hands-on experience in college and he would be the first family member to go to college. After being accepted to the engineering department at Texas A&M University, he found out about Electronic Systems Engineering Technology (ESET for short) and after taking a semester of their classes, he knew this was the major he wanted back in high school. 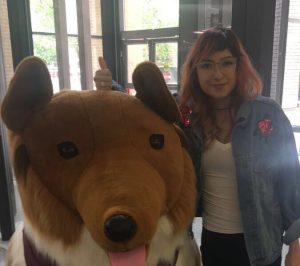 Erika Davila was born in Laredo, Texas where she spent most of her early life. She often spent her summers in Chicago, Illinois or Monterrey, Nuevo Leon, Mexico to spend time with her family. As a first-generation college student, navigating through college was difficult and finding the perfect major was hard. She knew she enjoyed molecular biology and genetics, but wanted to study somewhere it could be applied to. She found entomology, where she can apply her passions into the study of insects. Since insects have a significant impact on agriculture, various research is done to reduce pests and study the resistances in their genetic make-up. Erika has participated in various research experiments such as working with the fire ant brain transcriptome, the fire ant response to Juvenile Hormone, and the effects of electron beam irradiation on psyllids and Candidatus Liberibacter solanacearum. Recently graduated, Erika works as an Integrated Pest Management Technician under Texas Agrilife Extension, hoping to gain more experience before making the next step to graduate school. 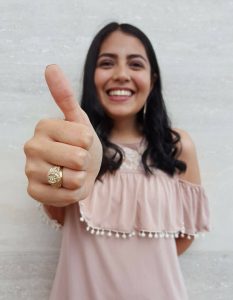 Interests: Listening to indie bands, hiking, going to coffee shops, watching movies, and binging on TV shows.  Anything giraffes and always admiring any and every song made by Coldplay

One Amazing Thing I’ve Seen or Done: I went on a sand dune buggy tour and sand dune surfed in Huacachina, Peru. They view was breathtaking and made you feel as small as the grains beneath your feet. One other thing I have done that amazes me, and can still not believe, is teach my un-teachable and overly energetic dog, Panchito, how to play fetch. I’d like to believe he’s an angsty teenager in doggy world and refuses to abide by standards.

Karen Galvan was born in a border town- Laredo, Texas. She is majoring in Nutritional Sciences and is hoping to pursue Physician Assistant School upon graduation. She dreams of dedicating years thereafter to working for nonprofit humanitarian aid organizations. Since before beginning her undergraduate years she has had a great passion and admiration for humanitarian work and was granted the privilege to live out that passion a year ago. She traveled to Lima, Peru with MedLife to help out in mobile medical clinics in 3 different communities and help finish a large development project for a community up in the hills in need of a staircase. From time to time, she also enjoys writing creative stories and has had a paper published in the Texas A&M Undergraduate Explorations Journal that was based on a real event that profoundly impacted her life. 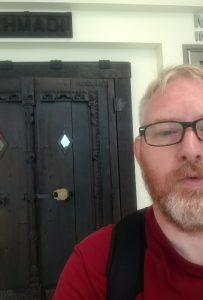 B.A. History with a minor in Museum Studies (WIP)

Favorite Book: Not so much a book but authors, Steve Berry, Dan Brown, James Becker, and Stephen Frey

In general my life is boring. I focus mainly on church, family, education, and work. My educational path has taken many detours just for me to arrive at this point in my life. This is why education is important to me and as a father to three daughters, I hope that I am a role model that they look toward for inspiration. By working one can achieve one’s goals that are never too far away, and it is important to never give up on those dreams no matter the hurdle. My wife and I enjoy the adventures of traveling, and getting to see new and wonderful places when we can afford it. If it supplies an educational experience, then that is just the topping, especially if there is a history aspect included with the adventure. I am a collector of souvenir shot glasses, it allows me to share our travel adventures with friends and guests that visit our home.

Favorite Book: The Heart and The Fist, Eric Greitens; The Hero With A Thousand Faces, Joseph Campbell
One Amazing Thing I’ve Seen or Done:

-My team led the assault to apprehend one of the most wanted terrorists in Al Anbar Provence, Iraq.

-I have won numerous dance competitions, but not for the style you would think or expect.

-I once drove from Galveston, TX to Prudhoe Bay, AK (furthest you can drive a personal vehicle in North America) on a whim.

Mike was born to a wayward Vietnam War vet and an empathetic medical insurance claims adjuster in Galveston, Texas is what was considered a winter hurricane of patriotism, classic rock, and cheap whiskey. Growing up as a shy, nerdy child with N’SYNC-inspired frosted tips and off-brand JNCO jeans, he read voraciously and became infatuated with, baseball, raising cattle, tales of pirates and the story of the Titanic, based solely on Kate Winslet’s performance in a movie based loosely on the historical tale.  In 2001, in the midst of having hammers thrown at him in welding class, Mike learned about the terrorist attacks and decided to enlist in the United States Marine Corps (best uniforms) as soon as he could convince his mother to sign the paperwork.  After nearly a decade of service throughout numerous continents and successful combat missions, Mike separated from the USMC to pursue … something…  He was a defense contractor in Afghanistan with Special Forces, a commercial salmon fisherman in Kodiak, Alaska, and a beast of burden at Karbach Brewing in Houston, Texas.  A snarky conversation about being a mermaid with an veteran’s support resources counselor at Texas A&M University led Mike to once again uproot his life and chase down the newest challenge – being a 30-something college freshman curmudgeon in pursuit of an eventual Master’s Degree in Nautical Archaeology. 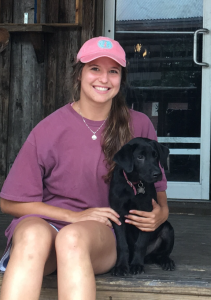 Interests: Dogs, riding horses, music, sleeping, and being outside

One Amazing Thing I’ve Done or Seen: I have seen my dog dive to the bottom of a 10-foot-deep pool for a ball

Although from Dallas, TX, Emily spent many weekends in College Station at Aggie football games. Both of her parents went to Texas A&M and graduated from veterinary school here. She plans to attend vet school at Texas A&M also, after finishing her undergraduate degree in food science. Emily has spent a week every summer for the past ten years on the Navajo Reservation with Christian Veterinary Missions helping with vaccinations and small surgeries for cats, dogs, horses, and sheep. She has a black lab named Dale who will retrieve any object that is thrown for him, and a horse named Fred. Her hobbies are riding horses, playing polo, listening to old country music, and running. While helping with this project, she hopes to learn more about the type of food brought onto 17th century ships, how these were preserved and how the environment affected the nutritional value of these foods.