Salazar’s Lament: Where He Hates on Salted Beef 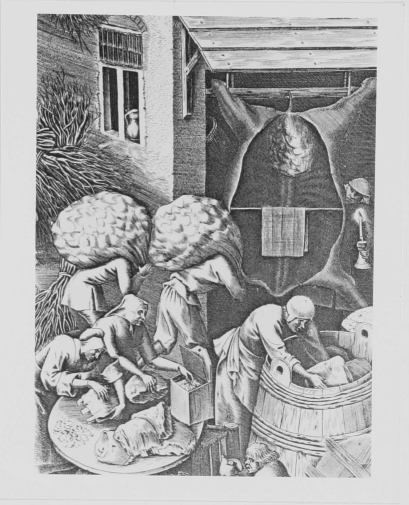 Detail from a Pieter Bruegel drawing. A beef tree, used for evisceration and butchering, is shown in the back. In the foreground, women are shown salting meat and placing the cuts in a large cask.

Salted beef has been referred to by a French 19th-century historian as the “food of sailors” and was the staple of the naval diet during the 16th-18th centuries on all European vessels—nearly every shipboard account from this period mentions salted beef being eaten on board. Before the modern technology of canning and refrigeration were available, the most effective ways to preserve food were salting, drying, smoking, making preserves, or fermentation. Due to the high humidity on ships and other practical reasons, salting was the most popular method of preservation on ships. This preference for salt is described by Eugenio de Salazar, a 16th-century Spanish explorer, in a letter replete with preternatural griping on his life at sea, now appropriately named, The Landlubber’s Lament (1573). In it, Salazar wrote:

“[…]then they put three or four large wooden plates on the table, filled with stringy beef joints, dressed with some partly cooked tendons. They called these plates ‘saleres:’ and for this reason they didn’t put on cellars for salt […] And having asked for a drink, you could die of thirst in the middle of the ocean, because they give you water by the ounce, as in a pharmacy, after too much beef jerky and salted things: for Lady Sea will not tolerate or conserve meat or fish that is not dressed in her salt. Everything else that is eaten is rotten and stinking, like the dish called mabonto that some African tribes eat. And even with the water it is necessary to lose your senses of taste and smell and sight just to drink it and not sense it.”

Salazar may have been an exceptional bellyacher, but did his complaints have any merit? Find out in the next post, which will include a step-by-step guide to make salted beef…17th-century style! 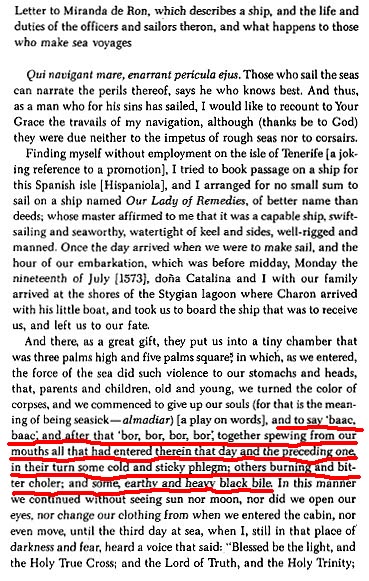 The first page of The Landlubber’s Lament by Eugenio de Salazar, Translated by Carla Rahn Philips.